49ers vs Lions: All Hail Megatron

Share All sharing options for: 49ers vs Lions: All Hail Megatron

The Detroit Lions will bring plenty of weapons to the table on both sides of the ball this Sunday against the 49ers. However, the top two would seem to be WR Calvin Johnson and DT Ndamukong Suh. They are a more complex team than these two, but these are their heavy hitters. Any offensive or defensive game plan likely starts with them to some extent. Today we'll focus on the man they call Megatron.

Calvin Johnson is actually off to the best start of his career and is on pace for career highs in every category. Most notably, he has been a crazy home-run hitter for the Lions, hauling in nine touchdowns in only five games. He is so big and so athletic that few players, if any, can hang with him as he glides down the field. The Cowboys even tried to triple team him in week four. However, they could not get even close to proper positioning to bat anything down. When a guy can jump three or four inches higher than you, what are you supposed to do?

I can say with some certainty that one thing the 49ers probably should not do in defending Calvin Johnson is this: 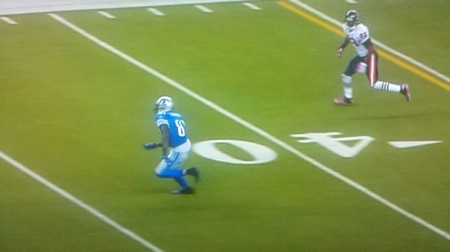 Cornerback Charles Tillman appeared to be in a zone coverage as he let Johnson past him for the safety to pick up. This is what we call a bad thing. See all that stuff around Megatron? That is called space. We do not want to see him in space. Immediately following this picture, Calvin Johnson shot past safety Chris Harris and hauled in a 73-yard touchdown pass. I am a big fan of the 49ers safeties, but I don't see how they can keep up in a foot race with Calvin Johnson.

The Lions actually spent almost the entire first quarter looking away from Johnson. Stafford looked his way once in the first quarter but was sacked before he could get the pass off. Is it possible this lulled the Bears into some false sense of security? Whatever the reason, Johnson blew them up on this play.

So what do the 49ers need to do to game-plan against Megatron? Last season he had a pair of one catch performances in which he did not get into the end zone, once in a win against the Packers and once against a loss to the Jets. I don't have tape of that so I can't really tell what either team did particularly well to contain him.

Do you stick Carlos Rogers on him and hope for the best? Or do you stick Rogers on the number two guy and sacrifice Tarell Brown, Chris Culliver, or Shawntae Spencer on Johnson? Spencer is the tallest of the group at 6-1, but considering Johnson is 6-5, I don't think height really matters with any of these guys.

The 49ers will likely spend a sizable chunk of this game in a nickel defense as the Lions are a pass-happy team. It would be somewhat similar to the Eagles game in that sense. Just with a monster of a wide receiver added into the mix. The nickel means more Aldon Smith, so maybe you just unleash The Condor (someone mentioned Barrows went with that due to his monstrous wing span; we'll give it a test run) and hope he can get enough pressure on Stafford.

Is the best bet just covering the rest of the receivers as well as possible and getting significant pressure on Stafford? Or does moving your best DB away from Johnson just set you up for three jumpball touchdowns?

I suppose there is also the option of trying to get as physical as possible with him, but given his size, is that remotely effective?