One coach who has continued to excel and is often overlooked is one of the few holdovers from the previous Mike Singletary regime. Defensive line coach Jim Tomsula, also known as the only undefeated head coach in 49ers history, has quietly continued coaching up his defensive linemen to amazing levels. Justin Smith has arguably improved since coming to the 49ers, Ray McDonald is having a huge start to the season in his first year under a new contract and Isaac Sopoaga has quietly stepped into Aubrayo Franklin's nose tackle with great aplomb.

While the talent is there, I have to think Tomsula deserves some level of credit for the continually fantastic play of the defensive line. I'm actually most curious to know how much he works with Aldon Smith for his work as a nickel defensive end. The team as a linebackers coach, but Smith spends much of his time playing on the defensive line, so I'd imagine Tomsula gets some amount of time with him.

I don't want to oversell the man, but everything about Jim Tomsula reeks of awesome. And that is what makes this picture (after the jump) all the more spectacular. 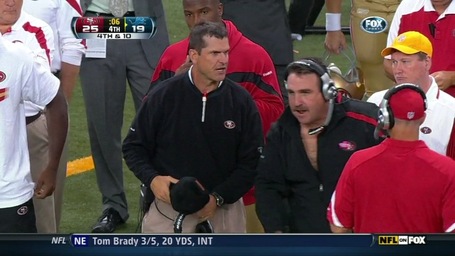 I am fairly certain he is not wearing a shirt underneath his 49ers jacket. This is not the first time Coach Tomsula has flashed a little bit of chest hair on national television. In fact, it often happens at least once a game. However, this is definitely a level I don't think we've seen thus far. It really is Jim Tomsula's world and we're just living in it.

Fooch's Note: One of our guys over at SB Nation Bay Area put together something on the Tomsula photo that almost made me spit out water I laughed so hard.