They had us worried there for a second, but the 49ers offensive line has really really stepped up the last three weeks. Frank Gore has now run for 120+ yards three games in a row. He's also averaging like 17, give or take 12 yards, a carry this season after a very slow start. I think it's safe to say the offensive line is now comfortable in Harbaugh and Roman's system. Perhaps during those first few games they had to think too much about what were doing instead of just playing.

Did you hear Ndamukong Suh's name at all on Sunday? I mean, I heard them mention him when they went through the lineups of each team, but after that he was nowhere to be found. And it's not like the 49ers didn't run the ball at him. They did that without hesitation. There was one play in particular that stood out to me, however. In fact, they ran that play at least four times. Let's take a look at what I'm talking about after the jump. 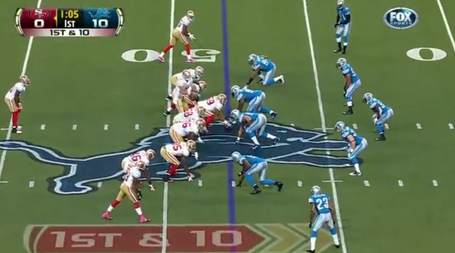 Delanie Walker and Vernon Davis are lined up off of the right tackle. Walker motions to the left and right as he gets behind Anthony Davis the ball is snapped. Walker immediately finds Suh and takes him out of the play completely with a block. Vernon Davis does a great job of sealing the edge on this play to help keep the running lane open for Gore. The whole line gets a great push on this play, really. Gore quickly gets to the second level and gains 47 yards on the play. This set up the 49ers first touchdown of the game. Oh and another thing, getting 47 yards on a run against nine men in the box is awesome. Singletary would be proud. He tried that on almost every single play. 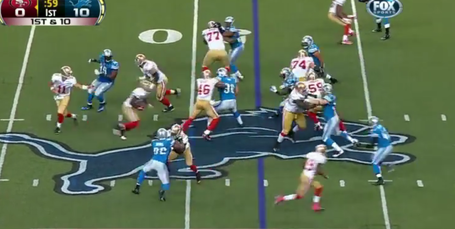 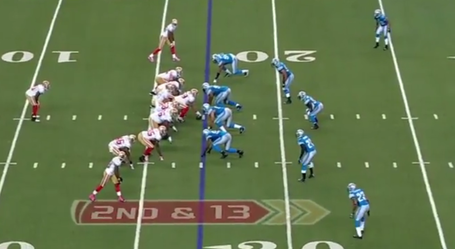 If this formation looks exactly like the formation before, it's because it is and because it's freaking genius. Walker again motions behind Anthony Davis as the ball is snapped, and he again blocks Suh and takes him out of the play. Vernon Davis sets the edge, Anthony Davis makes a nice block and quickly gets to the second level and Joe Staley Jonathon Goodwin hold their blocks. Even Ted "I refuse to stay in bounds" Ginn makes a block! You have supposed diva Michael Crabtree sprinting down the field to try to get a block for Gore as he runs for 55 yards. The point I'm trying to make is this run was a complete team effort, and I love it. This play said, "Yep. This is the same play we ran earlier, and we are going to ram it down your throat because we trust our players to execute." 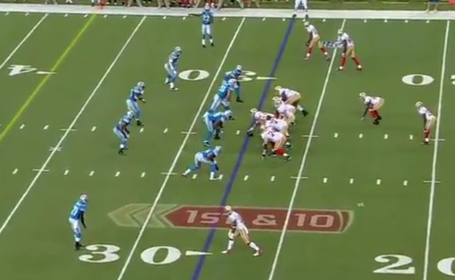 Vernon Davis is lined up at fullback on this play while Delanie Walker is split wide to the right, but then motions into the tight end position off right tackle. The 49ers pitch the ball to Kendall Hunter for an outside run to the right, which the Lions do a good job of pursuing. But they weren't expecting him to flip the ball to Ted Ginn on a reverse. Alex Smith makes a nice block in the backfield to help Ginn get to the outside. Joe Staley is the one lineman who pulls to the left and is the lead blocker for Ginn, who uses his speed to gain 12 yards. He also broke what appeared to be a tackle (gasp) and didn't just run out of bounds before being touched. Pretty good stuff from Ginn on this play, and a great play call. 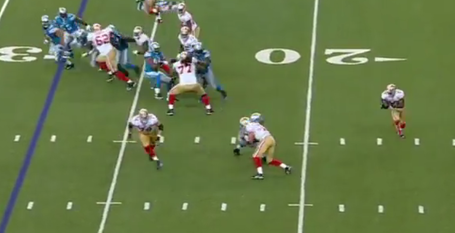 Greg Roman is a pretty impressive play caller. The 49ers were dealing with a very loud crowd and Alex Smith had by far his worst game of the season. He made a great play when they needed it, but Roman was dealing with an inaccurate quarterback for most of the game. They were not afraid to run the ball right at Suh, who coincidentally only had two assisted tackles on the day.

The first play I looked at, where Delanie Walker pulled and blocked the defensive tackle, was run at least four times in the game. Three of them were to the right and one was to the left. I'm pretty sure the 49ers averaged about 30 yards a carry on that one play alone. I love how the 49ers use Walker and Davis. They really are perfect for what Roman and Harbaugh want to do on offense. Both can block as well as create match up problems in the passing game.

I have noticed that so far this season, the 49ers seem to like to have Davis be the one who sets the edge for the run and they have Walker pull. Both players seem to have their own blocking niche. The Lions were also having a tough time figuring out if the 49ers were running or passing. Several times I saw Suh engage an offensive lineman and stop as if he were expecting a run even though it was a passing play. Credit Roman for disguising his intentions with formations.

Overall, it was another encouraging performance by the 49ers. The offensive line is playing to their expectations. What I really love seeing, though, is the blocking of the receivers. Even without Joshua Morgan, they still did a great job of blocking down field, and that's how you are able to break multiple 50-yard runs.