While you could argue that a variety of plays were pivotal in the 49ers 24-23 victory over the Eagles, in my estimation the play of the game was the game-saving play by Justin Smith. The 49ers had just taken their 24-23 lead and the Eagles had the ball back with three minutes remaining in the fourth quarter.

In four plays the Eagles moved from their 20 to their 46 and looked poised to break our hearts with a last second field goal. On 2nd and 5, Michael Vick connected with Jeremy Maclin on a short little wide receiver screen that opened up a huge lane and looked like it would allow Maclin to get down to the 49ers 31 yard line. Alex Henery had plenty of kicking struggles yesterday, but it would have been a fitting end if he got that last one right.

Thankfully, defensive end Justin Smith made one of the more athletic plays I've seen a defensive end make in some time. There are plenty of times we hear a play described as game-saving. While that sometimes is a bit of an exaggeration, the phrase would seem applicable to Smith's play. Head after the jump to check out a few pictures of it in case you missed the game. 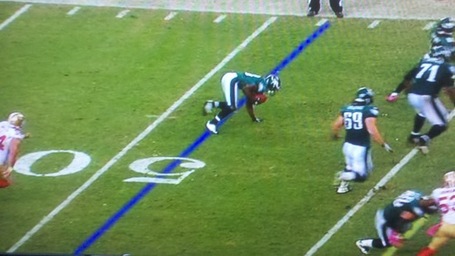 Justin Smith lined up in what looked like a nickel defense with four down linemen. Smith was lined up at the right defensive tackle position and got some quick penetration due to the use of the screen. Vick dumped off the pass to Maclin and in the picture above you can see Smith coming into the picture on the far left. Maclin has the ball just after catching it.

The key to Smith being able to make this play was probably the brief slow down for Maclin. He caught the ball and then had to use his hand to prevent himself from falling. It gave Smith an extra second's advantage that might have been the difference. 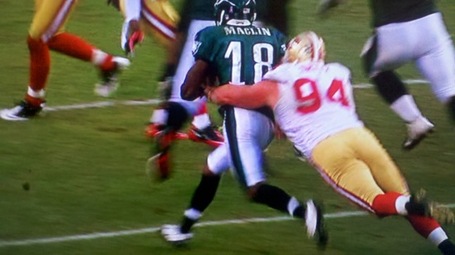 Smith caught up with Maclin which is impressive enough. Although Maclin briefly slowed down he's no slouch and it takes quite an effort for a defensive lineman to catch up with him. Smith did and in his dive he specifically made sure to get his left hand in on Maclin's left arm. A quick poke and he had made the play.

This play was a combination of under-appreciated athletic talent and the wherewithal to try and force the fumble. Dashon Goldson deserves a lot of credit for pouncing on the ball before it went out of bounds as well because if it had gone out of bounds the Eagles would have retained possession.

While the 49ers have had some bad luck at times this season, some of the breaks are starting to work in their favor a little bit. Some say that luck is when preparation meets opportunity. I don't know if that necessarily applies for crazy plays like this, but maybe it does. Either way, the 49ers made the key play when they most needed it and they now stand 3-1. I can live with that.