Somewhat lost amidst the hubbub of the 49ers 24-23 victory over the Eagles was the very brief NFL debut for rookie quarterback Colin Kaepernick. It was a somewhat bizarre situation that might have made it easy to overlook what was happening. I watched the first quarter before listening to the rest on the radio and I remember I was not looking at the television when Kaepernick came in. Suddenly Jim Mora mentioned he was coming into the game after the false start and it actually took me a second or two to figure out what the heck was going on.

Alex Smith was actually on the field prior to that play. On 3rd and 12 at the 49ers 39, the team was called for a false start, which backed them up five yards. Initially after the penalty Alex Smith remained on the field but then Coach Harbaugh decided to make the switch to Colin Kaepernick.

The team ended up calling timeout as the play clock was about to expire, but we got to see the play at least get started. The team lined up with Kaepernick in the shotgun and Frank Gore to his right. The team went with a shotgun formation with two receivers to the right, one to the left and Vernon Davis on the left side of the offensive line. 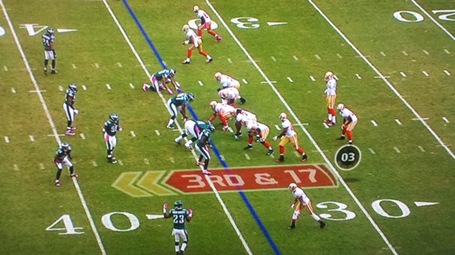 Kaepernick brought Davis in motion to the right side of the line before snapping the ball. Kaepernick made the snap and proceeded to immediately roll to his right. 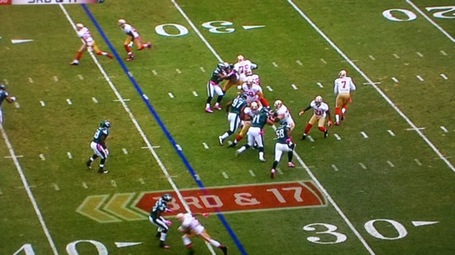 As you can sort of see, Frank Gore is moving into a blocking position and Vernon Davis is blocking as well next to Anthony Davis. The three receivers on the play are running their routes and this would seem to be a likely pass play. There might have been a run option mixed in, but given that it was 3rd and 17, Coach Harbaugh must have figured why not see what he can do with the deep pass.

It's an interesting call from that part of the field. An interception could have set the Eagles up in excellent field position. While the 49ers ended up with a simply hand-off after the timeout, if this play had been run, Kaepernick likely would have been throwing the ball. I wonder if he was told, look for a couple reads, and if it's not there throw it away. By rolling out immediately he would get out of the pocket and not risk intentional grounding.

Coach Harbaugh was briefly asked about Kaepernick and inferred the team might mix him in here and there moving forward.

With just one play you got QB Colin Kaepernick in there, was that strictly a third and long, do you have a package for him now, are we going to see some of that maybe more?

"Could be. That's all very possible and something that we've been building and practicing."

This play does put teams in a position where it's now on film and they have to at least make some note of it when they are game-planning. Not a lot, but at least a little bit.