Share All sharing options for: Scouting the Bucaneers: Running Game

The 49ers face another good test this weekend in the Tampa Bay Buccaneers. One of the keys to the game will be stopping the run, which the 49ers have shown they are more than capable of doing. They were able to shut down LeSean McCoy last week, but they will face a completely different style of back in Legarrette Blount on Sunday.

So far this season Blount has 294 yards rushing on 67 attempts, which is good for a 4.4 average. As a team, the Bucs also average 4.4 yards per carry and rank eight in the NFL in that category. The Bucs running game is very similar to the 49ers, so they they will be very familiar with what the Bucs want to do.

Their two main run plays are a single back power run, where a guard will pull, and a weak iso lead run, which is where a fullback will be the lead blocker to the weak side of the defense. In the 49ers case, that means the Bucs would be running right at Patrick Willis, who lines up as the weak-side middle linebacker.

Let's take a closer look at their run game after the jump. 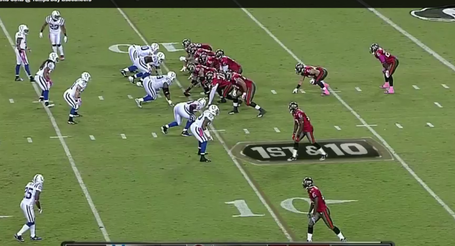 This play features the weak iso lead I was talking about earlier. The fullback blocks to the left (weak side). The Colts defense pursues to that side, which allows Blount to find room to the right side (strong) of the line. He gains 13 yards on the play. Once Blount chooses where he's going, he put his head down and keeps his legs moving until the whistle blows. 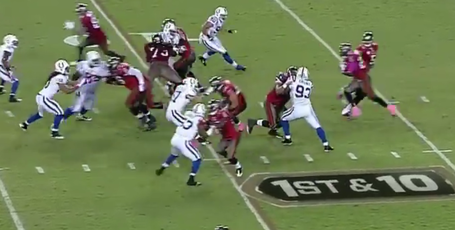 This is the single back power run play, which is the staple of the Bucs running game. The left guard, Jeremy Zuttah (#76) can be seen pulling to the strong side here. He's the lineman directly to the right of Josh Freeman if you are having trouble spotting him. The center and right guard both block one of the Colts' defensive tackles, completely taking him out of the play. Blount chooses his lane, lowers his head, and bulldozes his way for a nice gain. 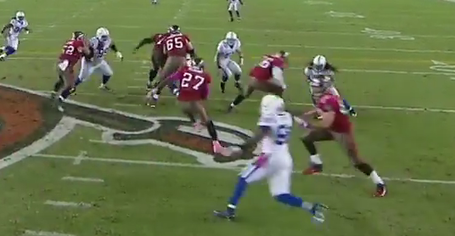 Here's a closer look at the center and right guard both blocking the defensive tackle. It also gives you a nice view of what Blount sees on the play.

Here's a play the 49ers will have to prepare for when game-planning this week. On a third-and-one the Bucs bring Josh Johnson into the game to play quarterback. This is a designed option play you usually only see on Saturdays. Johnson runs the option to the right with Blount following him for the potential pitch. Johnson fakes a pitch to Blount, which freezes a defender just enough for Johnson to speed past him for an eight-yard gain. 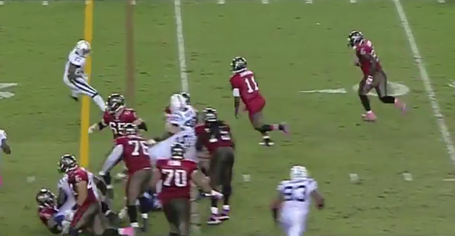 With only a yard to go, this play is nearly impossible to defend with Johnson's speed and running ability.

The Bucs are in an offset i-formation and motioned their wide receiver onto the line to the right of the tight end. Judging by how they are stacking the formation, it looks to be a run to the right. The left guard again pulls to the right and the fullback blocks the strong side as well. This is another power run, but this time there is a lead blocker. Blount starts to run to the right but makes a cut up the middle. There is absolutely no Colt defenders at the second level and he only has one safety to beat until the end zone, which he does for a 35-yard touchdown.

Big backs don't really concern me as much as fast and shifty backs do when it comes to the 49ers run defense. That being said, Blount is a load. He's not going to do much dancing. In fact, the most you will see him do is make one cut, which exactly what he did on that 35-yard touchdown run. He runs like I wish Anthony Dixon would.

The Bucs had little trouble getting a consistent push against the Colts, but their defensive line is built for the speed rush, not overpowering offensive lines in the trenches. The key for the 49ers is not letting Blount get to the second level. Once he gets there, it's very tough for smaller defenders to bring him down without letting him get an extra three or four yards.

The one thing the defense doesn't need to worry about with Blount are runs to the outside. I don't think I saw one. He's also not much of a threat in the passing game, and the Bucs like to bring in backup Earnest Graham on obvious passing downs. For example, when they ran their two-minute offense at the end of the first half last week, Earnest Graham was in for the whole series.

With Isaac Sopoaga likely out this week with a staph infection, the biggest question mark is at nose tackle. Ricky Jean-Francois is going to have to step up big time. If the 49ers can get good penetration on run plays, then Blount should be in for a long day. He's not going to juke anyone out of their shoes.