This past Friday, I had the good fortune of attending a reception at Gallery 1307 here in San Francisco where 49ers tight end Vernon Davis exhibited 13 paintings he has created in recent years. For those that were unaware, Davis is passionate about the arts, and in fact majored in studio art at the University of Maryland. He has created numerous works of art but had not exhibited them before this past Friday.

I was able to attend this exhibition and have posted some pictures from the evening after the jump. I didn't get pictures of every piece, but I did get shots of some of my favorites. You can head after the jump to check some of them out. The picture attached here at the top of this post is a picture I took of Vernon standing next to a self-portrait he painted.

It is because of his love for the arts that Vernon Davis has committed himself and much of his charitable work to arts education. This past week, Vernon Davis announced a partnership between his Davis Family Foundation and the community-based A.R.T. Ambassador Youth Program here in San Francisco. The A.R.T. program is a four year curriculum geared towards high school students who demonstrate a genuine interest in the arts.

In the most general sense, Davis is encouraging kids to pursue their dreams no matter what. While Davis has always had an interest in the arts, he said that as a kid growing up in the inner city in Washington, DC he stifled that interest to some extent because it wasn't the manly thing to do. According to Davis you either played sports or sold drugs. With this program, he hopes to help kids in similar circumstances get a chance to express themselves creatively a lot sooner in life.

I know we spend most of our time talking about football and the intricacies of the game and the San Francisco 49ers, but I also think there is something to be said for getting to know more about these players off the field. When you have "good people" on the team, it makes it that much easier to root for them.

In the case of Vernon Davis, he brings a broad mix of interests to the table that we might not otherwise know about. It is interesting to note that he actually has a business he is involved in outside of football. Vernon Davis and Antone Barnes co-founded an interior design company called Modern Class Design.

The company offers various design services for homes and commercial spaces. The company has done some work for various NFL players. I'm curious if they can do much with my modest studio apartment in San Francisco? Really I need to figure out a way to create more space. I suppose dumping some of the stuff I have around my apartment is the best way to do that. And I'd save on what I'd imagine is a sizable fee from MCD.

I spent about two hours at this evening and ended up with some fun pictures. I used my cell phone camera so I apologize in advance if they're not perfect. Big thanks to Vernon Davis, his publicists and Gallery 1307 for putting on this event. It was a unique experience for me and I really enjoyed it. 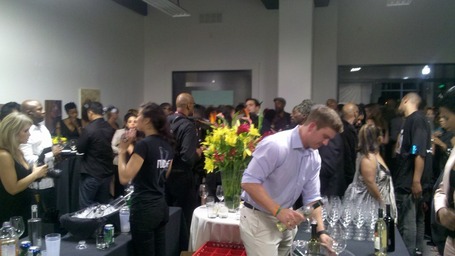 The gallery itself was not huge and there was a good sized crowd at the event. Several players made an appearance in support of Davis, including Frank Gore, Dashon Goldson, Moran Norris, Madieu Williams, NaVorro Bowman and Cleveland Browns linebacker D'Qwell Jackson. Many of the 49ers live down in the South Bay, so it was cool to see them go out of their way to support one of Vernon's passions.

It was also an interesting because a good chunk of the crowd was nothing like any sort of traditional football crowd. There were some 49ers fans, but there were just as many art students and art lovers. It made for an interesting evening interacting with folks. 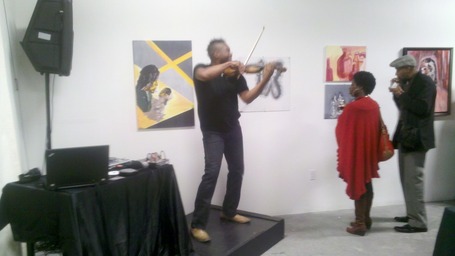 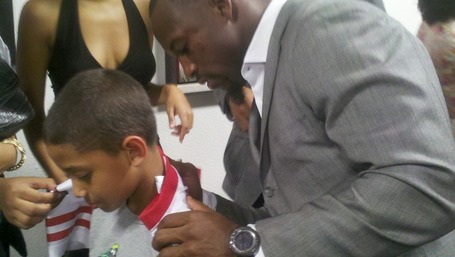 there was a kid walking around wearing a Vernon Davis jersey and it took a while but he was finally able to get through to get an autograph from Davis. A random picture, but short of him tossing the kid a jersey like in the old Mean Joe Greene Coca-Cola commercial, it was cool. 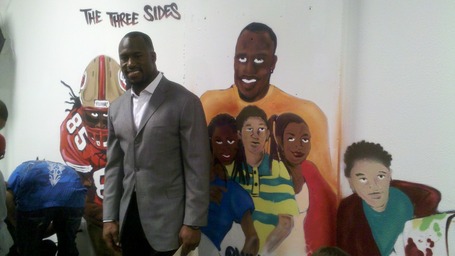 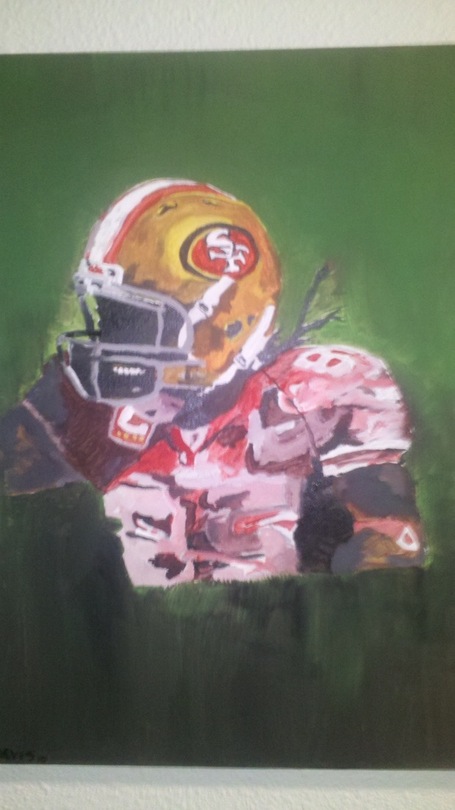 This was probably my favorite painting, showing Vernon Davis in uniform mid-play. 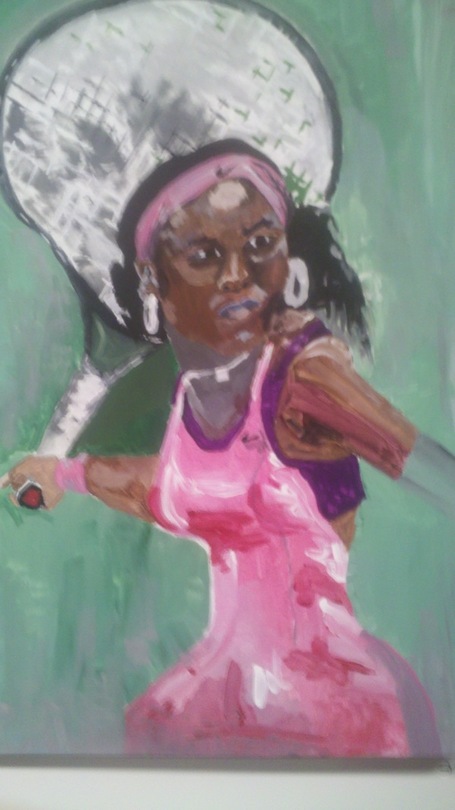 This was another favorite of mine. It was a painting of Serena Williams. I believe he met her at one point and I think played some tennis with her. I don't remember the exact details but I liked the look of it. I can't really articulate the specific details of why I like a certain piece of art. But I like something about this and that's probably all that matters. 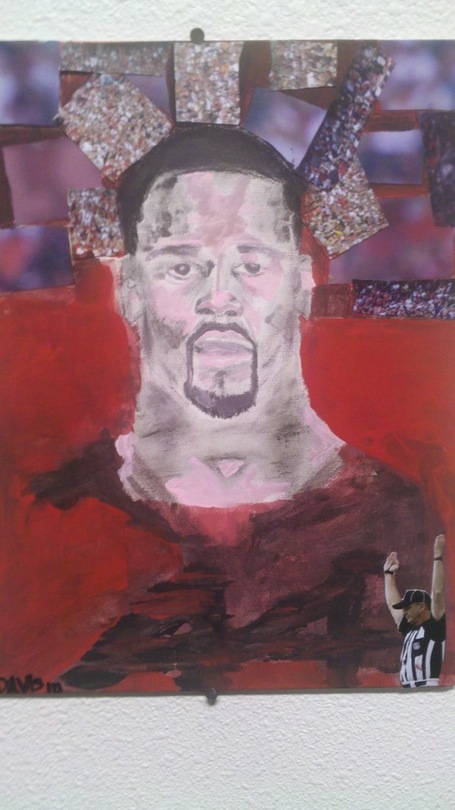 The best part of this one was the little pasted on picture of the referee in the bottom right corner. When I saw it live, it looked like it was a picture cut of a magazine and pasted on. It's random, but awesome. 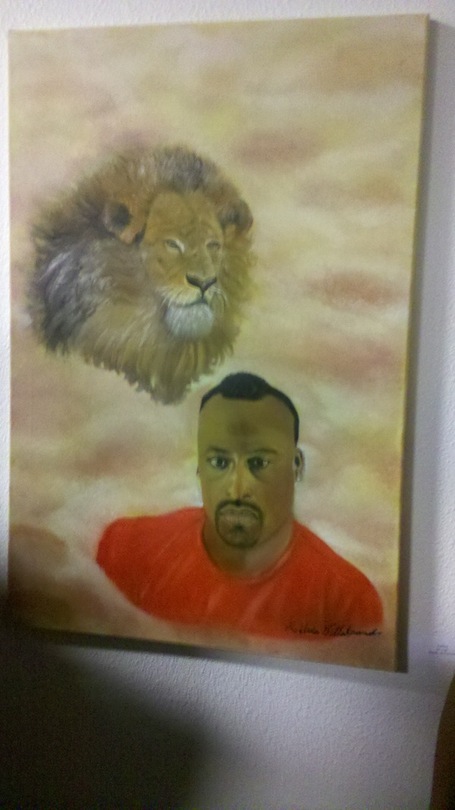 While the self-portrait is a little more rugged, this painting of himself and a lion is pretty cool. I don't recall the year of the painting so I'm not sure if it was done after his trip to Africa this past offseason. 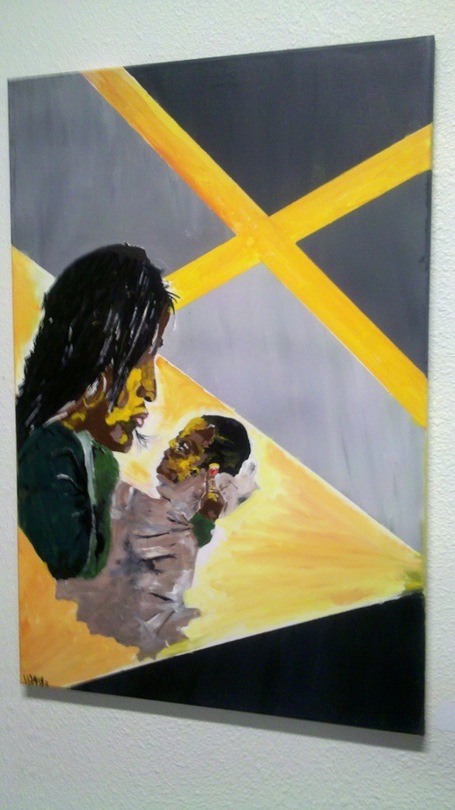 Vernon's art did include some non-sports stuff. This painting of a mother and child was my favorite of the non-sports paintings.