The 49ers made numerous big plays Sunday afternoon against the New York Giants, and the last such big play saw Justin Smith bat down Eli Manning's last pass of the game on 4th and 2 at the 49ers 10-yard line in the fourth quarter. The Giants were driving and looking to tie the game with under a minute to go when Smith made the deflection.

After the game, Smith told the media he was fortunate to get the deflection and it was basically blind luck. He knew to get his hands up when he couldn't get pressure past the offensive line, he raised his hands and hopped in the air (big men like that don't really jump) and batted down the pass.

I've posted a picture of the deflection at the end of the post for your viewing pleasure.

Matt Maiocco pointed out something interesting in his defensive player review based on Jim Harbaugh's own comments on Monday. In reality, Smith's deflection, while somewhat "lucky", also might have have had to do with a lot more than just blind luck. In his press conference yesterday, Jim Harbaugh addressed the whole issue of it being a "lucky" play:

How Justin Smith knows that, just an example of him thinking through the game and communicating that to Ray, and sure enough [Giants QB] Eli [Manning] sets up and tries to hit that little short post throwing right through the b-gap and there's Justin to knock it down. I read Justin's comments that he was tired and that he was just lucky to be standing there and put his hands up, but that wasn't the case. He was thinking it through and just as he had foreseen, that ball came his way and he was there to knock it down.

If you're looking for a reason why Justin Smith is so valuable (if you didn't know already), that just about covers it, wouldn't you think? How about co-MVP with Patrick Willis? Just take home all the awards! 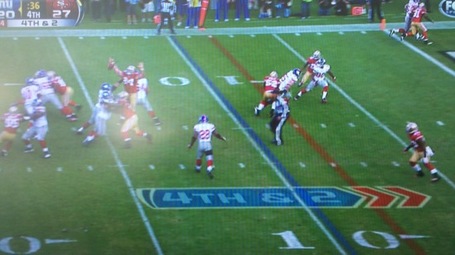