49ers Vs. Giants: My Favorite Play Of The Game

Share All sharing options for: 49ers Vs. Giants: My Favorite Play Of The Game

The 49ers victory over the New York Giants had numerous important plays that led to the 49ers eventual win. Vernon Davis had a huge touchdown catch, Carlos Rogers had two big picks and of course, Justin Smith had the key pass deflection late. However, one of my favorite plays from the game was the 49ers two-point conversion throw after vernon Davis' touchdown.

It was the team's first two-point attempt of the season and they executed it perfectly. They ran a basic formation with split backs and two wide receivers lined up to the right side. Crabtree ran in motion to the right and the wide receivers did an excellent job blocking their receivers so Alex Smith could get the quick two-yard pass to Crabtree for the conversion. Head after the jump for some pictures and analysis. 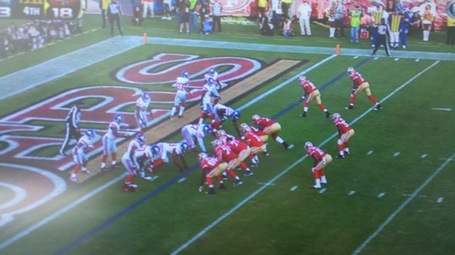 The 49ers have been known to line up with Vernon Davis or Delanie Walker in the backfield, but they rarely use a receiver back there. I believe Ted Ginn might have lined up in the backfield once or twice, but otherwise this appears to be the first time we've seen this formation. Out right are Ted Ginn on the line and Braylon Edwards off the line. 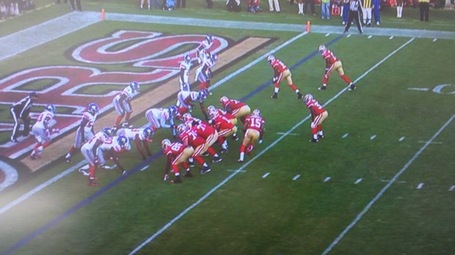 The 49ers sent Michael Crabtree in motion. On the far left of the picture you'll see cornerback Corey Webster starting to move in motion as well. Webster was on Crabtree from the beginning, but by forcing him to come across the field, it set up perfectly to leave Crabtree wide open against the Giants man-coverage.

After the snap, Alex Smith and the o-line immediately went right. Crabtree started to cut up but then flattened out his route to about a yard or so into the end zone. In the top left of the picture, Webster has to cut his run up towards the back of the end zone just a bit to get around his teammate (I believe it's #37 Michael Coe). By this time there was no way Webster was going to be able to get down to Crabtree in time to break up the pass. 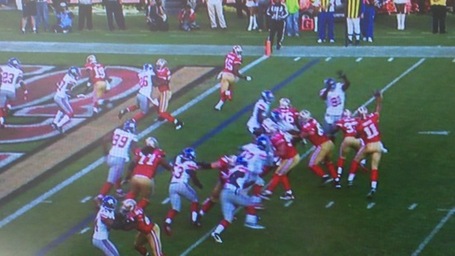 It took a total team effort to complete the conversion. Braylon Edwards can be seen just to Crabtree's left getting extremely physical with safety Antrel Rolle. This prevent Rolle from getting down into the flat and breaking up the pass. Additionally, Ted Ginn went a little bit deeper in his route and neither Coe nor Webster were going to be able to get around him. While he didn't physically block anybody, his route essentially blocked them further out of the play.

This is the kind of play I wouldn't mind seeing mixed in a bit more in the red zone. Maybe not this specific play, but things like this. I am a big fan of creating these kinds of mismatches and a bit of misdirection to open up some plays on the field. It's a fairly simply play in execution, but it utilizes so many different skills this 49ers team possesses.