Kyle Williams: Will The 49ers Continue To Increase His Role?

Share All sharing options for: Kyle Williams: Will The 49ers Continue To Increase His Role?

In last Sunday's game versus the Cardinals, Kyle Williams had what many have dubbed a "breakout game" hauling in five passes for 54 yards and a touchdown. While this was certainly Williams' biggest-game-yet statistically, it's up for debate whether or not it was a true "breakout game".

Still, we were able to see a bit more of the skills that he has for the wide receiver position...and with Braylon Edwards not looking right, Joshua Morgan on injured reserve with a broken leg, it stands to reason that we could see more of Kyle Williams from here on out.

I've been personally banging the drum for this kid all season long. I know DrewK has long felt "KW" (or K-Dub) was a legitimate starting-caliber WR if he only got a chance. From what we've seen on the field, he does appear to have a natural skill-set for the position: He's extremely quick/shifty, runs good, clean routes, has great hands, and is elusive running after the catch.

With the passing game seemingly more "open" the last two games, will we continue to see Williams' role increase in the offense? Should he see more time, perhaps in favor of another player, such as Edwards?

I say, "Yes!" Jump with me to discuss further.

Williams worked with Alex Smith quite a bit this off-season at San Jose State, including the "Camp Alex" time, as well as additional work. He's sure-handed and seems to have a knack for getting open, as well as getting first-downs. Each of his five catches Sunday were for a first-down (or touch down).

He's fast enough to get separation deep down the field and has the hands to haul in those passes, too. He's also a fearless blocker and goes over the middle of the field, as he did in college.

The other factor to consider is that there isn't much NFL tape on Williams. Teams won't have as much to study in order to stop him...and might not dedicate much time to him anyways with his limited production thus-far. He could be a sort of "secret weapon", at first, anyways.

For your enjoyment, here are a few pics of some catches Kyle made in the game Sunday. 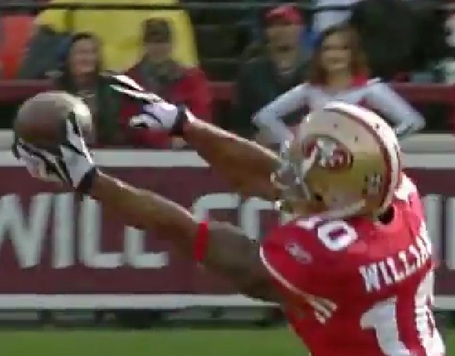 This was his first reception (above). Notice the ball was thrown quite a bit in-front and he made a nice grab to pluck it out of the air (then run for another seven yards). 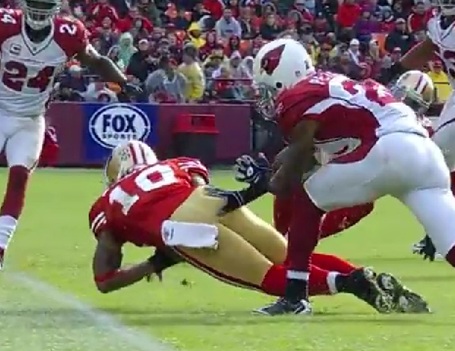 So what's the verdict? Will we see more of Williams beginning with the big "HarBowl" showdown on Turkey-Day?