Do You Remember These Days?

Share All sharing options for: Do You Remember These Days?

After the jump I've posted a screenshot from Bleeding Green Nation. Yesterday they had a discussion about whether fans were rooting for a win or loss today for draft purposes. The results are close to dead-even.

I certainly don't want to wish ill will upon another team since the 49ers have shown how quickly a franchise can fall apart, but given the performance of the 49ers this year, it's kind of nice to realize how far they have come. I know not everybody roots for losses for draft positioning, but the 49ers are not too far removed from the days where draft positioning was of considerable importance. Hopefully it will be a long time before we as fans have to even consider that issue again. 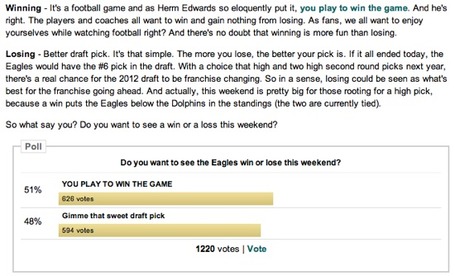