The San Francisco 49ers do not always run the most exotic plays, but they can do some very interesting things from time to time to keep opposing defenses thinking. Their collective of speedy wide receivers and tight ends has put them in a position to find a great deal of success with reverses and other such misdirection plays.

Against the Rams on Sunday, the 49ers used Ted Ginn Jr., Delanie walker and Kyle Williams on three running plays. IN those three plays, they gained 55 yards, with all three plays gaining double-digit yards. The 49ers have had a good deal of success running misdirection plays with their receivers and tight ends and it allows them to loosen up the defense a little bit when they start sending those receivers and tight ends in motion.

My favorite of the three misdirection plays on Sunday was the fly sweep they ran with Delanie Walker. I did not know the name of the play until Coach Jim Harbaugh mentioned it during his press conference this afternoon. The play gained 14 yards and was another example of the creativity of the staff. Each week it seems like they roll out one or two new plays that haven't been used before. They don't always succeed (see their Wildcat attempts), but they do provide one more thing opposing defenses have to consider. 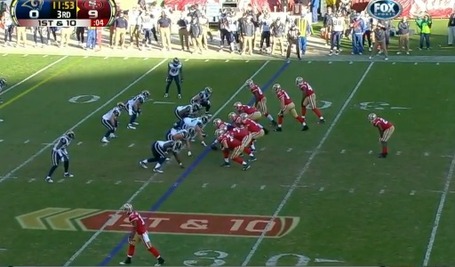 The 49ers lined up with a trips set on the right and Frank Gore alone in the backfield. Delanie Walker is the player on the far right of the trips group. They have lined up in this backfield for passing plays several times this year. 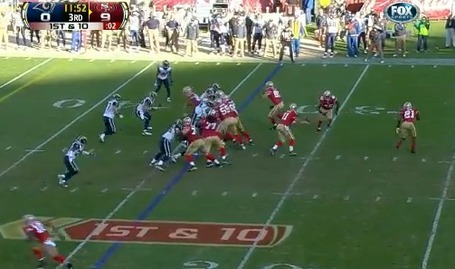 Frank Gore cuts to his right and Alex Smith goes to pitch the ball. However, Delanie Walker has cut inside and will eventually take the pitch back to the left side of the field. It is not a wildly complicated play, but when you've focused your rushing attack on Frank Gore through the first two quarters (this play took place early in the third quarter), the misdirection is set up. 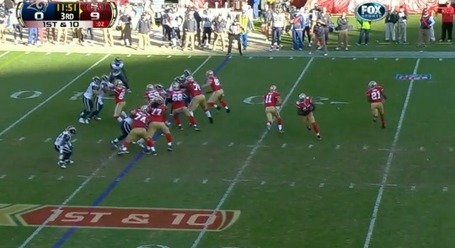 Walker has the ball in this final shot. There are at least eight defenders in the box moving to the right side of the field. You'll see the one defender to the left of the 49ers offensive line. He had a shot to take down Walker at the line of scrimmage, but Walker gave the defender a little shake and bake and broke an arm tackle to get to the corner and pick up 14 yards.

Now that college football is over this doesn't apply, but one thing I always enjoyed during the last three months was watching Stanford play on Saturday and then the 49ers play on Sunday. Virtually every week, I saw at least one interesting play in the Stanford game that I also saw in the 49ers game. That is not exactly shocking given the shared coaching staff, but it is still pretty interesting.