Share All sharing options for: Kyle Williams: 0 To 60 In A Flash

One of the players making a strong case for more playing time is 49ers wide receiver Kyle Williams. He hasn't had a ton of opportunities, but he has done a great job with those he has received. This past week against the Rams, with Braylon Edwards sidelined with knee issues, Williams put together the best game of his brief NFL career. He caught two passes for 66 yards and had an end around that he ran for 17 yards.

Williams played a career-high 34 snaps in the game and we saw him do a few things incredibly well. The most impressive skill shown was his acceleration. Williams ran an official 4.43 40 at the 2010 NFL Combine, which was tied for ninth among all participants. Raiders WR Jacoby Ford led the way with a 4.28 40. A player's 40-yard dash time is of some value, but given that it occurs without pads in a non-football environment, it also should be taken with a certain grain of salt.

All that matters for the 49ers is that once Kyle Williams catches the ball, he can accelerate as well as anybody out there. Add in some solid route running on his 10-yard catch and a filthy stiff arm on his end around and he is bringing more and more to the table. After the jump I've got some screen catches of two of his big plays. In the meantime, it will be interesting to see if the 49ers are maybe even more conservative and sit Braylon Edwards for one more week against Arizona.

His first significant gain came on an end around. He lined up in the slot to the left and came around after a fake handoff to Gore up the middle. In the picture below, Williams (#10) is a couple yards from the first down and is surrounded by Rams. #98 is just start to see him, but the player just beyond has an open shot at Williams. Or so he thinks..... 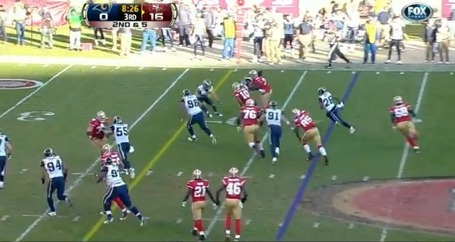 As this next shows, Williams turns on the jets and blows past the two defenders with relative ease. I don't have video of it, but he went to his next gear to get through the defenders before getting tackled eight yards later at the Rams 17. 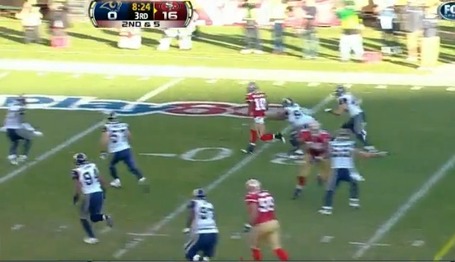 This post is focusing on Williams speed, but the end of this run showed how physical he can get it, even for a guy that is not a huge player. As this picture below shows, Williams used a vicious stiff arm against defensive back Quintin Mikell to get the final six or so yards of this run. It doesn't appear here, but Williams sent Mikell to the ground with that stiff arm. 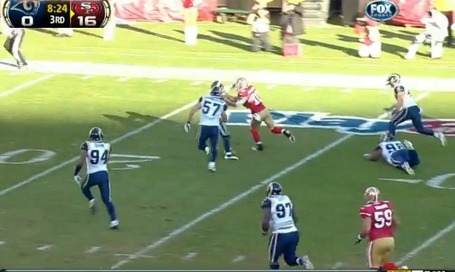 This next series of pictures are of his 56-yard touchdown catch. He ran a fairly quick route past the sticks to get the first down. The Rams defender played off Williams however, so he was able to catch the ball, turn and begin his acceleration for some quality yards after the catch. 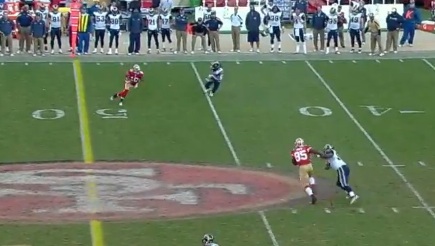 Here we see him with a couple defenders around him. They're relatively big guys but even still, they're within a yard of him. The good news: there is not a soul in front of Williams for the next 38 yards. 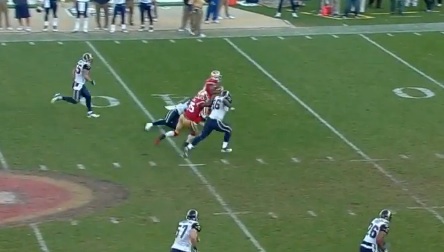 He once again kicks it into another gear and takes it to the house. As the picture below shows, he's put a solid five yards between himself and the defenders and is not going to be touched the rest of the way. 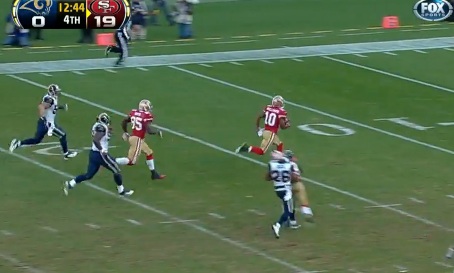