The 49ers put together another stellar effort on Sunday as they defeated the Rams 26-0 and earned their first shutout of the season. They had a crack at a shutout a few weeks ago against the Arizona Cardinals, but a late Larry Fitzgerald touchdown dashed those hopes. Given how well the defense has played this season, it was nice to see them get a shutout this season. Hopefully they can secure a second shutout this weekend against Arizona.

Matt Maiocco did his player-by-player review of the defense and as we've done the last few weeks, I thought I'd focus in on five specific plays. It was a day loaded with solid defensive efforts, particularly with Larry Grant ably filling in for Patrick Willis. I'll go backwards from five to one because my choice for number one has pictures and I want to save that for the end.

This was as much a bad idea by the Rams as it was great defense by the 49ers. It came in the fourth quarter with the Rams down 26-0. They lined up in the shotgun and handed the ball off to Steven Jackson who appeared to be going off left tackle. Austin Pettis was in the slot and came the other way, at which point Jackson shoveled him on the ball on the reverse. Bad idea. The 49ers defense was not fooled and Bowman wrapped him up for a six yard loss. Not really a game-breaker kind of play, but typical of the day for the Rams.

This shows what a solid pass rush can do. On first down, the Rams ran play action, sending Steven Jackson to the right. Tight end Lance Kendricks was going left and went to block Parys Haralson. Haralson easily maneuvered around Kendricks and got a hit on A.J. Feeley just as he passed the ball. It was close enough that Feeley might have gotten it off before the hit, but he was feeling the heat and badly underthrew the pass. The pass came down right in Goldson's arms.

The Rams were facing a 3rd and 10 with 1:08 left in the second quarter. They ran a play from the shotgun and the 49ers sent Donte Whitner on the blitz. The tight end picked up Whitner well and the left tackled picked up Justin Smith fairly well. The problem with that is it left a wide open hole for Larry Grant who came in untouched and blew up A.J. Feeley. It was another example of how the Rams could get nothing going. Grant had a strong performance on Sunday, and while it did happen against a struggling Rams team, much credit to Grant for coming off the bench and stepping up.

The 49ers were leading 3-0 early in the second quarter when the Rams lined up for a 3rd and 9 at their own 14. A.J. Feeley took the shotgun snap and Ray McDonald and company immediately began collapsing the pocket. Feeley stepped up as he is supposed to and as he reached back to throw the ball, McDonald got the slightest bit of his right hand on it. McDonald was pushing Jason Brown back but managed to get his right hand over to get a piece of the ball.

The ball popped down and Aldon Smith jumped on it. Smith had been sort of pushed out of the play by left tackle Adam Goldberg (more on him in a minute), but he kept pushing on the play from behind and was able to fall on the ball for the recovery. The 49ers were unable to get a touchdown out of the turnover, but it was more great pressure.

Ray McDonald really has been a revelation this season as the starting left defensive end. He was always a solid pass rusher, but he has brought the complete package since getting his new contract. There are often concerns a player will slack off after a big contract, but McDonald has taken his game to a whole new level. He has been worth every penny in part because of his dominant play, and in part because the decision to let Aubrayo Franklin walk and move Isaac Sopoaga to nose tackle was key. Check out some comments defensive line coach Jim Tomsula had about McDonald on Monday.

1. Aldon Smith bullrushes Adam Goldberg to get his first sack of the game

Aldon Smith has had an excellent 2011 campaign rushing the passer, and prior to Week 13 had shown off some excellent moves. He has primarily focused on technique, athleticism and speed to get past offensive linemen and grab his sacks. However, against the Rams we saw a perfect example of his sheer power.

In the picture below, Aldon Smith is at the top right and he is basically just pushing down Goldberg. Aldon Smith is listed at 258 pounds. Adam Goldberg is listed at 305 pounds. Even though there might be issues of balance involved, this is still incredibly impressive. Justin Smith is one of the masters of the bullrush and I'm guessing he and Aldon have worked on it a little bit. 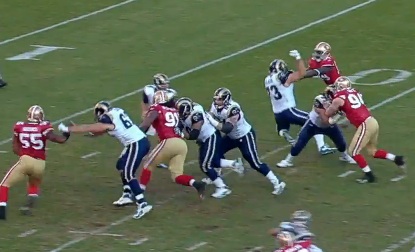 This next picture is Aldon Smith actually making the sack of Feeley as Goldberg lies helpless on the ground. Oh so entertaining! 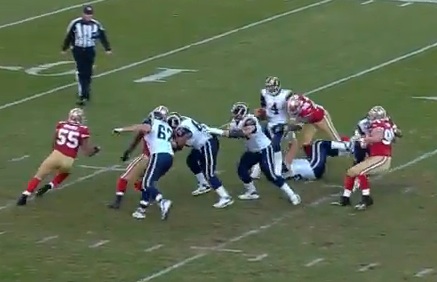