The San Francisco 49ers went into halftime leading the St. Louis Rams 9-0, unable to punch in three separate visits to the red zone. While the 49ers were largely in control of the game thanks to a dominant defensive effort, touchdowns would have been nice to get some more breathing room and put the game away. Early in the third quarter, the 49ers did just that.

On the Rams drive to open the second half, Dashon Goldson intercepted a 2nd and 11 pass to set the 49ers up at the their own 12 yard line. The 49ers ran three separate runs to set themselves up at their own 48 yard line. Frank Gore picked up six yards on a run to the left end, Ted Ginn Jr. picked up 16 yards on an end around from the slot, and Delanie Walker picked up 14 yards on the fly sweep play.

On the next play, the 49ers ran a perfect play action pass that resulted in a 52-yard strike from Alex Smith to Michael Crabtree. The play broke the game open and sent the 49ers on their way to the division title. The 49ers were never in danger of losing this game, but this is still a sweet play to watch. I realize the 2011 St. Louis Rams are not the best team to use as examples of how to do things, but that doesn't mean we can't enjoy blowing them up for big plays.

I was able to review the play on NFL Game Rewind and thankfully this was one of the plays with coaches' film available. Rewind shows the general game broadcast, but they mix in a few plays from the coaches' film for each game. It is often big plays as we see with this touchdown pass.

Arguably the most important part of this play, assumed from the Rams poor coverage and Michael Crabtree running the correct route, was Ted Ginn. In the picture below, Ginn started on the far left and run about 10 or so yards up and then crossed to the right. Crabtree was on the right side of the field and is off camera in a one-on-one matchup. In the picture below, you see a safety playing center field at the top of the screen shot. 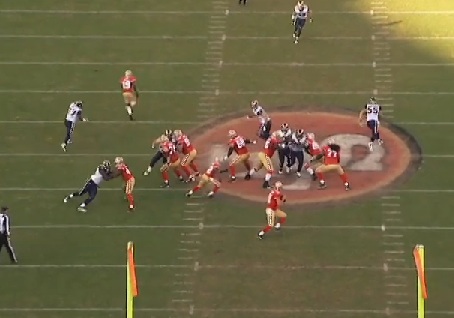 In this next shot, you see Crabtree in the top right corner turning into what looked a bit like the post part of the pattern. He established separation with a slight move at the line of scrimmage that allowed him to get inside the defensive back. More importantly, Ginn is running his crossing route along the 35-yard line. The defender just beyond him is that safety that was in center field in the picture above. He committed to go after Ginn and that left Crabtree with the monster opening up top. 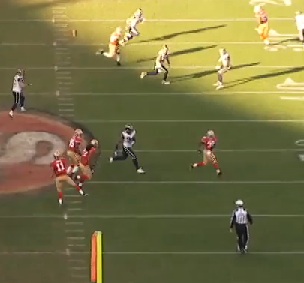 You can see three defenders around Ginn, with one of them being the safety mentioned above. The safety came down to cover Ginn and with Crabtree already on the inside of his man, a good pass from Alex Smith equals a home run.

Initially I was confused why the safety rolled down to Ginn when there are two other defenders in front of Ginn. The play-action at the beginning helped to set the play up. When Ginn started his route and Alex Smith faked the handoff, the left corner and the second safety were both down close to the line. They let Ginn off the line without even a bump. Neither kept up with Ginn and he was wide open in the middle of the field. After he started crossing over the safety broken down to cover him, but Alex had already fired deep and the play was over.

Ginn actually could have broken off the route before crossing and turned it into a corner route. Had he done that, the top safety would have had to commit to that instead and either way Crabtree remains open. I don't know if it was the play-action or just horrible coverage, but the guys around Ginn really opened this up for the 49ers. It is always nice of the Rams to offer this kind of thing up.