It's safe to say the Jim Harbaugh courtship of Alex Smith is taking a fairly significant step forward. It remains to be seen how things will play out in free agency, but Harbaugh's comments on Murph & Mac this morning would seem to indicate he'll put together a bit of a full-court press when it comes to Smith. Harbaugh had this to say this morning (thanks to Barrows for transcribing most of this part):

I like Alex and I like being around him and I like what I see on tape. It's really come up a lot and it is really not that complicated of a thing. This is a somewhat simple thing. We are going to get the best possible quarterbacks on our football team. Then we're gonna throw the balls out there and they are going to compete for it. I believe starting quarterbacks are not anointed. That is an earned position. It's about as simple as that.

You gotta go back to football being a pure game. It is that. It shows up on the tape. It is my job to do the best evaluation for the organization and get the best quarterbacks that we can on our football team. Then we will go play and that position will be earned
....
I'm not gonna hide my feelings. I like Alex Smith. I like him as a football player, as a person, and he'll make the best decision for him. Some people say Alex Smith needs a fresh start, needs a new place to be or whatever. I say, 'Let that place be here."

Part of Harbaugh's comments likely come out of necessity since the available QB options are somewhat limited. There are players that could eventually be had by trade, but a workable trade requires two teams coming to an agreement. There is also the possibility that the CBA will lead Smith back to the 49ers because of the circumstances surrounding player movement and a work stoppage. Finally, the 2011 NFL Draft lacks the 100% clear-cut guy who can come in and start from day one like a Peyton Manning or Sam Bradford.

Given all that, it's not surprising to see this developing relationship. And really it's fitting given that Valentine's Day was earlier this week. Speaking of which, thanks to wjackalope for another solid graphic for us. It certainly seems as though Coach Harbaugh is smitten with Alex Smith. It makes me wonder what it is that sucks people in. For Coach Harbaugh is he just a victim of circumstance, or has Alex Smith shown him something that has enamored the coach? Smith has his physical issues, but I'd imagine any conversations would not be limited given Smith's general intelligence and ability to handle himself.

I won't say this situation is getting completely weird, but the descriptions around the web are amusing. Mike Sando referred to it as a courtship and Matt Barrows had the line of the day in a tweet: "JH continues to woo AS. Get a room guys .." I love the use of initials. This is officially like some kind of high school romance. Given all that 49ers fans have gone through since 2005, it's really fitting that things take a turn for the amusingly absurd. If this really was high school, we'd already see JH ♥ AS written somewhere on Facebook. 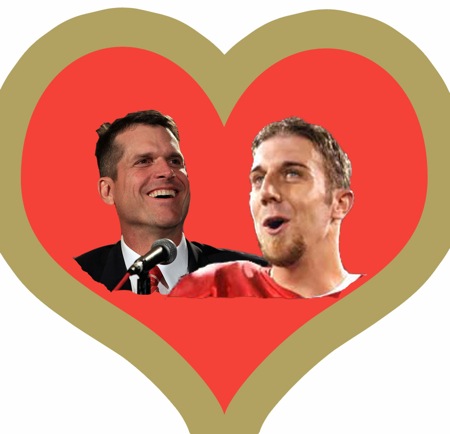