It's time again to take a look at some of the better players that will be next years rookie class. Last year, I took a look at 100 of the more intriguing prospects of last years draft class. This year, we'll be scaling back and switching it up just a bit and take a look at 50 of the top prospects 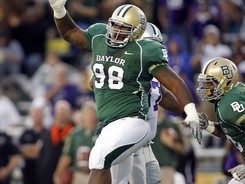 In doing this, the concept is to look at both some of the top prospects at each position, but also in doing that, look at some players that may fit well with the 49ers.

If you are a fan of another team dropping by to check out the piece, as there was last year, feel free to ignore any Niners specific topics and give your own feedback on that particular player.

Last years 100 in 100 piece received a ton of attention, and some of the posts were linked to CBS Sports.

If you didn't get a chance to look at any of the posts last year, you can go here to check them out and see how I did with the predictions. There were a few that I was off by a few rounds but for the most part, I was really accurate.

With that let's take a look at Phil Baylor, perhaps the best nose tackle entering this years draft...

This video illustrates some of what Phil Taylor is going to bring to the NFL. You'll notice pretty early in to the video feed that Taylor does not quit on plays. This was something he he did extremely well on a consistent basis. However, the third play in shows that he still has work to do in the department of getting off blocks.

At nearly 360 LBS., Taylor will be a huge obstacle for offenses to run on up the middle. In most cases, he is taking on a center and a guard and still coming out on top.

Not too long ago before all the off season events, Taylor was being considered to be a second or third round selection, but in recent weeks, most people have seen Taylor for what he potentially is; a dynamic football player. There's little doubt now that Taylor will be selected on day one.

However, there's always a chance due to multiple factors that he would be selected in the second round on day 2 of the draft.

Here is a look at Phil Taylor's stats:

Summary: I believe that Taylor can have success in the NFL. However, I always have my doubts with lineman coming in to the league and having immediate success. It always seems to take defensive linemen more time to develop for whatever reason unless they're freaks like Ndamukong Suh.