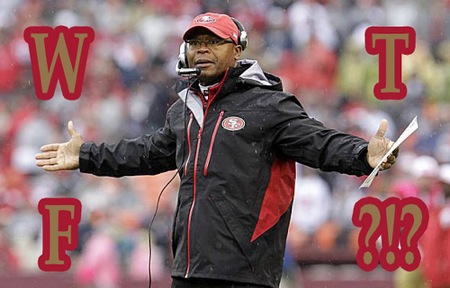 Following the 49ers convincing victory against division rival Seattle, they had to travel across state and play the San Diego Chargers on short rest. This was actually a must win game for San Diego, much more than it was for the 49ers. The Chargers needed to win out and have Kansas City faulter towards the end of the season in order to make the playoffs. San Francisco, on the other hand, could lose this game and win out against the NFC West to take the division.

As you will see after the jump, one team played with urgency and the other team didn't.....

Note: This is going to be a shorter game review because their really wasn't much to highlight in this game.

San Diego won the toss andelected to receiver. Following the opening kickoff, the Chargers took over at their own 23. Ryan Matthews carried the ball 5 yards on 1st down, and Phillip Riversconnected with Randy McMichael for 9 yards to move the chains. On the third play of the game, before fans could even get comfortable, Phillip Rivers hit Vincent Jackson for a 58 yard TD down the right hash. I understand it was a great catch, but the 49ers secondary didn't do themselves any favors. (7-0 San Diego)

San Francisco took over at their own 25 with just over 12:00 remaining in the 1st quarter, and already down by 7. Kevin Burnett sacked Alex Smith for a loss of two yards on the first play of the drive. After Brian Westbrook gained 7 off the left end, Alex Smith hit Michael Crabtree for 9 yards and a first down. However, the drive would stall there. Anthony Dixon gained 8 yards on 1st down, but didn't pick up an inch on 2nd down. After an unnecessary timeout, Smith would miss on a pass to Delanie Walker on 3rd down; San Francisco was forced to punt.

San Francisco's defense stood up a bit on the Chargers next drive. After converting a 3rd down successfully, San Diego had the ball outside their own 20. Mike Tolbert gained 5 yards off of right guard, but on 2nd down Patrick Willis blew up Jacob Hester on a screen from Rivers for a loss of 8. On 3rd down, Justin Smith broke up an attempted mis-direction to Darren Sproles forcing a punt.

Both teams couldn't get anything going and went three and out. San Francisco return man Ted Ginn picked up 23 yards on the ensuing punt return, and the 49ers had great field position at their 42. Finally, the 49ers got something going. Anthony Dixon gained 6 up the middle, and Alex Smith hit Josh Morgan for a 13 yard gain in front of Quinton Jammer. On 1st down from the Chargers 39, Anthony Dixon broke off of two tackles and gained a strong 17 yards. The quarter would end with two short Brian Westbrook runs. (7-0 San Diego, End of 1st Quarter)

San Francisco started the 2nd quarter with 2nd down at San Diego's 10 yard line. Smith hit Walker for 3 yards, who was gang tackled by Antwan Applewhiteand Antoine Cason. On 3rd down, Alex Smtih scrambled left for a TD, apparently breaking the plane. However, San Diego challenged the TD call and the play was inexplicably reversed. On 4th down Anthony Dixon couldn't get into the end zone, and the 49ers came up empty.

This is where the game changed for good. San Diego,starting from their own 3, would go on a long, time consuming drive. The Chargers ran the ball three consecutive times, barely picking up a 1st down. On the final play of the set of drives, 49er defensive end "accidentally" pushed a referee in the back. I say accidentlybecause it was evident that Smithdidn't realize he was pushing a referee. However, it ended up costing Smith the game, and hurt the 49ers big time. On the next play Phillip Rivers connected with Kory Sperry on a screen, Sperry took it down the left hash for 35 yards and to the 49ers 42. Nate Clements proved he couldn't cover Vincent Jackson on the next play, a 15 yards completion from Rivers. Eventually, the Chargers drive would stall at the 49ers 7; and Nate Kaeding connected on a short 24 yard FG (10-0 San Diego)

Alex Smith connected with Josh Morgan for 26 yards on the first play of the 49ers next drive, setting them up in San Diego territory. However, two short Westbrook runs anda sack on Alex Smith forced the 49ers into another punting situation. San Diego did not waste any time pretty much putting this game away before the half; not without help from the 49ers. On 3rd down and 10, Tarell Brown was called for an unnecessary roughness penalty and three plays later Phillip Rivers hit Vincent Jackson for an 11 yard TD (17-0 San Diego, End of 1st Half)

As if it could not get any worse, Ted Ginn returned the opening kickoff of the 2nd half 85 yards for a TD, but a dumb 15 yard face mask penalty on Moran Norris brought it back. Norris wasn't even really in the play, but cost the 49ers a chance to get right back in the game. Accordingly, the 49ers went three and out.

San Diego got the ball at their own 42, and the 49ers just couldn't stop the running game. Ryan Matthews and Mike Tolbert combined for 29 yards on the next four plays; pretty much running into the void that was caused by Smith's absence. After a few dink and dunk plays and 1st downs; San Diego had the ball at the 49ers 12, it was now the Mike Tolbert show. He ran the ball for 12 yards on the next four plays, the final rush going for the Chargers third TD of the game(24-0 San Diego)

In what would be a continuing theme in the game the 49ers went three and out, once again; San Diego was on the move once again. Ryan Matthews gained 3 yards on first down, Ray McDonald would be called for an off-side penalty, and Matthews would pick up 2 yards and move the chains (24-0 San Diego, End of 3rd Quarter)

Four plays into the 4th quarter Phillip Riversconnected with Vincent Jackson for a 21 yard TD pass; this was getting embarrassing. (31-0 San Diego)

The 49ersfinally got something going on their next drive as they went to the spread offense. Smith hit Ginn for 9 and Morgan for 19 before over throwing Morgan on the ensuing play andthree plays later Stephen Gregory would intercept a Smith pass and return it 41 yards into 49er territory. A few plays later Nate Kaeding would add to the misery with a 39 yard FG (34-0 San Diego)

Brian Westbrook got the 49ers on the board with a 3 yard TD run in scrub time (34-7 San Diego, End of Regulation)

Words can't even begin to describe how embarrassing that performance was tonight (Fooch, 12/16/10)

I'm trying really hard to figure out Why Norris is on this team. The only thing I've heard that makes sense is that Frank wants him on the team. Wasted space. (Jaxson876, 12/16/10)

god we suck Today just showed how far this team is from any kind of success. This team needs to get rid of this coaching staff and just completely rebuild the offense here. Secondary is terrible. Why is goldson even on the field. Draft a QB, CB and get a good coach (ninerafficionado, 12/16/10)

I blame edggy he decided to watch the game at home and not at the casino I believe the niners haven't lost a game when Edggy is at the casinos. (manraj7, 12/17/10)

On whether he watched the film and if he has come to any conclusions on the game:

"Well, there are a number of reasons that it happened, but not really going to get into all of those things. For me, the quicker we put San Diego behind us, the better. I think as a team, as a coaching staff, we look at the changes, the things that we need to do, the execution has to be better; the coaching has to be better. We just have to do a better job. Obviously, we did not play well last night and we played a pretty good football team. But I'm not going to harp on that to you guys. I'm going to focus on St. Louis." (Mike Singletary, 12/17/10)

On whether the coaching staff has done a good job of making adjustments at halftime:

"I think there are times that we've done better than others. So, I think it's different in every game. Sometimes you go in at halftime and you make changes and you come out in the second half and they don't work they way you'd like them too (Mike Singletary, 12/17/10)

Really? What should I Say about this performance? Maybe that should be a poll in of itself. I am assuming the site decorum is on for this post, so I am going to have to limit my words. At this point, watching this game a second time, proper English seems to have failed me. Watching most of this game a second time makes me want to shove a pencil in my thigh, just to see if I feel anything!! On a serious note, at least the 49ers made it to San Diego safely!

Justin Smith got kicked out of the game on a phantom unnecessary roughness penalty against the referee, and it was all downhill from there. Well, even before that. I think the bad started when the 49ers actually put on their uniforms and planned to take the field. San Francisco went 2/12 on 3rd downs, averaged 3.8 yards per play, andAlex Smith was sacked a stunning 6 times; Smith was also hit another 7 times and hurried a total of 16 times (by my estimates). Dashon Goldson and Nate Clements combined for a total of 17 tackles, not a good sign. The coaching was horrible and no adjustments were made at the half. Additionally, the 49ers appeared to give up on the game following the holding penalty on Moran Norris that reversed a Ted Ginn TD.

The San Diego Charger cheerleaders had a real good routine going during the half and on TV commercials; at least that is what I heard. Anthony Dixon did average 5.5 yards per rush, the problem is he only touched the ball six times. Does that make a whole lot of sense? Oh, Josh Morgan did have over 100 yards receiving, and I don't believe Michael Crabtree dropped a pass; although he only had it thrown his way four times. I do have to give some props to Patrick Willis and Takeo Spikes for playing through pain with a lot of passion.

Vincent Jackon's opening drive TD catch from Phillip Rivers; horrible coverage by the 49er secondary, but great catch by Jackson. I still do believe that the ejection of Justin Smith also played a major role in the loss; at least, the 49ers psyche.

I do apologize for the sarcasm on this post, I honestly do not see another way to get through it. Our 49ers couldn't have played a worse game, it was just pathetic. By pathetic I mean, undercooked, day old spam on a humid Mississippi summer; it truly was that bad. From my count Patrick Willis, Takeo Spikes and Ted Ginn Jr were the only players to show up for the 49ers. On that note, Alex Smithjust didn't have a chance in this game. His receivers could not get open, and when they did he didn't have the pass protection to get rid of the ball. Seriously, not a single person should place this loss on him.