As the 2011 NFL Draft approaches in eight days, the final touches are put on scouting reports through the use of NFL hosted local Pro Days. In a nutshell, the 49ers have invited 50 players who played collegiately or graduated high school in the area. They'll get the opportunity to take part in drills and meet with the coaching staff over the course of the day. The media will be allowed to start watching the practices at 2pm pacific. I won't be in attendance but I believe Sam Lam will be there, so make sure and check out his twitter account for updates, as well as those of Matt Barrows, Matt Maiocco and Eric Branch.

There is a sizable contingent of quality players taking part, although not all of them will be running drills. I have to think a guy like Cameron Jordan would be there to meet with the coaches and not a whole lot else. I could be wrong, but that's my guess at this point.

For now, I've posted a list of all the players attending the Pro Day. I'd say go ahead and use this as an open thread for discussion of the players and whatever we hear via Twitter. 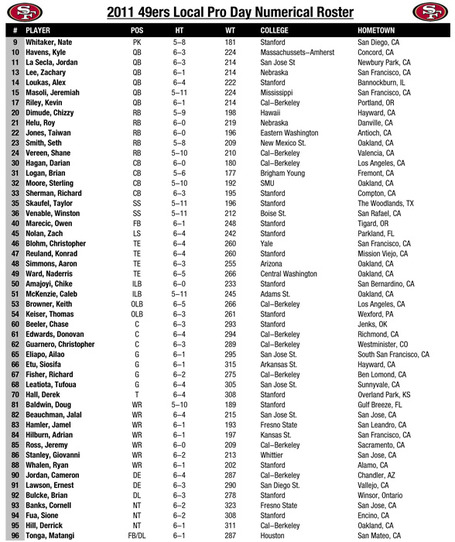