Share All sharing options for: 2011 NFL Draft: The Sanchez-Flacco Myth of QB Performance

AUTHOR'S NOTE: This is Part 4 of a 5-part series on predicting the career performance of NFL QBs. Sorry about the delay, but had unexpected family obligations come up yesterday. I'll be posting Part 5 of Monday at 8 a.m. PDT.

I'm going to make a prediction. No, not one related to QBs - not yet at least. Rather, I'm going to predict that, if you haven't heard it already, some pundit on some network at some date and time between now and the 2011 NFL draft, will say about some QB, "If this guy is going to be a starter from Day 1, then the ideal situation is for him to get picked by a team with a good defense and running game. That early in his career, you're not going to want to try to win games with him passing the ball 30 times a game." Mark my words, you're going to hear it.

I'm pretty confident about that prediction because I've been hearing it for what seems like my entire adult life, and the cacophony has only gotten louder since highly-drafted QBs Mark Sanchez and Joe Flacco have thrived on teams with - wait for it - good defenses and running games. In this penultimate post of my series, I'm going to try to see whether there's any truth to this worn out draftnik cliché. So, today's question is, "Do highly drafted QBs who start during their first season have better careers if they're drafted to teams with better defenses and better running games?"*

After the jump, some mythbusting...

THE BASICS OF THE ANALYSIS

This was a pretty straightforward situation. First, again thanks to my Lewin Forecast data set, I identified a group of 30 QBs drafted from 1993-2006 who became the full-time starter for their team during their rookie season. I should note that there were actually 33 highly drafted QBs in my sample who started during their rookie year, but Kerry Collins, Tim Couch, and David Carr were all drafted by expansion teams, for which there were no previous-year DVOAs. Anyway, next, I calculated correlations between these QB's FFPts/G and a couple of team-related stats:

So, the object is simple. To confirm the myth, we want to find statistically significant correlations. If we don't find them, it doesn't necessarily bust the myth. It just means that draftniks have, as of right now, no factual basis in repeating it over...and over...and over again.

Before I get to the results, let me just point out that, with 53 QBs actually being taken in the first 2 rounds over those 14 drafts, the fact that 33 started in their first season means the recent NFL has had a "throw them in the fire" rate of 62.3%. If we loosen up our "throw them in the fire" definition, there were 7 more QBs that became the full-time starter in Week 1 of their 2nd season. Now, of the remaining 13 QBs in my sample, 4 never became the full-time starter for their team. Taking these all together, we find that less than 1 in 5 highly drafted QBs have the luxury of watching from the sidelines while they get up to speed with the NFL game. This fact alone makes it kind of ridiculous for people to constantly talk about highly drafted QBs waiting for a couple of years before they become the starter. In the NFL, this just doesn't happen that often. Either a team's really bad, and is forced to start the QB (See 2005 San Francisco 49ers), or the QB proves himself worthy of the starting job very quickly.

In Part 3, I mentioned previous-year Defense DVOA as a new variable I was looking at. The astute reader probably noticed that I didn't mention it in the list of variables that had significant correlations. And the non-brain-dead reader now realizes what the graph below is going to show (click to enlarge): 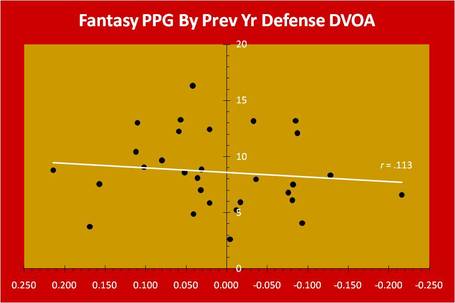 Check out that scintillating correlation coefficient! For those of you keeping track at home, that correlation translates to the following statement: About 99% of the career performance of highly drafted QBs has nothing to do with how good their new team's defense was the previous season. First half of the justification for pundit cliché down the tubes.

Let's see if things are much different for the QB's inherited run offense (click to enlarge): 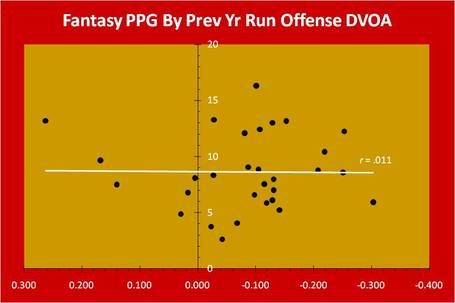 Even worse! This correlation basically says that, as was the case with the Wonderlic, a highly drafted QB's career performance has nothing whatsoever to do with how good their new team's run offense was the previous season.

So, I think that pretty much sums it up. Once again, I've discovered that NFL draft pundits are basically living in an alternate reality. But, of course, you didn't need me to tell you that. I'll leave any discussion points you might have to the comments section. See you Monday for the rockets-red-glaring grand finale.