Share All sharing options for: NFL Draft 2011, Day One: Finally...Answers 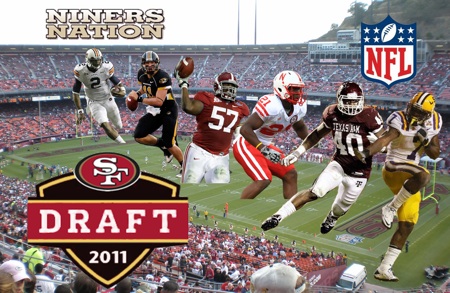 After months of nothing more than draft discussion and labor dispute nonsense, for a few nights we can forget about all the chatter and forget about the legal matters. The lack of things like free agency and trading has turned the Draft into the proverbial oasis in the middle of the desert. However, rather than discuss the labor nonsense and everything else going on, let's just enjoy the NFL Draft for a few days. It will give us plenty to discuss in the coming weeks, and that's really all we're asking for right now.

For the first three months of the 49ers offseason, discussions about the seventh overall pick were focusing in on the cornerback position. Patrick Peterson and Prince Amukamara are generally considered the top two guys, with a clear distinction between those two and the next level of corners. However, in April we've seen the chatter about potential quarterbacks heat up for the 49ers as well as the rest of the NFL. Suddenly everybody wants a quarterback, and when you have a limited supply, the value rises in an unnatural way. Maybe these guys really are worth first and second round picks, but it amazes me that a QB can go from being a fourth round pick in January to being a first round pick in April.

As you should come to expect, we'll be here all day long today, tomorrow, and Saturday with live draft results as the 49ers make their various picks. I've been working with the rest of the front page crew to come up with some awesome coverage this year. The general plan is as follows with each representing a new post:

1. Start with this open thread
2. New post if comments fill up quickly here
3. New post when 49ers make their first pick with a quick rundown of the player
4. Tre9er will provide more in-depth analysis of the pick
5. nocal81(Vincent) will provide a look ahead to the 49ers next pick with some predictions and thoughts.

We'll have posts after the draft as well, but this is the basic path we'll follow over the next few days. It keeps things a little bit organized and provides you all with plenty of content to read, disseminate and discuss. As we get through day one, I'm also open to suggestions for in-draft updates you might like. And of course, if the 49ers make trades or any other news/rumors come out, we'll have new threads for that as needed. We're flexible, but with some semblance of a plan!

IMPORTANT REMINDER: Two things: 1) NO GIFs. It slows things down and we're going to have some busy threads, so please do not post them. Also, please avoid posting too many pictures, as they can also slow things down; 2) Just a reminder that site decorum is OFF in the live draft threads. I don't want people cussing up a storm, but warnings will not be issued if you do feel the need to swear. However, just filling up a comment with nothing but swear words is going too far. Also, this does not mean you can attack other users. You can criticize their opinions, but you still have to be respectful of their opinions. However, mocking Mel Kiper and Todd McShay is allowed as warranted.

The first round of the 2011 NFL Draft starts at 8 p.m. (ET) on Thursday, April 28thand SB Nation has everything you need to prepare for it - NFL mock drafts draft projections, scouting reports, the full NFL draft schedule and more. Check it all out at SB Nation's NFLHub and our NFL Draft blog Mocking the Draft. Lastly, for more San Francisco 49ers coverage, check out our team blog: Niners Nation.