So the Niners reached - um, I mean went - for Missouri's Aldon Smith with their first-round pick. The obvious question now is, "Well, how good is he going to be?" Those of you who have been on NN for a while will already be aware of the fact that, outside of Miami and Gainesville, I'm not much of a follower of college football. We've got plenty of writers who are much more qualified than I am to give you subjective predictions about what Smith's 49er career will probably look like. No, I'm of course here to spit out the predictions based on stats.

Thankfully, Football Outsiders (FO) puts out sack projections for draft picks who'll be playing the NFL's pass-rushing positions (i.e., 4-3 DE or 3-4 OLB), so I think their projection for Smith is as good an indicator as any to rely on. If you're unfamiliar with FO's projection system (called "SackSEER"), Fooch did an informative introductory post a couple of weeks ago. For our purposes, though, just know that the result of SackSEER is a prediction for the number of sacks a pass-rusher is going to have by the 5th year of their career.

In addition to giving us the prediction, SackSEER's creator, Nathan Forster, is kind enough to add a little summary blurb about the player. Here's what he had to say about the newest Niner:

Smith is certainly an odd prospect. After accomplishing the unprecedented feat of recording 11.5 sacks as a freshman, Smith declined as a sophomore, recording only 5.5 sacks during an injury-plagued season. Smith's production on the whole is good -- few prospects record 17 sacks in their first two years of college. However, add in a below average Combine performance, and SackSEER feels that Smith is a slightly below average project relative to his projected draft position.

There is an additional red flag for which SackSEER does not (at least not yet) account -- the short but infamous history of redshirt sophomore edge rushers selected in the Draft. There have been only two redshirt sophomore edge rushers selected in the Draft since at least 1999: Aaron Maybin and Paul Kruger, both in 2009. Maybin and Kruger have given their teams almost no production -- they have exactly one regular season sack between them -- and both dramatically underperformed their SackSEER projections. Of course, the sample size here is too small to tell if this is a legitimate trend or the happenstance of two disappointing players who share the distinction of entering the draft uncommonly early, but it is enough to give pause before spending a high pick on a player with inconsistent production and below average agility scores...

After the jump, I'll translate some of that, and give you a competing prediction based on a system far less thorough than SackSEER...

When Forster mentions Smith's "below average Combine performance," he's referencing the fact that Smith wasn't all that impressive in the 2 Combine drills that are good predictors of pass-rushing performance: vertical jump and short shuttle time. If, like my 12-hours-ago self, you have no clue what the "short shuttle" is, here's a handy link. Apparently, the short shuttle is designed to measure the efficiency of lateral movement and change of direction. This seems like a skill that's important for pass-rushing, as is, for that matter, the lower-body ballistic power being measured by the vertical jump. So, what Forster's saying here is that Smith's below average in 2 important athletic skills related to the pass rush, and that's likely to make his career a less prolific one sack-wise compared to, let's say, (Johann) Von Miller, who jumped 3 inches higher and ran the short shuttle drill almost a half-a-second faster. Given that these seem to make sense as measurements of actual physical skills required to be an effective NFL pass-rusher, I don't see any reason to doubt the negative implications of Smith's underwhelming Combine performance.

Now, the second part of Forster's blurb can be pretty much ignored, given that even he admits the "redshirt sophomore bust" phenomenon is based on an incredibly small sample size.

So, SackSEER projects 20 sacks by Smith's 5th year. Depending on your level of optimism, you'll either think that's woefully low production from a highly drafted pass-rusher, or you'll notice that it's better than what Manny Lawson, the 49ers' last high pass-rushing draft pick, has done during the first 5 years of his career (only 14.5 sacks). Of course, we do have to remember that Lawson missed nearly all of the 2007 season, so perhaps he's a descent benchmark after all.

Just for fun, I went back and borrowed from my "Logarithmic Decay" post last year, and tried to apply it to the specific case of pass rushers. I'm not going to rehash the methods I used in that post, so feel free to read it if you're interested. The bottom line is that, if you know the player's pick number, you can reliably predict the approximate value (AV) of his career by taking advantage of the fact that the NFL draft is a real-life example of logarithmic decay, and that there's an equation associated with logarithmic decay which relates pick number to AV.

Here's the graph for pass rushers: 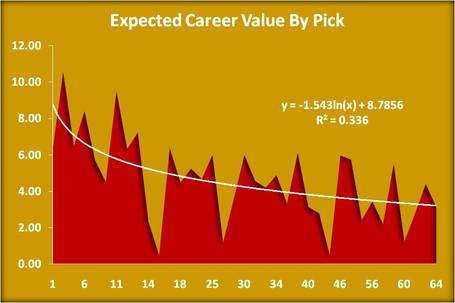 That logarithmic decay equation explains 33.6% of the variation in pass rushing careers, which compares favorably to SackSEER's 42% even though it's an incredibly ignorant prediction model given that the only thing it "knows" is a player's pick number. If we plug 7 into that equation, we get a predicted AV per season of 5.78 for Smith. Interestingly enough, that's almost identical to Manny Lawson's career value so far (6.00).

So, according to SackSEER, Smith's 5-year sack total will be just like Lawson's. According to my incredibly crude prediction model, Smith's career will be about as valuable as Lawson's. Pretty similar take there, I think. However, the question becomes, "Would you be satisfied if Aldon Smith's Niner career turned out like Manny Lawson's?"