On Colin Kaepernick's Letter to Himself

Colin Kaepernick wrote a letter to himself in fourth grade, in which he proclaimed he would play for the San Francisco 49ers. We take a look at it.

Share All sharing options for: On Colin Kaepernick's Letter to Himself

As many of us are now perfectly aware, Colin Kaepernick wrote a letter to himself as part of a classroom activity when he 11 years old stating his desire to, one day in the future, become a 49er. Now, of course, that childhood dream is all but fulfilled. And I have to admit to, looking on his letter, reading the words from his childhood, having a moment when I felt profoundly connected to his experience. His words, if you do not recall:

I’m 5 ft 2 inches 91 pounds. Good athelet. I think in 7 years I will be between 6 ft — to 6 ft 4 inches 140 pounds. I hope I go to a good college in football Then go to the pros and play on the niners or the packers even if they aren’t good in seven years. My friend are Jason, Kyler, Leo, Spencer, Mark and Jacob

There's something supremely touching about childhood dreams, about remembering the sports teams and players that we idolized in our youth. Perhaps you were the kid with the Joe Montana poster. Maybe you were the kid whose dreams came true the day Joe Perry signed your football. Maybe you were the weirdo who wrote a letter to Jeff Brohm because you thought that, one day, he could be a starter in the NFL.

Okay, maybe you weren't that last one. That last one was probably just me. But we'll get to that in a minute.

The point is that seeing Kaepernick's letter to himself, I was transported to my own childhood. The years, 1996 and 1997. My age, coincidentally, also 11. I became personally invested in getting in contact with any of my favorite football players. I had a book with team addresses listed. I had a list of my idols and a list of guys who I expected to become my idols, and I wrote them. Oh, did I ever write them.

I have now, on my shelf, a form letter from Jerry Rice and another from Steve Young. Generic though they are, I still cherish them. I also have, and these I cherish even more, three letters that never got sent. One to Terrell Owens, one to Jeff Brohm, and one to John Elway. They are, to put it bluntly, masterpieces of the genre. And we'll get to them after the jump.

But before you hit the jump, let me explain what I hope you can do in this thread. As a child, Colin Kaepernick dreamed of being on the 49ers. Steve Young was probably his idol. He was probably the only kid at his school who knew what "Bar None" means to the best of us. So I hope that you can think back to your own youth, think of the letters you sent, or the ones you never did, the Sunday mornings when you woke up five hours before a 10 a.m. kickoff because you were just too excited to watch the game, the superstars you adored and the eventual busts who you loved twice as much for half as long, and just, please, tell your story.

My story can only be told with pictures. I'll warn you: Try not to drink any milk, as it may shoot out your nose.

This was the first of the three letters that I still have. This was back when Owens was still just a pup in the league, and he looked every bit the star he was about to become without all those hairy warning signs. 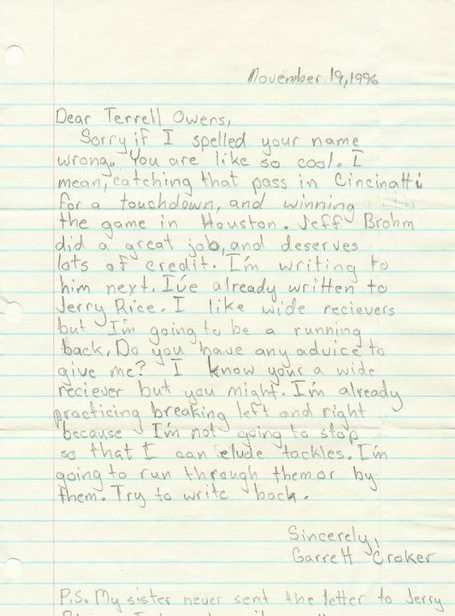 Owens was to give me the advice that would turn me into a star running back. His insight was my potential reward. A small kid (tall for my age, back then, but still quite small in volume), perhaps I just wanted somebody to validate the possibility that football was not a dream that would have to be shed. Years later, I would harbor similar dreams about baseball, and then still later about soccer. They never came to be, and that doesn't make me sad. They were energetic dreams, powerful dreams, and I remember them only with fondness. That same energy and power is what, today, I channel into the dreams I hold for my most current future. But back then, I saw Terrell Owens as a guy who might be able to help me out on my journey.

And he wasn't the only one. 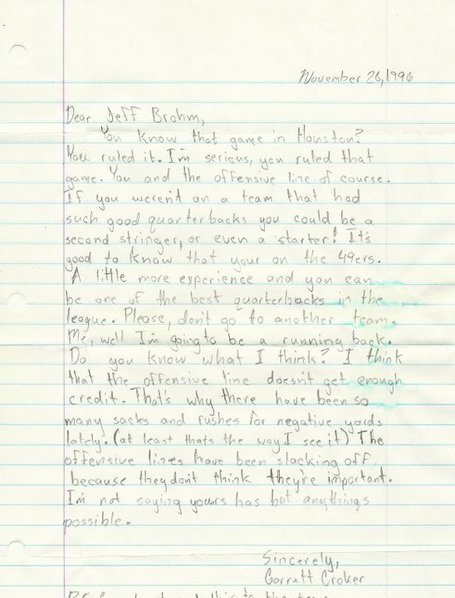 Yes, only a week later I wrote Jeff Brohm. And I wrote him with much the same intent. Jeff Brohm... I remember he threw for a boatload of yards one preseason, and my preadolescent fanatic was hooked. I loved the guy. And, of course, it was important that I let him know I was going to be a running back.

And for those of you interested, the P.S. on this one says "Go ahead, show this to the team." A precocious child, as it turns out.

And then I wrote the one that is going to get me yelled at. You have to understand, I was 11 years old. I was a fool. I had never seen Montana play except for the Chiefs. I had no perspective on Steve Young. I had no perspective on anything - and if you don't believe me, just remember that I wrote a letter to Jeff Brohm, of all people. So with that disclaimer, here's my third and final letter: 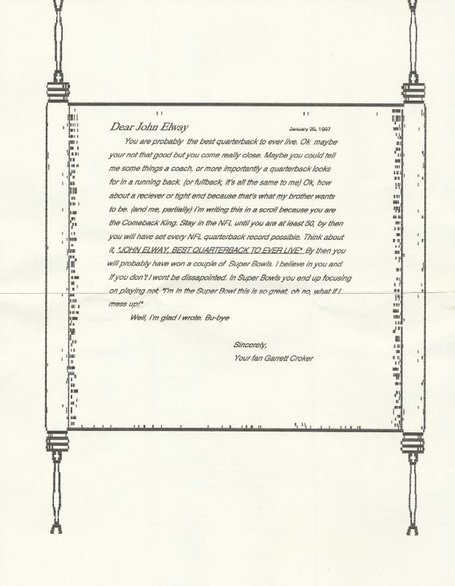 So there you have it, a snapshot of my boyhood dreams. My boyhood idols. The letters that I wrote in earnest as a young fan of the team and the sport.

So now, show me what you got. It doesn't have to be letters. It could be photos. It could be stories. Just, take that trip back to the days before you were a teen and remember what the 49ers, what the NFL, what those players meant to you. And share it.