Hey everyone. Today's my super-busy day at work, so I'm going to make this post as short and sweet as humanly possible. Yesterday, in Part 3, I focused on Rounds 1 and 2 of the 2006 NFL draft. Today, I'll be focusing on Rounds 3-7. If you have no clue what my draft evaluation stats, value above expectation (VAE) and return on investment (ROI), mean, see Part 1 and Part 2. For today's post, let's throw in my definition of a "diamond in the rough":

An NFL draft diamond in the rough is a player who was selected after the 2nd round and played 100% or more above the expected performance of his specific pick number.

In other words, a diamond in the rough (DIR) is a lower pick whose ROI stat is greater than or equal to 100.0%. I'm going to use this definition at the end of the post to present how many DIRs each team drafted, as well as to list the 2006 draft picks who can objectively be considered DIRs to this point. Onward, ho! 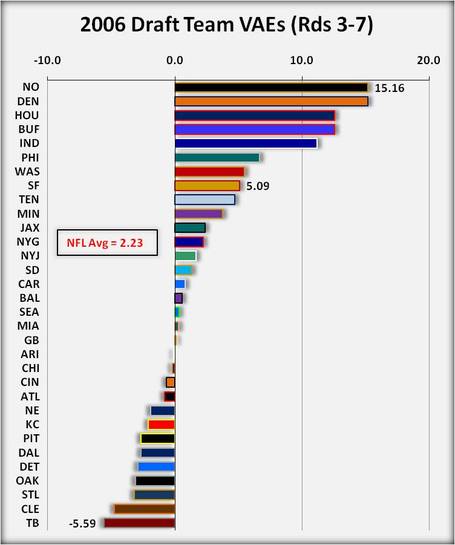 After the jump, I'll discuss the chart, present and discuss Team ROIs, and list the diamonds in the rough...

There were 2 teams, the Saints and Broncos, who were head and shoulders above the rest of the league in the later rounds. NO's high VAE was thanks to Jahri Evans (VAE = 8.82 AV/Yr) and Marques Colston (VAE = 8.11 AV/Yr), but more on them later. I'll also hold off on talking about the players behind DEN's high VAE, Brandon Marshaell (VAE = 6.16 AV/Yr) and Elvis Dumervil (VAE = 5.42 AV/Yr), among others.

At the bottom of the VAE rankings were 5 teams who we all pretty much consider the worst of the worst in the late-2000s NFL. I'm not going to beat the Rams' dead horse, but suffice it to say that it sure looks like atypically negative value in the later rounds might have had something to do with these 5 teams being so neatly ordered at the bottom of the NFL standings. Of course, these 5 teams did pretty badly in Rounds 1 & 2 as well, so maybe it's just overall organization-wide failure that was the problem.

Speaking of comparisons with VAEs for top picks, there were a couple of teams that reversed their fortunes - for the better - after Round 2. Specifically, the Dolphins and Bills, who were my whipping posts yesterday, ended up doing much better value-wise in the later rounds. BUF, in particular, did an about face that would make Drill Sergeant Hartman proud; going from 31st in VAE for the first 2 rounds all the way up to 4th in Rounds 3-7.

Another thing I noticed, which I haven't touched on at all this week, is that the Broncos, Texans, and Redskins have been consistently near the top of the rankings - an indicator of good drafting in 2006 - but all 3 have been mired in mediocrity over the past 5 seasons. Obviously, once Josh McDaniels blew up DEN's insane 2006 draft class, they were doomed. However, even when Jay Cutler and Brandon Marshall were still on the team, along with a healthy Elvis Dumervil, DEN still couldn't seem to break out of that 8-8 mold. Same goes for HOU and WAS (minus the Josh McDaniels part). What gives here?

As for the 49ers, we finally have them drafting well and drafting better than most of the rest of the league, including their NFC West foes. The Niners VAE for Rounds 3-7 in 2006 was mainly because of OLB Parys Haralson (VAE = 3.75 AV/Yr), who they got with the 140th pick, and another player who I'll name later.

Based on the chart, here are my VAE-based team grades for the first 2 rounds of the 2006 NFL Draft: 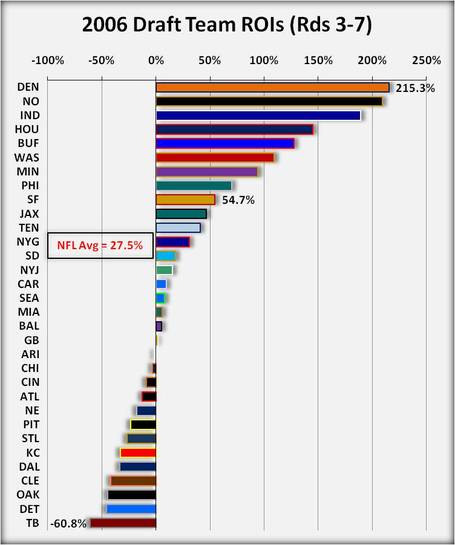 In terms of which team(s) got the most bang for their buck, the winner would have to be the Vikings, although the Jaguars are a close second. Armed with only 3 picks in the final 5 rounds of the 2006 draft, MIN was able to land a 4-year starter at DE, Ray Edwards (ROI = 269.1%). Similarly, of JAX's 4 picks in the last 5 rounds, 3 have yielded positive ROIs.

On the other side of the ledger, the Browns and Buccaneers, who both had 8 picks in Rounds 3-7, earned the least bang for their buck. Although it's mind-boggling to think about, both CLE and TB saw 5 of their 8 picks end up having essentially no career whatsoever. Also, remember that they were #31 and #32 in VAE. So, it's pretty clear that these 2 teams were the clear losers of Rounds 3-7 in 2006.

As far as the Niners go, we see that, like VAE, ROI also suggests they drafted well above average in the final 5 rounds. I'll be focusing on their 2006 draft class tomorrow, so won't get into much more detail here.

Based on the chart, here are my ROI-based team grades for Rounds 3-7 of the 2006 NFL Draft:

To remind everyone of what I said in the opening, diamonds in the rough (DIRs) are picks in the Rounds 3-7 who have an ROI of 100.0% or better. In contrast to the (at max) draft bust total of 6 that I talked about yesterday, the 2006 NFL draft produced 39 DIRs in 191 picks (at least according to my definition). That works out to a league-wide DIR percentage of about 20%, which doubles the bust percentage.

Here's a table showing how each team did in terms of the number of DIRs they chose in Rounds 3-7 of the 2006 draft (sorted by DIR percentage):

And here are the best 10 picks of the Rounds 3-7 according to ROI:

So, would it be an understatement to say that Colston was a good pick? To put his ROI in perspective, Tom Brady, the very definition of "diamond in the rough" over the past 10 years - if not all-time - has an ROI to date of 965.7%. To hone in on Colston's DIR-ness even further, consider that he was taken only 3 picks ahead of Mr. Irrelevant, whoever that was. Mr. Irrelevant is generally the sad sack who we know is going nowhere. Colston, 3 picks away from being Mr. Irrelevant himself, has been a prolific #1 WR on a Super Bowl Champion. Go figure.

Of course, the Saints weren't the only team to have 2 of the Top 10 DIRs in the 2006 draft. First, there was the aforementioned Broncos, who selected 2 future Pro-Bowlers 7 picks apart in the 4th round. Second, we have the Colts, who got a multi-year starter at T and a multiple Pro-Bowl DB 8 picks apart in the 6th round. With respect to IND, it should be pointed out that it's pretty much common knowledge that Bill Polian's entire draft strategy has the acronym "DIR." According to ROI, the 2006 NFL Draft bore that out.

Oh, and about that Niner up there, discuss!