2011 NFL Draft: Michael Person Projections, Putting It All Together

Share All sharing options for: 2011 NFL Draft: Michael Person Projections, Putting It All Together

No one really thought that the San Francisco 49ers would have gone with two offensive linemen in 2011, especially after they spent their two 1st round picks in 2010 on that unit. Additionally, many of us were surprised with the fact that they went with a relatively unknown, Michael Person, with that selection. After all, he only played at a FCS level school, Montana State.

I will not pretend to know much about Person's skill set, because up until a couple weeks ago I had never even heard of the guy. In fact, last week was the first time I saw any tape on him.

Scouting reports from a Montana State offensive linemen seem hard to come by, however, I was able to find a couple. After the jump, I am going to look at these scouting report, analyze them for their contents, and give you my limited opinion on Person. Additionally, I will surmise that the 49ers actually had better options with that selection.

Person is prospect from the FCS ranks with the intangibles, work-ethic and football smarts to become a backup offensive lineman. However, lacks the foot quickness and body control necessary to start or protect the blind side. While he did not allow a sack during his senior year and shows the ability to thwart the bull rush, should have problems dealing with speed rushers.

Doesn't play with great pad level or blow defenders off the ball but does a good job getting into position as a run blocker. Consistently recognized for his leadership and effort in college. Person could hear his named called late on Day 3

When it is concluded in a scouting report that a player has the intangibles, work-ethic and "football smarts" to become a backup offensive lineman; I have to wonder whether or not the 49ers saw something different in him. Reality tells us that you don't spend ANY draft pick on a player whose ceiling is a back up in the NFL. This with the possible exception of quarterback.

Despite the fact that Person did not allow a sack his seniors season, NFL.COM decided to focus on the fact that he has issues with speed rushers. Well, the 49ers plan to move him inside, so that shouldn't be as big of an issue as it was when Person played tackle in college. On that note, I question any report that says he has problems with something, while in the same sentence noting that he didn't allow a sack. Accordingly, Person allowed one QB pressure in 2010. If he had problems with speed rushers, I think that number (singular) would have been much higher.

One of the most inspirational players on the Bobcat football team, Person has quietly developed into a legitimate presence at tackle. While he still needs work to get stronger, his body of work this postseason could result in late round draft status

Well, this report really doesn't say much, does it? "Need to get stronger", I think that could be said for most offensive linemen coming out of college, especially FCS college prospects. Additionally, Person was extremely solid in his post-season work outs, so that could have catapulted him into consideration for the 49ers, and other teams, in the 7th round. Baltimore and Seattle were also both considering Person. 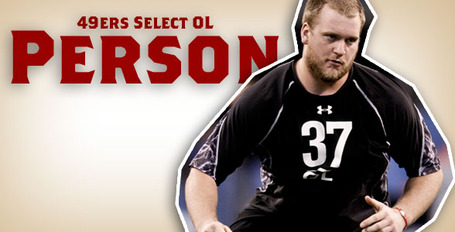 Person is the first Bobcat taken in the NFL draft since cornerback Joey Thomas in 2004. Thomas was selected in the 3rd round by the Green Bay Packers.

Scouting report: Person has the work-ethic and football smarts to compete for a backup spot. He does not have the quickness and body control to play tackle in the NFL, so he's best-suited at guard.

How he fits with 49ers: The 49ers expect him to move inside to guard, where he will compete for a roster spot and be a developmental player. The 49ers, Ravens, Seahawks and Jaguars showed the most interest in him.

The most extensive scouting report that I could find on Person. Considering that Montana State led the Big Sky in pretty much every offensive category, it is extremely impressive that he anchored that offensive line. Once again, we hear the word "work ethic", without comparing names etc... I heard this a lot about Mike Iupati last season. Of course, these two players have different skill sets; but, that is an interesting aspect of Person's scouting reports.

Synopsis: There were other players available to the 49ers in the 7th round that would have made more of an impact at need positions and represented better value than Person. Below is a lost of those players

Now there is no question that I am more familiar with these three players listed above. But, all of them had solid college careers against high level competition. Stanley Havili probably wouldn't have been the best pick for the 49ers at the full back position. He plays that role in more of a fluid way and isn't what you would call a "hard knocker". That said, I would have rather of had both Malcolm Smith and Jeremy Beal with this selection; Beal especially. He had a horrible post-season set of workouts and that saw his draft stock fall rapidly. Before the 2010 season, Beal was considered a 1st or 2nd round pick. So, there has to be some talent there.

With all of my criticism of other scouting reports and the 49ers selection of Person in the 7th round, I have to finish with this; Michael Person played at such a high level at Montana State that multiple teams were interested in him. There has to be something to the fact that he was so successful there. I really don't care what level you play, if you are good you are good!

As noted above, Person is going to be a project player, but with Tony Wragge, Alex Boone, Daniel Kilgore and possibly Barry Sims as back ups; the 49ers can afford to have him sit in the bench.

My father always told me "you never know a good women until she slaps you across the face". While, in retrospect, that doesn't seem like good advice; I believe the comparison works here to some extent. We all questioned and still do question the selection of Michael Person, but only time will tell and once he slaps an opposing defensive linemen across the face, then we will now that it was the right selection. Until then, it is going to be a waiting game.