Ronald Johnson: Have You Seen My Football?

Share All sharing options for: Ronald Johnson: Have You Seen My Football? 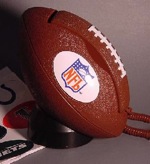 Bonus points are in order for Eric Branch coming up with the best, most bizarre story angle of the 49ers offseason. He has an entertaining article about new 49ers wide receiver Ronald Johnson and his "relationship" with the football. I don't mean the football like Bobby Boucher's mother described it as "the foosball." I mean the actual physical football used during games.

Johnson does more than eat, sleep and breathe football. He actually sleeps with his football.

I guess that's not entirely the end of the world. In fact, it sort of reminds me of Darnell Jefferson from The Program when he would carry the ball everywhere and have to avoid other players attempting to strip it away. Sleeping with a football is probably going to the next level, but I can't imagine he's the only person in the world who sleeps with a piece of sporting equipment.

Apparenty however, Johnson has actually written the word son on the football he now carries around with him:

"It sounds strange, but I have relationship with the football," Johnson said. "... I actually sleep with it. It sounds weird, but I do it. Just to get that extra edge everyone else doesn't have."

It's certainly safe to guess why he got a gold star from Trent Baalke and Jim Harbaugh. Would anybody be surprised if he owned one of those old football telephones? I'm not here to judge Ronald because I do like the sign of commitment to the game. It will be interesting to see if that commitment translates into excellence on the field.