This is a feature I ran last offseason, and I've decided to bring it back. For now, it will be a weekly thing, and when football gets back on track (providing it actually does any time soon), then it'll run a little less frequently, I'd imagine. The idea is to simply talk about some of the other fine blogs on our network of 325+. The last time I posted one of these, we were sitting at 254 sports blogs, so we've seen some significant growth.

Most recently, (the term "recently" is being used loosely here, as it was May 29th, 2010 when the last post was made) I took a look at our NASCAR blog, NASCAR Ranting and Raving. About a week ago, I received an email from that site's editor, 4ever3, thanking me for the post. He acknowledged that he was about a year late on it, but the sentiments were well-received by myself either way.  So I've decided to bring them back.

Previously, I'd taken a look at Blog Huddle, the official blog about SB Nation. In that post, I linked the previous Saturday Swing posts, you can find it here - or you can simply click the section up top "SB Nation Blogs" to see all the previous posts I've done. Lastly, I recommend following the official @SBNation Twitter account, they link some great stuff on there, as the flagship site has grown quite a bit in regards to original content. 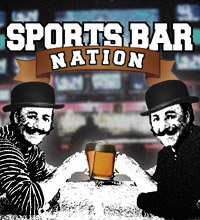 This is a blog that I loved the idea of when it was started, and I definitely still do. It's pretty criminal of me to not go there as often as I should, and as such, I've seen them slow down with their posting. However, I don't expect these guys to stop what they're doing anytime soon, I expect that to keep up and I expect them to eventually get back to something like a daily posting schedule. What is it that they're doing?

Honestly, I don't see how you can really get any better than that at this point. They talk about recipes and good brews, and when the NFL season gets going, I imagine we'll see a lot of talk about tailgates and the like. That's one reason you guys should be taking note right now, because I imagine I'll be spending quite a bit of time over there if they do get to posting during that point.

Right now, there's not much of a community, but that can and will change. It's true they've got a dirty Oakland Raiders fan making frequent posts right now, but he's alright by me. When I say "alright," I mean for five dollars I'll beat him with a pool cue until he gets detached retinas, but what are friends for anyway? At the very least, we can be bonded by how truly awful our teams have been these past few years.

Back on track, if you want some good man stuff, this is the site for you. When the NFL gets back on track, I know I'm going to be heading over there, as I may not actually be in a position to do much tailgating this season, I can at least take part in the discussion. Plus I love talking about beer ... like a lot. What you get here are a few guys who really enjoy the finer points of sporting fandom, mixed in with a legitimate talent for writing and a penchant for humor. I'm hoping that drunk columns become a mainstay the night of games during the season.