Yesterday evening I had the opportunity to take part in the 49ers Pasta Bowl V charity event. The dinner helps raise funds for the San Francisco 49ers Foundation in support of City Year San Jose/Silicon Valley and Fresh Lifelines for Youth. The team takes a unique angle with this event. 49ers VIPs including current and former players provide service as waiters and also join the guests for a pasta dinner.

After the jump I've posted some video I took of the event. I used a flip-cam to shoot the video and it has a sort of Blair Witch look to it. A little bouncy and you can't make out a lot of people, but it's also the first time I used the camera so hopefully you can forgive me.

There were 41 tables with two or three current or former 49ers working in the celebrity waiter capacity. I went through 15 or 20 of the tables and tried to get at least a little bit of footage. Feel free to check it out.

Before you get to that though, I've got a bit of an embarrassing story that might bring your fearless leader down a notch in your eyes...or maybe it'll raise me up, who knows.

I've been writing here at Niners Nation for four and a half years. What initially started as just something fun to do has taken on a life of its own and become so much more. Over the course of this time, I sometimes wonder if I'm getting too detached from my fandom. Not that I'm no longer a fan of the team, but that I'm somehow veering away from the basic fan passion and excitement that is at the root of all this.

And then I met Andy Lee last night and I realized the fandom is most definitely still there.

For those that are new to the site, some long time site members will be able to tell you that your fearless leader is a big Andy Lee fan. While I'm a fan of most everybody on the 49ers team, Andy Lee has always been a notch above. I've tried to figure out why, and I think I have an idea. Even when things have been at their lowest over the last seven years, Andy Lee has developed into consistently one of the best punters in the NFL. Maybe it's not the same as what every-down players do, but anybody that can proclaim themselves one of the best in the world at what they do has to be considered fairly impressive.

As I was walking around shooting the video I spotted Lee at his table. I made my way over and said hi and then proceeded to do my best Chris Farley impersonation. If I had said "Do you remember when you had the 82-yard punt against New England? That was awesome" it would have been complete. I actually dropped in a "you're my favorite player." As I was saying it I actually thought of the Chris Farley SNL skit.

It was just a little bit embarrassing, although I can laugh at it now as I can only imagine the thoughts going through his head. He has to realize he's a pretty awesome punter, but even still, how frequently does a punter get that kind of fan adoration? Hopefully it's not too bizarre for him.

It's events like this where I like to think I'm just as much a fan as I am a writer. At times I balance a fine line as I could arguably be classified as anything from a straight up blogger to some fan with a view to even more of a journalistic bent. Blogging sort of sways all around at times. Thankfully though I haven't lost the passion of a fan...even if it does lead to the occasional awkward interaction. 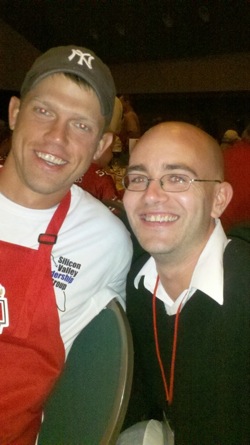