With last Friday providing us with our first look at the 2011 San Francisco 49ers, it's easy to see why I'd go back and re-watch a pre-season game.  Well, maybe I'm just a tad on the fanatical side to do so...perhaps even more so since I've re-watched it four times now.

Today I wanted to focus on the outside linebackers since I've been so encouraged by the play of guys like Ahmad Brooks and...who's that other guy?  The rookie?  You know, what's his name?  Oh yeah, Aldon Smith.

Truth-be-told I should have named this post "Aldon Smith Edition" because as I went back to look at impact plays by the OLB's, it was Smith's number that I constantly saw involved in the play.  For a rookie, the guy looked really, really good.

After the jump I'll give some instances where the play of an OLB stood out to me...mostly positive but there was one "coaching point" I'll bring-up as well.

1Q - 12:44 - Here we see the 49ers in Nickel (4 DL, 2LB, 5 DB) with Haralson at RDE and Brooks at LDE.  Brooks turns on the jets and pushes the edge, staying with Brees and making a nice tackle just as the throw was made, forcing an incompletion.  Text-book pass rush.

2Q - 6:36 - It looks like the defense is in a 4-3 at game-speed, but if you take a look at this shot they're actually just playing Smith up near the line of scrimmage.

Smith hardly pays any mind to the tackle trying to cut-block him low, shoving him down and staying poised to make a tackle on the inside run.

2Q - 3:59 - Here's the coaching point I referenced.  Smith recognizes the overload on his side, so he shifts out to play coverage (top defender in shot below).  The thing I wish he had done differently, or better, is to really jam the TE hard before letting him go and settling into his zone.  Smith made contact with his hands but didn't upset the route enough to let the safety concentrate on the middle of the field.  Still, he made a good read and didn't look like an elephant on roller-skates in coverage. 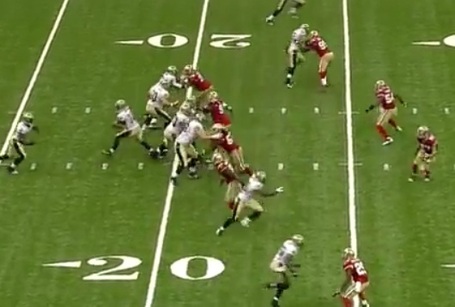 3Q - 15:00 - Here is another example of a rookie making a good decision in play diagnosis.  Smith doesn't bite on the inside run, instead keeping his contain and forcing the reverse back to the inside where Kristick can make the play.  Reverses are designed to break contain by fooling the end-defender and you'd think a rookie might just fall for this, but Smith does not. 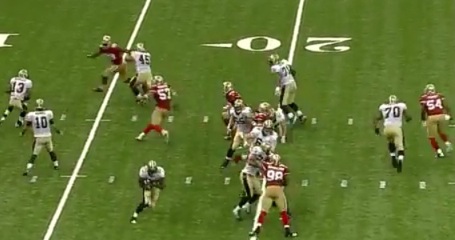 3Q - 12:02 - This play is just a motor play by Smith.  He get's tripped-up by the tackle and just keeps fighting, keeps coming and ends up getting part of the QB's lower-leg causing him to fall and fumble the ball.  The guy won't quit until the whistle and I absolutely love that.

Stay tuned for more game-film reviews as the pre-season and regular season goes on.  Also feel free to leave me some requests in terms of what you'd like me to focus on next time.