Share All sharing options for: 49ers-Raiders: Alex Smith, Braylon Edwards Connect On A Thing Of Beauty

This past Monday I put together a post breaking down Alex Smith's first pass of the 49ers-Saints game and described my frustration at what seemed like a fairly basic mistake. Although a single play is too small a sample size to take a whole lot away, I'm kind of liking the idea of breaking down some specific plays each week. Accordingly, I wanted to break down a play that will be on the highlight reels all week.

In the second quarter, the 49ers defense did a phenomenal job shutting down the Raiders offense inside the 49ers 5-yard line (we'll break down a play there as well). The 49ers offense took over at their own five following a Jason Campbell sack and began the long process of moving back down the field.

The 49ers offense continued its efficient work outside the red zone by advancing the ball 41 yards on five plays, setting up arguably the "prettiest" play of the day. On 1st and 10 from the 49ers 46 yard line, Alex Smith connected with Braylon Edwards on a 32 yard pass play that Edwards hauled in with just his left hand while diving. The catch will get all the publicity, but as I'll show you after the jump, the pass was perfectly thrown over cornerback Walter McFadden who couldn't have defended Edwards any better without getting called for pass interference.

As with the previous breakdown of a single play, it's only one play, but it's still nice to highlight specific performances beyond what the numbers show us.

Alex Smith sets up to pass 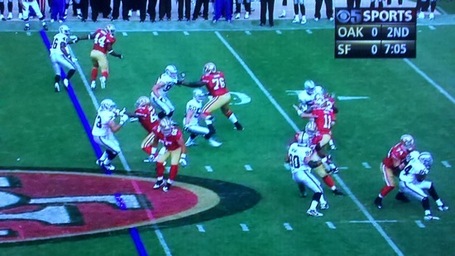 As this first screenshot shows, the offensive line and Kendall Hunter (behind Smith in this shot) all picked up their blitzers quite well. The one Raiders player you see untouched is #50 Travis Goethel (middle of the screen) who ran a bit of a delayed blitz after all the 49ers offensive linemen and backs were engaged. The key to getting the pass off was that Alex Smith did not hesitate in going to Braylon Edwards who seemed to be running a fairly basic go route.

The ball comes in just over the corner 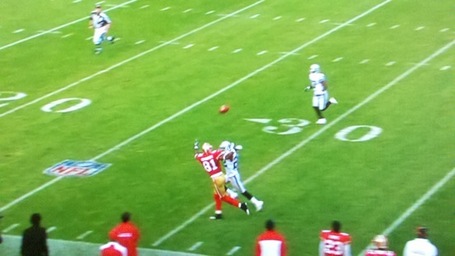 This second shot shows Walter McFadden playing what I would classify as excellent defense against Edwards. He made the necessary incidental contact that comes in just under pass interference and remained engaged with his receiver all the way to the catch. The pass is thrown just about perfectly so that it comes in just past the head of McFadden.

The other option would have been for more of a jump ball play and if the ball had been underthrown, maybe Edwards would have slowed and gone up for the two handed grab over McFadden. Whatever the case, McFadden really didn't see the ball coming and had little shot outside of grabbing Edwards and pulling him down. McFadden probably made the smart play in this case. If he drags him down the 49ers get the yardage. If he forces Edwards to make the tough play, maybe Edwards doesn't bring in the ball. This is a case of a corner appearing to do everything right but still losing the battle.

Braylon Edwards hauls in the pass 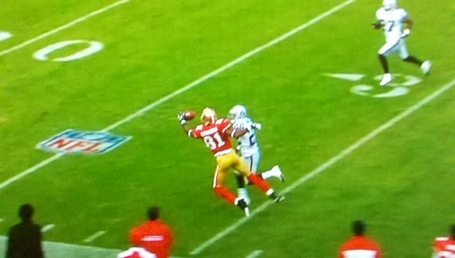 And then we see the ball hit Edwards hand, which he would then roll into his body and hold on to for the catch. One of the concerns about Edwards throughout his NFL career has been his hands. However, as our Jets blogger told us, Edwards worked hard last year to cut down on the drops, so maybe he's solidifying into the receiver he can be.

This is only one play and there is still a lot of preseason football left to be played. Nonetheless, it raises some exciting possibilities as we move forward into the season.