Early in the second quarter of the 49ers 17-3 victory over the Oakland Raiders, the 49ers defense engineered a huge goal line stand. After Alex Smith threw an interception setting up the Raiders at their own 37, Jason Campbell and Michael Bush led the Raiders down to a 1st and goal on the 49ers 2-yard line. The Raiders would be shut down on four straight plays, and the first play might have set the tone.

The Raiders lined up in a big formation and ran play-action followed by Campbell bootlegging to his left. Campbell looked to pass a couple times but eventually had to pull the ball in and run for it. Thankfully, all-world linebacker Patrick Willis made a bee-line for the quarterback and dropped him for a one yard loss. After the jump I've got some screen shots for folks to check out. 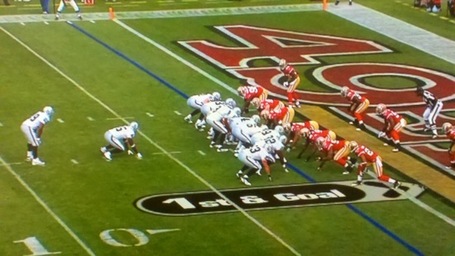 As you can see here, the Raiders are lined up in a goalline formation with a pair of tight ends on the side of the formation and Kevin Boss on the left side. The Raiders would run play action, faking the handoff to Bush, which drew in the defenders brieflt. 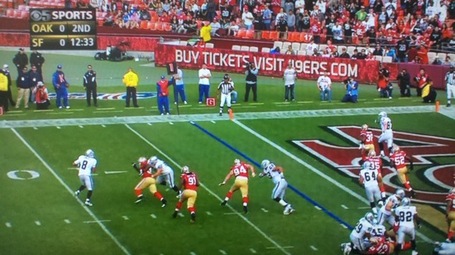 Campbell then rolled to his left and at the top of the screen you can see Kevin Boss going into the end zone trying to break Dashon Goldson's coverage. Boss had actually started with a quick block before releasing and running a corner pattern. For a brief second after Boss released from his block Goldson almost missed him. However, he quickly recovered to drop into coverage against Boss. He was a couple feet behind but Campbell wouldn't make the throw as I think he was concerned that Goldson could close fairly quickly.

Boss frees up as defenders collapse towards Campbell 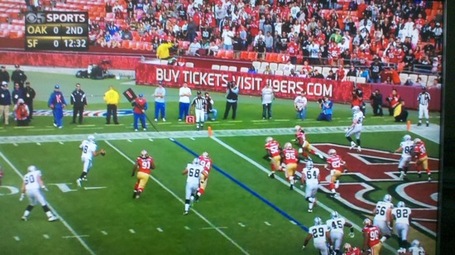 As Campbell kept rolling and not throwing, Goldson broke off his coverage of Boss and made a move in to go after Campbell. Just from this view, without knowing his role on this play, it seems like Goldson should have stayed on Boss. With Patrick Willis, Ricky Jean Francois and Ray McDonald all collapsing on Campbell, I don't know if there was really a need for Goldson to leave Boss fairly wide open. A nice little touch pass would have meant an easy six for the Raiders. Again, without knowing the play calling and assignments I'm only speculating, so take that for what it's worth. 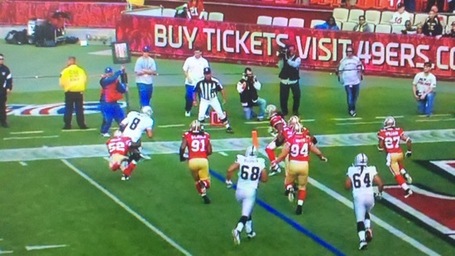 Thankfully, Bamm Bamm quickly pursued Campbell and dropped him for a one-yard loss. He must have seen the end zone and figured he could make the last three yards. While Campbell is a fairly athletic quarterback with solid speed, Patrick Willis is a force of nature that cannot be stopped. We've seen him rundown the likes of Adrian Peterson, Steven Jackson and Chris Johnson. A QB trying to turn the corner and make it to the end zone stands no chance.