Share All sharing options for: 49ers vs. Raiders: Analyzing the Run Game

I believe I am the last of the flurry of new front page writers on Niners Nation. I’ve been reading this site for years and finally registered an account about a year ago. My name is Derek Evans and I currently attend a community college in Sacramento, where I was the sports editor for the school newspaper last semester.

I was born into the 49ers fan base. My mom was a huge Joe Montana fan. Ever the rebel, I decided that Steve Young was my favorite 49er quarterback of all time (closely followed by Shaun Hill). This lead to many tense moments between my mother and I. I loved (and still love) to tell her that Steve Young is better.

I am very excited for the chance to write for my favorite blog, Niners Nation. I’d like to thank Fooch for the opportunity. For my first post I will be looking at the 49ers running game against the Oakland Raiders.

A lot has been made of the 49ers passing game as of late, and rightfully so. The 49ers passing attack has been woeful since Terrell Owens and Jeff Garcia left. Now the west coast offense is finally back in San Francisco. But Jim Harbaugh, like Mike Singletary (cue panic), relies on a physical running attack to wear out the opponent's defense.

The 49ers ran all over the Raiders on Saturday. They rushed 41 times and averaged close to six yards per carry. After the game, I went back and "took a look at the film." I focused on the blocking of the offensive line and the different formations the 49ers used. 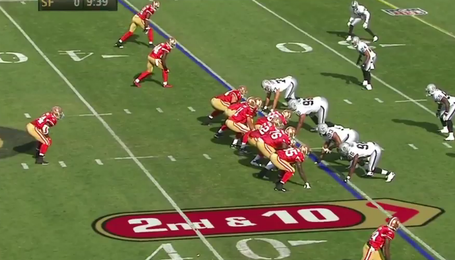 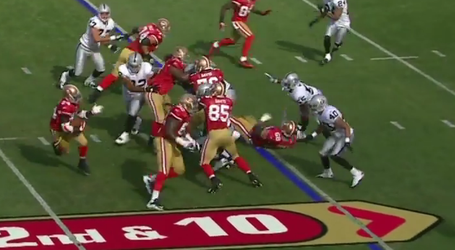 3 WR, 1 TE, 1 RB set. There was no pre-snap motion on this play. Here we see Chilo Rachal pulling to the right to be the lead blocker for Anthony Dixon and makes a good block down the field. Vernon Davis does a great job of setting the edge here and Dixon is able to get to the outside and gain 11 yards. 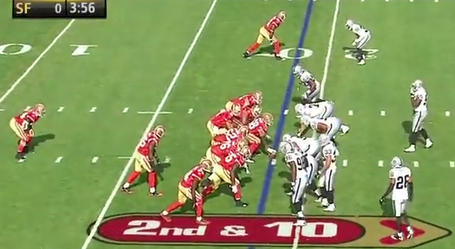 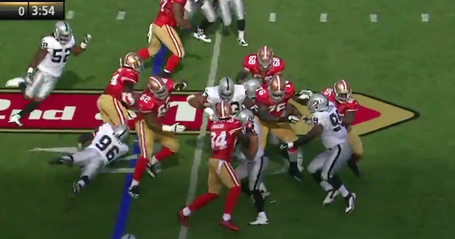 2 WR, 2 TE, 1 RB set. Again, the 49ers run to the outside, this time on a pitch left. Staley, Iupati, Rachal, a V. Davis handle the interior blocking while A. Davis, Morgan, and Delanie Walker are the lead blockers for Dixon. The Raiders over-pursue and leave a cutback lane for Dixon, who gains nine yards on the play. 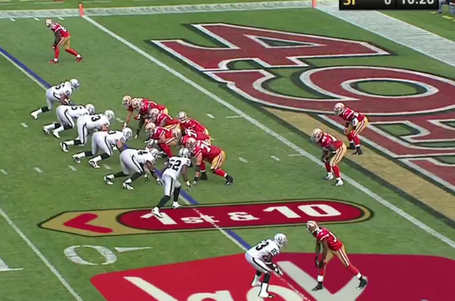 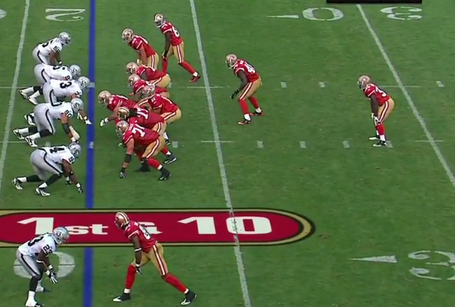 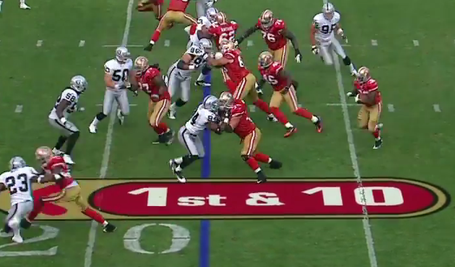 1 WR, 2 TE, 2 RB set. Delanie Walker starts out lined up in the backfield to the right of Kendall Hunter. The run is to the left, and Delanie comes around to lead block for Hunter. This is a nice example of the deception Harbaugh uses in the run game. There are two tight ends to the right. The fullback is lined up to the right, but they run left. Hunter had an impressive run for 16 yards on this play. 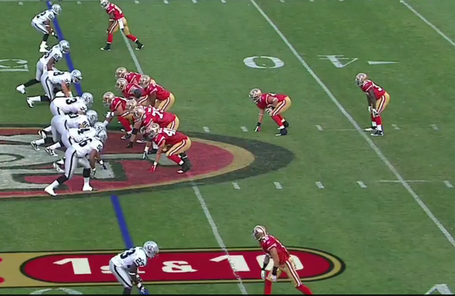 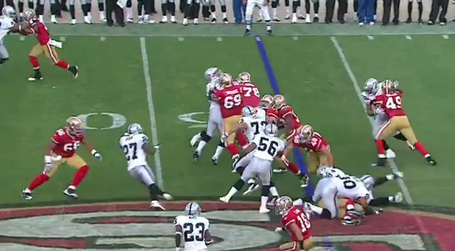 2 WR, 1 TE, 2 RB set. Tony Wragge and Alex Boone combined to eat up the Raiders' defensive end on this play. Daniel Kilgore also stood out, and he helped open up nice hole for Kendall Hunter to hit. Hunter's speed did the rest on this 53-yard touchdown run. The offensive line just abused the Raiders on this play.

The 49ers ran the ball 65% of the time. They also averaged almost six yards a carry, which is outstanding. I think it was a combination of the score (the final drive they ran every single play) and the fact that the Raiders just couldn’t stop them dictated how much they ran the ball.

One thing I did notice is that you can’t just watch Iupati and figure out where the ball is going. He wasn’t pulling nearly as much as he did last season. The offense had multiple lineman and tight ends pulling and blocking down-field.

Kendall Hunter looks GOOD. It’s early, and Glen Coffee tore the Raiders up as well, but I love his combination of strength and agility. He hits the hole quickly and doesn’t do a lot of dancing in the backfield. He also had a great play in pass protection when he completely flipped a guy over on a cut block. There were tears of joy coming from Tom Rathman on that play.

We already knew this, but Harbaugh loves tight ends. The majority of the time they had multiple tight end sets, with Delanie Walker and even Bruce Miller lining up or motioning into the backfield as well.

It will be key for Walker to keep improving as a blocker. It would really help the 49ers disguise the intentions of the offense and keep him on the field. Personally I would love to see a 2 WR (Edwards, Crabtree), 2 TE (V. Davis, Walker), 1 RB (Frank Gore) set a lot during the season. It gives them the most potent offense possible.

This was a very encourage sight for the run game. The Raiders front seven is probably the greatest strength of their team with Nmandi Asomugha leaving. Yes, both teams were running vanilla offenses and defenses, but you have to like the way the 49ers dominated the trenches from the first string to the third.