In the past couple weeks, the folks at Comcast/XFINITY got in touch with me about potentially doing an interview with Matt Maiocco. Comcast has been putting together a new campaign they're calling the XFINITY Couch. They started it out in Philadelphia at a Phillies game and decided to try it out here in the Bay Area. This past Saturday the couch was set up at the 49ers-Raiders game, and again the next day at the Oakland A's home game. The idea behind the couch is that it is the proverbial "best seat in the house." A few lucky fans are upgraded to the couch and get to enjoy the game from what some may call the best seat in the stadium.

As part of this campaign, they're working with SB Nation bloggers to interview local media personalities "on the couch." In Philadelphia, they interviewed CSN personality and former Phillies pitcher Ricky Bottalico. At the A's game on Sunday I believe they interviewed Ray Fosse. For the 49ers-Raiders game, I had the chance to chat with Matt Maiocco. I've posted the transcript after the jump, and you can even view some video of it (Hard to hear due to wind and music in the background).

The interview was a mix of PR and getting a little bit of substance out of it. The most interesting aspects I took away from it were his thoughts on sleepers and also his comments about Jim Harbaugh's decision to close practices to the media. The team was required to open practices early in camp, but at this point it sounds like they have the choice to close them, and they are electing to close them. Maiocco had some brief comments, although others in the Bay Area are a bit less than pleased about Harbaugh's decision (Kawakami, Cohn).

What do you think about Harbaugh closing practice to the media?

Fooch: Can you describe the path that has taken you to CSN Bay Area?

Maiocco: First off, how bout this couch? How about the Xfinity Couch?! What has gotten me to the point where I've got the best seat in the house? I started in journalism when I was in high school, but before that I loved it. I got a job while I was in school up at Humboldt State. I was working there. I got a job in the Bay Area and sort of worked my way up the food chain a little bit at the paper I was at covering preps and then actually when the Raiders moved back I'd been doing already a little bit of backup 49ers work. When the Raiders moved back in '95 it opened up a beat. I started covering the 49ers then in 1995 and I covered them for a couple years with the Oakland Tribune Group and then I went to the Contra Costa Times and then the Press Democrat at the time when the Internet started coming about. And then I came to Comcast Sportsnet Bay Area right after the draft in 2010. So I've been doing it for a while. And I don't look that old.

Fooch: There was plenty of talk when you went to CSN Bay Area. How does going to work at an online and video media company compare to your previous experiences. What are some of the advantages of that?

Maiocco: Well, in a lot of ways, I'd already started to make that transition because of at the Press Democrat the last few years I was there it really turned into more of an online job and I hate to say it but the newspaper almost became an after thought. And now I'm doing the same things I had been doing with the Press Democrat, but now instead of writing a newspaper story at the end of the day, I'll go and I'll talk on TV about it. Being on TV more has increased the number of times I've been recognized. There are times I'll go to a 49ers function and people will recognize who I am...it just happened on the way over here. From that standpoint I sort of have to make sure I'm on my best behavior when I'm out in public. It isn't always easy, but I try.

Fooch: I would imgine so. In spite of the eventual change in the media policy, up until now, having spent the last three or four weeks at 49ers training camp, are there any disadvantages when you're covering the team day-to-day that might affect your coverage at all?

What people don't realize I think is that especially here in the exhibition season, this is just one piece of the evaluating puzzle. Because most people don't see the team practice Monday, Tuesday, Wednesday, Thursday, Friday, they don't have any perspective. And so when they see the 4th string running back break off a 50-yard run, they go "That guy's good, why don't they get him on the field." But they don't see the other practices and with Jim Harbaugh's staff, more was put into the 11 practices before last Friday's game for instance, than what happened in New Orleans. Now, with the perspective that I'm going to have is watching the games just to see, ok, let's see how these guys are doing and not having that background of watching the guys in practice. It's going to leave myself, all reporters, and I think the fans at a disadvantage when it comes to trying to figure out who really are the best players on this team.

Fooch: Having watched the team for the last month, are there are any sleepers that have taken a step forward at this point? 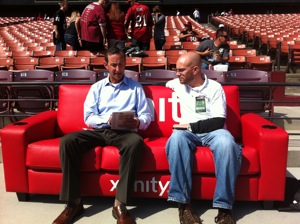 Maiocco: Well, I don't know how much of a sleeper he is anymore, but Tramaine Brock has had a really good camp and he's been Mr. Consistency. There's been a lot of injuries at the cornerback position and he's been showing up and doing a good job.

Alex Boone has played really well and he's a guy, he wasn't really good as a rookie, but they kept him around because they saw something good in him. And he had a great attitude, he's transformed his body, turned around his life. He was a little bit better last year and I think he's a whole lot better this year. I know he's working with LeCharles Bentley in the Cleveland-area. A guy who's played in the NFL and has helped him out a lot, and it shows. He's played pretty well and I think he's in the kind of position where you could think of him as a starter.

Some of the other guys, DeMarcus Dobbs, he's a defensive lineman. It's gonna be tough, just because it's a numbers game for him to make the team, but he's a guy that deserves a look.

Those are probably the guys that come to mind.

Fooch: You mentioned earlier, this couch is pretty...it's something else.

Maiocco: Yes, very nice. It's a lot like my reporting, firm yet giving.

Fooch: Thank you very much, I appreciate the time. 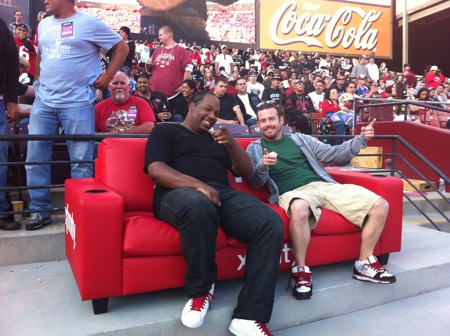