Sunday afternoon saw the 49ers secure a victory over the Seattle Seahawks thanks in large part to their defense and special teams. The offense had their moments, but even with a victory in hand, most of the questions about the offense haven't exactly been answered.

One issue on everybody's mind heading into the game was how Alex Smith would perform. Over the course of the game he was 15 of 20 for 124 yards and he also rushed for 22 yards and a touchdown. While he did not throw any touchdowns, he also did not compete any turnovers. Part of that might have been due to very conservative play-calling on third downs, but even still, no turnovers are no turnovers.

We had some discussion about how one would describe Alex's performance with phrases ranging from mediocre to solid. I personally think he did what was asked of him and was good enough all things considered. He had a high completion percentage but a low yards per attempt in part because the coaching staff kept calling short pass plays that the Seahawks were easily sniffing out.

When the 49ers would take shots down the field they seemed to hit them with relative ease and yet the play-calling did not take advantage of that. There could be plenty of reasons for that so I'll hold off on speculating too much for now.

While this could easily turn into the usual Alex Smith battle in the comments, I wanted to point to a common ground of sorts. The 49ers will look to improve to 2-0 when they host the Cowboys on Sunday. The Cowboys are coming off a tough loss to the New York Jets and Cowboys fans are lashing out at Tony Romo. these3words took a great screenshot from Blogging The Boys FanPost section. I've posted it below. You could plug in some Alex Smith titles and it could very well be Niners Nation. Maybe not as much about choking, but definitely critiques.

Their post-game thread had some absolutely epic comments and Kidd2Petrovic pointed out arguably the best exchange:

1 play doesn't negate every other play.
Romo actually played a heck of a game against a very good defense.

bring a great bottle of wine, tell some great jokes, bring some nice hors d'oeuvres and genuinely bring life to the party.....you going to overlook the fact that i banged your wife???

i dont know......would think that last thing cancels out the first 4

banging my wife is > bring wine and hors d'oeuvres.

it'd be more like spilling red wine on the carpet. the cost to get the carpet cleaned is less than the cost of the wine and hors d'oeuvres.

romo brought more to the party than he took away.

so u prepared to live with great numbers and being in every single game....but crucial mistakes at key points in the game and a narrow loss??

Comment two actually was probably a poor analogy, but it's still pretty hysterical. 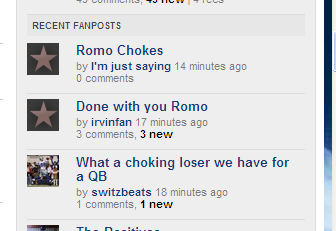 The context of Tony Romo's career in Dallas and Alex Smith's career in San Francisco are drastically different. Romo has had more success in his career, although that hasn't proven enough for Cowboys fans. On the other hand Alex Smith is either a talentless hack or he has been in a brutal situation throughout his career. It's never quite so black and white, but those are probably the easiest arguments to point to.

Although the two players have traveled different paths during their careers, fan debates about both players have raged throughout. I've always been a bit of a Tony Romo fan for much the same reason I've been an Alex Smith fan: They're good people doing what they can with tough situations. Of course, being a good person probably doesn't mean squat when it comes to winning football games.