Share All sharing options for: Scouting the Cowboys: Passing Game

If you weren't aware already, the 49ers are playing the Dallas Cowboys this Sunday at Candlestick Park. The Cowboys are a passing team, so I thought it would behoove me to write up a little scouting report looking at that aspect of their offense.

There are five main pieces to the Cowboys' offensive puzzle. Obviously their biggest piece is at the quarterback position. Tony Romo is a talent for sure, but over the years he just hasn't been able to get over that playoff hump. He has three main targets this season: Jason Witten, Miles Austin and Dez Bryant. The final piece would be Felix Jones, who is a featured back in the NFL for the first time in his career.

I took a look at a few of the Cowboys' offensive series against the Jets last week. Here is a breakdown of their offensive production and my observations of their passing attack.

Before I start breaking down film, here is the statistical breakdown of the Cowboys' offensive performance:

Those four players account for 17 of the 23 completions Romo had and were targeted 30 times out of the 36 total passes Romo attempted. Here are a few passing plays I took a look at:

They roll Romo out to the right and have Felix Jones running with him in the flat. Romo hits him in stride and Jones gains 11 yards on the play. Here Jones has a defensive lineman trying to cover him in the flat. The guy has no chance. Easy and well executed play to start the game.

Romo takes the snap from shotgun. Jason Witten lines up outside as a wide receiver. Dez Bryant runs a slant over the middle and Romo hits him in stride with a 10-yard pass. Bryant does the rest for a 42-yard gain.

Bryant lines up to the left against Antonio Cromartie. Romo throws a fade route to the end zone to Bryant. It's a well-placed ball where only Bryant can catch it. With his size and athleticism, it's a definitely mismatch. Bryant catches the ball for a three-yard touchdown. 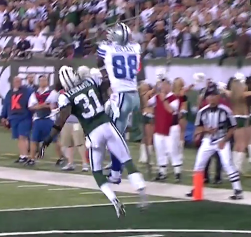 Bryant is just too big and athletic for most cornerbacks to cover on a jump ball.

The two tight ends are lined up off of the right tackle. Jason Witten stays on the line to block, but as Romo rolls to the right he releases and they set up a tight end screen for him. When Romo rolls right he draws two defenders towards him, which leaves Witten room to receive a pass and gain nine yards on the catch and run. It's a nice play that I hope the 49ers use with Delanie Walker and Vernon Davis. Both guys would be ideal for this play. 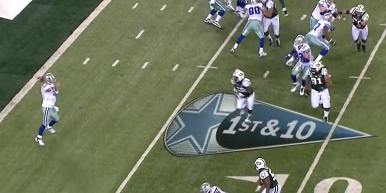 On this play Romo does a good job of sliding in the pocket to avoid a pass rusher. Miles Austin makes a nice move at the line of scrimmage to get a step on cornerback Antonio Cromartie and runs a go route to the end zone. Romo under throws him a bit but Austin is still able to make the catch. Him and Cromartie wrestle for the ball in the end zone, but the tie always goes to the receiver and it's a 36-yard touchdown.

Romo rolls to the right to buy more time, but he can't find anyone open in the end zone. He comes back to the left and runs up the middle. He dives to about the 1-yard-line but during the dive a defender is able to knock the ball out and the Jets recover. This was a huge play for the Jets, as they stop the Cowboys in the red zone and keep it a one-score game. Romo should have been more cautious here, as they had the ball near the end zone in the fourth quarter with a seven point lead. Even if they got just got a field goal it would make it a two possession game.

Romo rolls to the right and tries to find Bryant on the sideline. Bryant ran a curl route with Darrelle Revis playing man-to man coverage and a safety covering over the top. Revis reads the play perfectly and jumps the route. It was more than just a great play by Revis, however. Revis jumped the route so early that Romo should have been able to see before throwing the ball that there was no chance of completing the pass. The interception sets up a game winning field by Nick Folk. 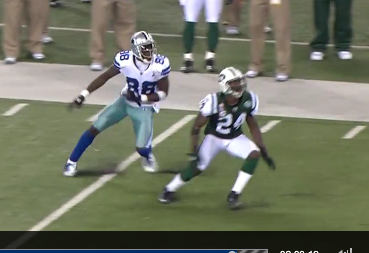 As you can see, Revis looks like the open receiver here, not Dez Bryant.

For most of the game, Tony Romo played very well. He made accurate throws, moved well in the pocket and he made good decisions with the ball. When he was able to sit in the pocket or throw on designed roll-outs, he was very effective.

Unfortunately, his two biggest mistakes came in the fourth quarter. The first one was the fumble. Romo did a good job of buying time for his receivers, but he got too greedy and tried to run for the end zone. With defenders closing in, he decided to dive to the one and the ball was poked free by a defender. The Jets didn't turn the turnover into points, but they kept it a one possession game.

The second mistake, however, resulted in a game winning field goal for the Jets. It was a tie game with one minute to play. Romo just made a bad read. Revis was with Bryant the whole way and it was clear that he wasn't open. Romo was throwing from out of the pocket but there wasn't pressure coming his way. Overall it was just a very poor decision by Romo.

This week's match-up against the Cowboys scares me though. I'm not worried about the 49ers stopping the run, but the Cowboys have an explosive passing attack with Witten, Austin and Bryant. Felix Jones can make plays out of the backfield as well. Bryant showed the ability to make plays both in traffic and in the open field. Witten has been the most reliable target for Romo the past four seasons and Miles Austin is one of the better receivers in the game.

The secondary is in for quite a challenge on Sunday. Donte Whitner vs. Jason Witten should be one of the key matchups. They like to move him all over the field, so it could be tough for Whitner to consistently match up with him. The Cowboys also have two talented receivers on the outside and cornerback isn't exactly the 49ers' strength. They are going to have to put pressure on Romo and hope he makes mistakes if they are going to have a chance to win this game.