NFL Kickoffs: Not As Dire As You Think

Share All sharing options for: NFL Kickoffs: Not As Dire As You Think

Last year when the NFL announced it's new policy regarding kick offs and moving the ball forward, there were many people issuing cries of dismay over how this would remove one of the most exciting parts of the game and how it would make return specialists and special teamers practically irrelevant.

During the pre-season we had touchback after touchback, nearly every one accompanied by some variation of "If the NFL wants to make kickoffs safer this is what they'll end up with."

I actually think the new rule will make kickoffs more exciting, not less exciting, and I think the evidence (after a whole week's worth of play) backs me up.

For a rule that was supposed to dramatically reduce the excitment quotient, it seems to me that it's actually increased it.

Then this bit of trivia:

So why is this happening now and not during pre-season? Two reasons I think. The first is that pre-season is the time for scrubs to make the team. You don't see everything that a team has and the special teams units are often made up of guys who won't make the team.

Secondly, I think coaches and players are getting used to how the ball is kicked now and are adjusting tactics to match it. Coverage units will have to change how they do business as well, or they'll end up getting burned more often than not.

I want to demonstrate why I think the new rule benefits the return game, and then talk about how I'd do things if I were a special teams coach. I want to use Ginn's td return from last Sunday as an example.

The first thing to notice about kickoffs is that the kickers are almost all doing the same thing as they've done all their careers, which is to boot the ball as far as they can into the end zone. Returners have been conditioned to not bring it out if it's in the end zone but that philosophy needs to change.

Here we have the opening formation of the kick. The first thing that strikes me is how far back the defense is. By the time the coverage unit gets to the opposing team they'll have hardly any room to maneuver in (and this is key). 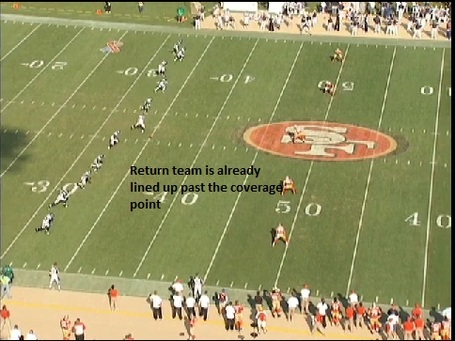 The ball is kicked and the coverage team runs all out, like they've been trained to do all their football lives. The 49ers have some great blocking going on. There are two nice clusters of blockers in front of the defenders. Ginn has just barely got the ball and already the coverage is at the 30 yard line. This gives them zero room for errors. 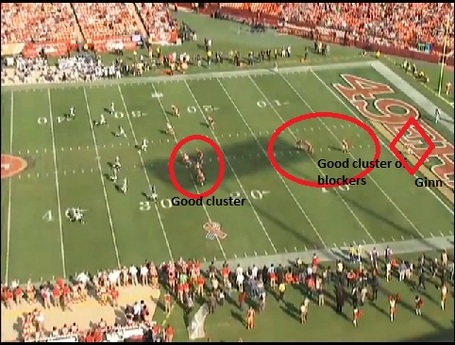 Ginn brings the ball out and everybody on the Seahawks is around the 49er 20 yard line. There is a huge amount of green space behind them if Ginn can make one player miss a block. 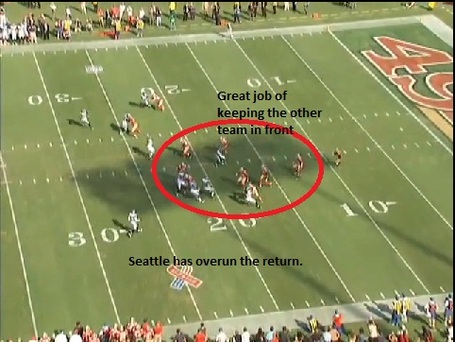 You can see the wall being formed and the blocking going on. 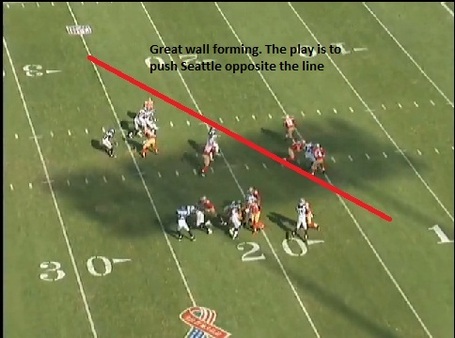 Ginn makes it around the wall and now there is just one man to beat. I don't think the kicker is going to be able to chase him down. 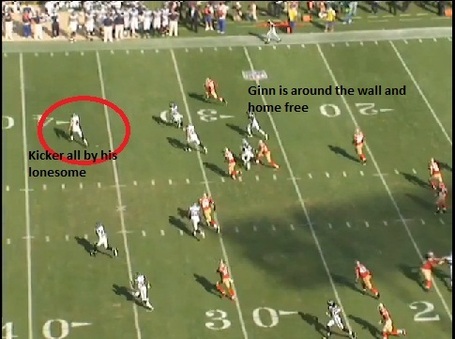 And he's off to the races. I do think that there was one Seahawk player who had a chance to push Ginn out of bounds had he lunged for Ginn but he didn't lay himself out. 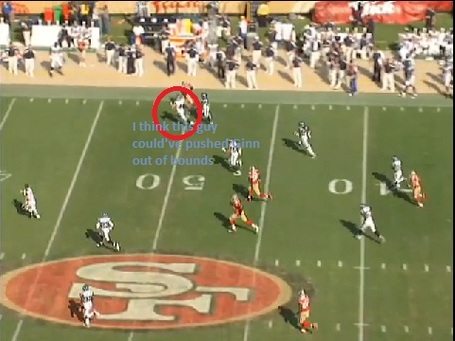 So here are the reasons why I think we'll see more big returns than last year.

1.) More and more players will be bringing out the ball when it's in the end zone.
2.) Coverage units are going to be going full out based on needing to make up 10 yards that they no longer need to. 3.) This will put coverage units deep into opposing territory by the time the ball is caught. This means they're already committed to their angles before the runner even starts moving.
4.) Since they're committed to their angles they have zero margin. They have to get the right angle or they're done for and it's off to the races.

How do you counter this as a coverage coach?

I do think that coverage units will catch up but I believe that we'll be seeing more TD returns than normal for a long time.