Share All sharing options for: Scouting the Cowboys: Front Seven

Yesterday I took a look at the passing attack of the Cowboys, and today I'll be taking a look at the front seven of the Cowboys defense. We all know how good, and frankly how scary, linebacker DeMarcus Ware is. He will be the focus of not only this post, but the 49ers offensive game plan this week as well.

The Cowboys aren't afraid to move him all over the field to exploit as many matchups as possible. In Ware's case, it's a mismatch in his favor pretty much across the board. Whether the 49ers are able to protect Alex Smith is one of the biggest keys to the game this week. They do not want NuVo sending Alex Smith prophylactics in the mail next week because he was sacked more than any quarterback in the NFL. Seriously, they sent Tarvaris Jackson a box this week after he was sacked five times by our 49ers.

Before we take a look at a few screenshots of the Cowboys' defense against the Jets, here are some defensive stats from the game:

Ware lead the team with two sacks and added three quarterback hits (sounds like Justin Smith numbers). They also did a good job of limiting the Jets to just 45 yards rushing and 2.8 yards per carry. The Jets ranked fourth in the NFL in rushing last season with 148.4 yards a contest. They didn't run much against the Cowboys, mostly because they were behind most of the game, but any time you hold a good running team to under three yards a rush you are doing a great job against the run.

Let's take a look at some of the notable plays the Cowboys had against the Jets last week.
Note: I didn't have a lot of time to put this post together, so I wasn't able to look at as many plays as I usually do.

The Cowboys are in their base 3-4 defense on this play with DeMarcus Ware playing at LOLB. He just demolishes the right tackle Wayne Hunter on this play. All it takes is an inside rip move and he sacks Mark Sanchez for a five-yard loss. 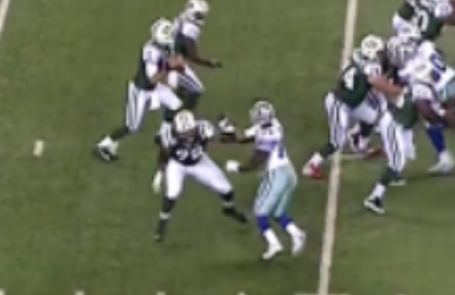 This time Ware lines up at left end with his hand in the ground. The Cowboys are in a nickel package with three down lineman and three linebackers. They send four guys to rush, as one of the middle linebackers blitzes. Ware again abuses Hunter and bull rushes him right into Sanchez's drop, but he's able to get rid of the ball quickly to Santonio Holmes for a five-yard gain. 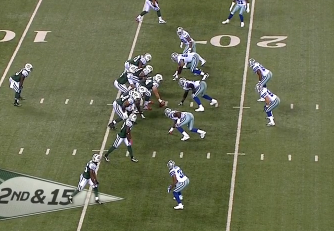 On this screen shot, DeMarcus Ware is lined up at left end.

On this play, the Cowboys only have their nose tackle with his hand in the ground. Everyone else is standing up. Ware is actually lined up as a middle linebacker here. He is about five yards back from the line of scrimmage when he starts his rush, and just bull rushes right through the Jets center Nick Mangold and sacks Sanchez for a six-yard loss. 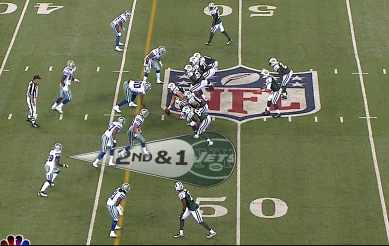 Ware is at the middle linebacker spot right next to the referee.

I'll start with and focus on the obvious: DeMarcus Ware is insane. He's phenomenal and he scares the crap out of me. The Cowboys are going to move him all over the field and exploit every mismatch possible (that could end up being the entire 49ers offensive line).

Even though Ware is technically considered a left outside linebacker, I noticed that he spends just as much time on the other side of the line. Sometimes they have him put his hand in the ground and play defensive end as well. The one matchup that really scares me is Ware vs. Anthony Davis. I can just see the Cowboys looking to exploit that matchup a lot on Sunday. I'd be interested to see how Alex Boone fares against Ware if A. Davis struggles.

If the 49ers can give Alex Smith time to throw, however, the chances of success go up considerably. The Cowboys gave up over 300 yards passing against Mark Sanchez, who isn't exactly elite. Their secondary is already banged up and should be vulnerable if Smith has time to throw.

The Cowboys did a great job against the run vs. the Jets, giving up only 45 yards, but that's a small sample size. Last season, they ranked 12th against the run and allowed 108.4 yards per game on the ground. The 49ers definitely need to get a better push in the run game by the offensive line on Sunday. Frank Gore rarely had much room to run against the Seahawks last week. Moran Norris staying upright would be a good start.