The San Francisco 49ers had plenty of reasons to be disappointed with the outcome of Sunday's game as they made numerous mistakes in blowing an eminently winnable game. The Cowboys battled their way back to victory thanks to a combination of their own execution and the 49ers missteps.

Nowhere were the missteps more blatantly obvious than on the final Cowboys reception of the game. The Cowboys were without Dez Bryant on Sunday and Miles Austin actually was unavailable in overtime due to a hamstring injury (a reasonable injury given all the running he did!). That basically left the Cowboys with Jason Witten, Kevin Ogletree and Jesse Holley as receiving options. Of those three, Jesse Holley was the one guy most people didn't expect much from. He entered the game with one career reception but left the game with a bit bigger reputation.

On the first play of the Cowboys overtime drive, Tony Romo decided to dispense with running formalities and quickly hit a wide open Jesse Holley with a 26 yard pass that Holley then turned into a 77-yard reception. The Cowboys were set up at 49ers one yard line and a chip shot later they had defeated the 49ers. Although Dan Bailey had missed an earlier chip shot, he handled this one with ease.

Head after the jump as we break down the breakdown.

Strong safety Donte Whitner was asked about the 77-yard reception and had this to say:

How about the end, the 77-yard reception, what happened on that?

"We were in quarters. We were in quarters to that side and there was a miscommunication with the corner and myself and the guy took off for that deep post. I'll let coach Harbaugh and the rest of the coaching staff really go in depth into that, but it was just a mistake."

In reviewing the game on my DVR, I actually think the mistake was a little simpler than a miscommunication in their quarters defense. Rather, the Cowboys ran a play-action pass and Donte Whitner appeared to bite on it. Mind you I'm basing this on what the regular television feed shows us. I don't have access to coaches film or the play-call for this. I'm simply basing this off what I saw while re-watching the play via my DVR.

Here are some quick screenshots to try and figure out the breakdown. 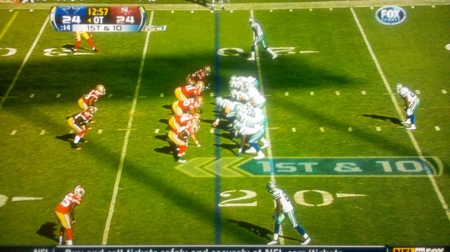 Holley is the receiver lined up at the top of the picture with Carlos Rogers across from him (and blocked out by the score). The 49ers defensive front seven appears to be a basic 3-4 alignment. Donte Whitner is not on the screen but rather a bit further back in a traditional safety position. I assume traditional safety position because he got up into the screen fairly quickly below. 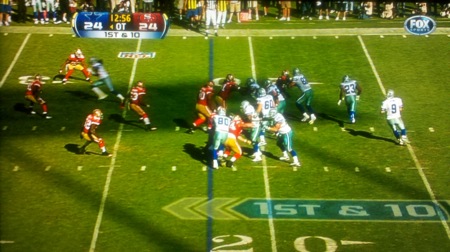 Picture two doesn't show it, but just before this shot, Romo faked the handoff to Tashard Choice, and at least five of the front seven went for the run initially. The 49ers player on the far left of the picture is Donte Whitner and he appears to have bitten on the play-action fake. He started to come in and just after this shot, he recognized it was play action and turned to try and pick up Holley. 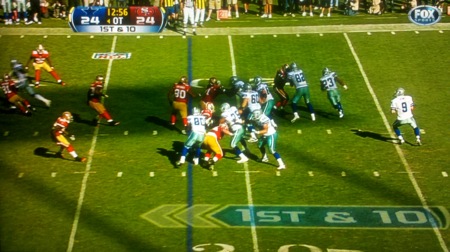 As we can see in picture three, Whitner realizes it is not in fact a run and has to turn back around to pursue Jesse Holley. While I can't comment on Holley's speed coming out of college, he was a gear or two ahead of Whitner since he didn't have to make a complete 180 mid-stride. Instead, Whitner turns in pursuit but it is probably too late because.... 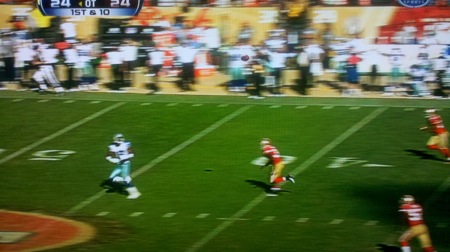 Jess Holley gets WIDE open. Holley can be seen looking for the pass and Tony Romo basically hit him in stride. I'll give credit to Whitner for not giving up on the play even if the field goal was a foregone conclusion. Patrick Willis made a similar tackle a few years ago against Arizona in overtime and the Cardinals kicker missed the subsequent field goal try. Alas it was not to be this time.

While Whitner and the 49ers coaches can tell us more about the defensive formation on that play, it appears to me that Whitner simply fell for a play-action fake. These kinds of mistakes happen but that doesn't make it any less frustrating. We could engage in hypotheticals all day long about what might have happened if the defense had made a play there. At the end of the day, the Cowboys executed when they needed to and the 49ers did not.