I went back and watched the game again, well...the running plays on offense anyways. Smileyman and I talked about each taking different angles on the reasons for the run-game not producing thus-far. I take the opinion that the offensive line is not opening holes for Frank Gore, and that he's still a good running back who hasn't lost a full step.

Smiley on the other hand contends that Gore has indeed lost a step and is at least partially to blame for the lack of rushing yards for the offense. I'm keying-in on the offensive line today and looking to see if they opened holes for Frank-The-Tank or not.

The 49ers opened the game with several pass plays in succession with the first run play not taking place until fifth play of the drive. On that particular play, Sean Lee knifed in from the backside and made the stop as Gore cut it to the outside. There was a sea of defenders in the center of the field as well as the backside cut. Gore tried to bounce it out but Lee knifed in as the extra defender to trip Gore up.

After the jump we'll take a look at some other plays and come up with a conclusion on how the O-Line played in the run-game.

With about 2:50 left in the 1st quarter, Gore was stopped for a short gain. Vernon Davis and Moran Norris missed their blocks. The tackle was made by a few linebackers as the DL was adequately blocked. The Cowboys DID have about 73 players in the box prior to the snap...perhaps an audible to a pass play was in order.

The very next play, everyone was blocked without penetration and Norris collided with a linebacker. Gore hit a defender head-on but had the yardage he needed in addition to winning the battle against the tackler, falling forward.

The next running play was another lead dive (FB leading through the hole, run up the middle off-guard). Everyone was sufficiently tied-up, though not driven back, and Norris made a collision. Gore gained three yards on the play.

Anthony Dixon came in next for the 3rd and 1 play. Mike Iupati pulled to the right and Norris made his block, allowing Dixon to gain about six yards. After a sack, Gore took a draw-play for nine yards through a spacious hole.

The next play had Delanie Walker and Moran Norris in the backfield. Walker runs past the end as though he didn't want to block him and instead picks up a second level defender. Iupati pulls but doesn't find a man to push out of the hole until after Gore has already entered the hole. Davis has double-team help to begin with, but then when he's 1-on-1 blocking, he can't keep the block. Anthony Davis also loses his man after a few seconds and the hole collapses just as Gore enters it. Norris once-again makes contact, but doesn't drive or control his man.

The TD play you can see what needs to happen on every running play: Offensive linemen past the line of scrimmage. They DROVE their men into the end-zone rather than just standing them up. Gore slips a tackle and shoots in underneath the big uglies. Staley and Norris lead the way through the hole and do a nice job.

With about 10:45 left in the 2nd Quarter, Gore loses a yard on a run play. Joe Staley misses his block, as does Chilo Rachal, and so does Moran Norris. Three defenders easily tackle Gore. A few plays later is a run called to the outside, off tackle, but Gore decides to cut back inside and is swallowed for a short gain. Delanie Walker was in the process of finding his man, which spooked Gore. I put that on on Frank, as there was only one man to beat.

Around 8:25 left in the 2nd Quarter is a toss sweep left. The right side of the offensive line did not make their blocks and Anthony Spencer and company pursued and were able to make the stop. Iupati and Davis double teamed a defender to the outside but Gore couldn't get outside of their blocks anyways as a DB was waiting near the sideline. The backside pursuit was just waiting for him.

Note: the next play was a moving pocket to the right, or "sprint-right Z option". Alex threw it right to Joshua Morgan on the run for a first-down. I like this play. Immediately afterwards was a run by Gore off left-guard. The play gained four or five yards on first-down via a good hole to run-through. Thus-far in the first-half the 49ers seem to be running the ball effectively for the most part.

Next run play was with about 5:20 left in the half. The blocking wasn't great, but notably you'll see Norris shoot through the hole, sliding on the grass all alone. Gore was stopped for no gain. With around 4:00 left in the 2nd Quarter, we see Adam Snyder missing his block and the OL generally not getting any drive forward. Snyder stood up like it was pass protection and his defender slipped by him to get in on the stop.

With just over a minute left in the half is a run off left tackle. Chilo pulls left and misses the first guy, ending up in the hole with nobody to hit. It was like over pursuit on his part. Gore still fights through a tackle and gains six yards.

With 14:57 left in the 3rd quarter Gore get's his first running play of the second half. Delanie Walker is late pushing his man out of the hole and Gore runs into him as he enters the hole. The line got no push again, so there were tons of bodies in the hole, even if most of them were occupied by a blocker.

With around ten minutes to go in the 2nd quarter, Gore is stopped for a short gain. Again there were at least five defenders in the hole. Anthony Davis and Jonathan Goodwin both didn't hold their blocks more than one second and both defenders were involved in the tackle.

Gore's next run play takes place with 14:27 left in the 4th quarter. This time there was a decent hole off left guard and Gore is tripped up by the shoe-laces in the hole. He probably could have broken that tackle. Goodwin's man twisted underneath the block and dove for Gore's legs in the hole. Not the easiest tackle to break, but there was some semblance of a hole.

The next play goes for about six yards as Norris makes contact and Gore runs up Iupati's back. Both men were downfield at least three to four yards on the play. This was the play they called Snyder for illegal formation. The next play saw Anthony Spencer beating Norris and jumping on Gore's back...not a tackle I'd expect anyone to break.

Now we're in the six minute portion of the 4th quarter. The team needs to burn some clock. After a passing play and a timeout, the team runs the ball with Gore which goes for two yards. Vernon Davis' block on Demarcus Ware was half-assed, to say the least. He reached out with his arms and then Ware disengaged and dove in towards Gore's feet. Goodwin's man again was able to shed the block and get in on the tackle, too. If Davis had pushed Ware outside and held the block, there was a huge lane ahead of Gore.

Now we reach overtime. After completion to Ted Ginn for a first down, the ball goes to Gore. It was a draw play and Gore burst through the hole for seven yards, colliding with Keith Brooking along the way.

I had to post this coaches angle of the long pass to Holley...The reason is that I don't think the coverage was Cover 4 (or "Quarters). You can see Madieu Williams drops down the numbers, but Tarell Brown sinks to the sideline like Cover 2 or even Man-to-Man on his guy. If it was Cover 4 you'd have seen Brown drop straight back to a depth similar to that of Madieu's. This had to be Cover 2, meaning that at least ONE of the DB's on the top of the screen was supposed to drop back along the numbers to take that half of the field. You can see that both men froze on the run-fake and there was NOBODY to make the play. 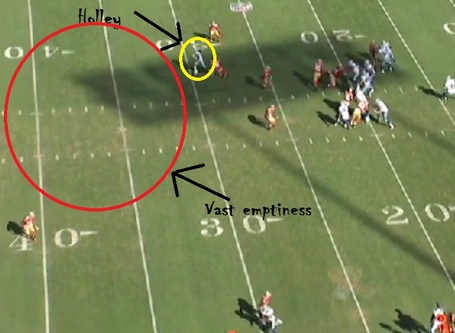 My conclusion from the running plays I watched was that the offensive line got no push in this game. Even when they blocked their man, they didn't take him anywhere and the guy usually disengaged and got an arm on Gore. There were generally at least five bodies in the hole with no real seam.

The Cowboys definitely sold out on the run and the 49ers did nothing to make them question that strategy. I saw Gore miss a few cutbacks or broken-tackle opportunities but for the most part there was nowhere to run. I can't really put any of the lack of success on Gore.

Lastly the players I'm most disappointed in are Vernon Davis, Moran Norris and Jonathan Goodwin. Davis didn't seem like he cared about blocking all that much, perhaps validated by his post-game comments. Norris had a better game but still missed too many blocks altogether or didn't hold them long enough. Goodwin was manhandled and got no push, had no control of his man.

For another great read breaking down the OL play, check out Bay Area Sports Guy's post.