Share All sharing options for: The Inconvenient Truth, Part 2

There was lots of good discussion between my post and Tre's post. I'm going to take the time to rebut the arguments made in defense of Gore and then present visual proof as to why I feel Gore has lost his spring.

The most common arguments I heard about not blaming Gore for the poor performance are these:

1.) He's got a new center and coordinator and a new terminology

In other words this team has been incredibly dysfunctional his entire career yet he's managed to produce. What makes this year different? His hip injury from last year and his ankle injury from the year before. It adds up.

2.) The line isn't getting any push. I'll demonstrate that this is wrong after the jump.

Even if it wasn't getting any push it's almost exactly the same offensive line as last year when he averaged a full yard per carry more through the first two games. If it was the line to blame he should have had the same performance last year as this year.

3.) You can't use YPC as a measurement for how well a running back is doing.

Sure you can, as long as you remain consistent in year to year examination. If I use ypc one year and then switch to some other advanced stat the next year that doesn't work. If you compare ypc year to year it works because you're comparing the same thing. It might not work as a measurement to compare league wide (e.g. ranking the top 5 running backs in the league), but as a year-to-year performance metric it's as good as any other.

One other point to make here. Do we not use total yards and yards per reception to measure wide receivers? If we do (and we do) why are running backs exempt from this?

The truth is that Gore is averaging a paltry 2.5 yards per carry thus far. The worst he's ever done in the NFL on a season basis is 4.2. I can hear your reply "But smileyman, it's only two games into the season!" Thing is Gore has never needed to "find his legs" before. He's always started strong, even from the beginning. In addition, he's had more carries in the first two games of this season than he has in the first two games of any season of his career, so he's actually had more chances to "find his legs"

I think it's hard to argue that this is a statistical anomaly given that Gore is averaging 21 carries per game plus another 3 or 4 passes a game. Speaking of passes, let's look at his two game averages for those.

This is his lowest yard per catch average since 2006 which was his first year as a starter. It's a full yard per reception less than the last two seasons. His career average for the first two games (useless statistic I know) is 8 yards per catch, so he's a full 2 yards per catch below his average.

Next, I'll review every play from the Dallas game where Frank Gore touched the ball.

1st play (1st and 10)--Swing pass to Gore. He doesn't make the corner, and Sensabaugh brings him down. You can't ask for better than a one-on-one match up like this where you're two inches shorter and out weigh him by 10 lbs. No gain. The old Gore would've relished this contact and driven him back. 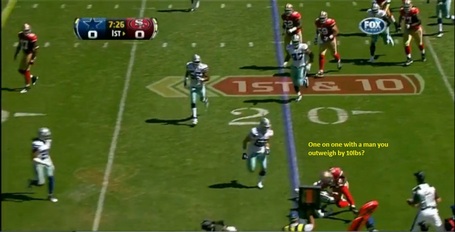 2nd play (2nd and 1)--Dallas expects run. They've got 7 men in the box. 49ers have brought in 7 men to block (5 offensive linement, a TE, a FB). Gore gets the ball, Moran Norris gets a decent lock on his man and it looks like there's room to run. Except for there isn't, because Moran Norris decides to let his guy go and he tackles Gore for a 1 yard loss. This one is all on Norris. 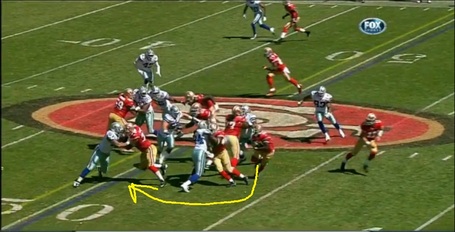 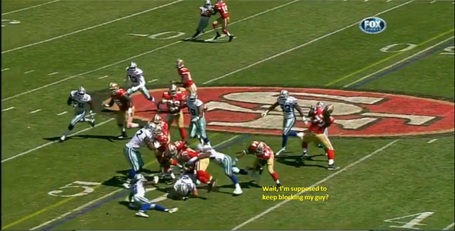 3rd play (2nd and 2)--It's a sweep to the left. There's some last second motion to load that side up. There's ok blocking, but Gore chooses to cut inside instead of going outside, and there's nothing there. He's not helped by Moran Norris completely missing that A. Spencer is about to tackle Gore, and instead choosing to fall flat on his face. I think this can be laid at both Gore and the line.

4th play (3rd and 1)--Dallas is really stacking the box here. Huge hole, Gore gets a one-on-one match up and gets 3 yards, though I think there was a time he could've put on his burst and broken that tackle. Great blocking by the line here.

6th play (1st and 15)--Gore was the designed fall back option. He steps up into the middle of the pocket as if he's going to block. He then squirts through it into the open space that the ILBs have just left and Alex dumps a shovel pass to him for 11 yards.

7th Play (2nd and 4)--Classic run up the gut for three yards. This is good blocking by everybody. With this call you just push on the pile to get the 3 or 4 yards you're aiming for.

8th play (3rd and 1)--I want to highlight this one because Gore goes out and Dixon comes in. The Cowboys do the very definition of stacking the box. The line opens a nice hole on the right side, Dixon sees it and takes off for 6 yards.

10th play (1st and 10)--It's a run off the right side of the center. Iupati is pulling and doesn't even see the defender coming through. This one is on Iupati. 1 yard gain. 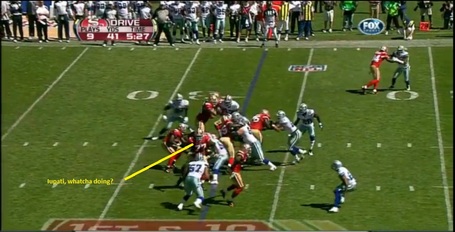 11th play (1st and goal from the 1)--Nice big hole opened for Gore to go through to get the TD. 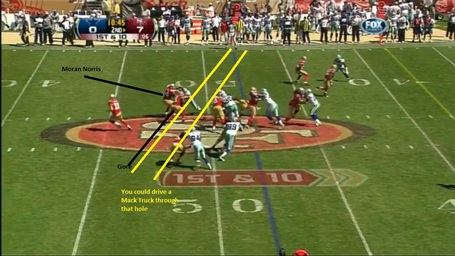 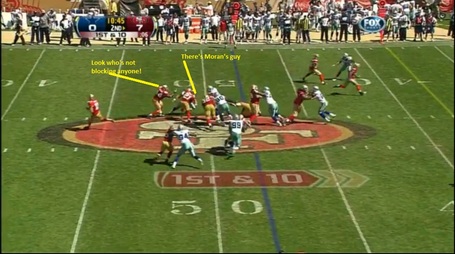 12th play (1st and 10). Great blocking by the offensive line. Moran Norris locks up his man. Oh wait, never mind. He doesn't lock up his man. Loss of a yard. Now Goodwin had a horrible block on this one too, but I think that if Norris had held up his man for longer than half a second Gore could've made the corner.

13th play (2nd and 11)--swing pass to Gore who heads to the sideline ignoring all the space in the middle of the field. Pushed out of bounds after a 4 yard gain, but he should've been able to get more had he cut inside.

14th play (1st and 10)--There's room to the right and left and even a lane in the middle if he hits it fast enough. He chooses to follow Moran Norris into the fire and gets burned. No gain. 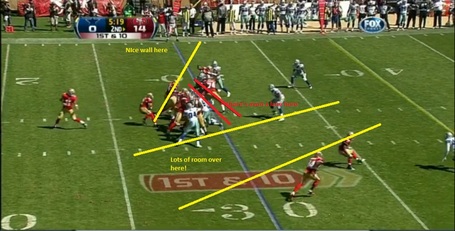 15th play (3rd and 19)--Gore up the middle for one yard. There's actually quite a bit of room there. The Gore I remember had a little burst he'd apply in situations like this to get past the congestion. You can't ask for more than this from an offensive line.

16th play (2nd and 10)--Gore off left tackle. He gets a one-on-one situation and carries the defender for a 6 yard gain. This is the only time he did this the whole game, and it's what he used to do all the time. 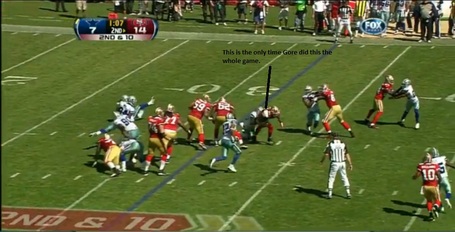 17th play (2nd and 10)--The play is called as a run off the left guard. To me it seems as if there's a decent amount of room there if Gore can get a burst of speed going. He does get 2 yards, but had he demonstrated his burst that he used last season I think he could've been home free. To say there's no push would be inaccurate. This is the same kind of thing we see on the next play too. 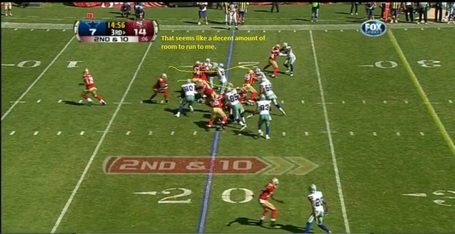 18th play (1st and 10)--Some decent space develops in front of Gore. Again, this is another situation where if he had broken the tackle it was off to the races. 2 yard gain

19th play (1st and 10)--There's a nice wall in front of Gore with an opening off right guard and lots of space if he bounces outside. Instead he has no vision and quickness and goes right up the gut and of course is stopped short.

20th play (2nd and 13)--Call is a run off right tackle with Iupati pulling. He completely misses his block, being too focused on going down field. This is all Iupati. No gain.

21st play (1st and 10)--Gore up the middle for two yards. Part of the blocking had VD on a defensive end which is not a good matchup, however had Gore used his old burst he could've made it through. I lay this one at VD and Gore both. 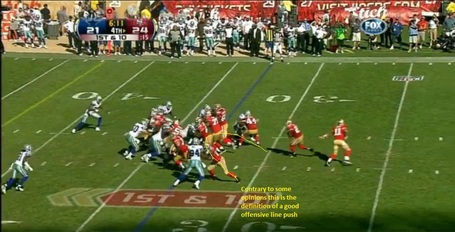 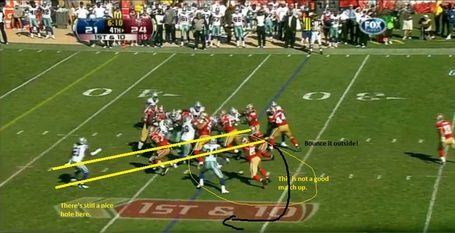 22nd play (1st and 10)--Offensive line opens a nice hole and Gore gets 7 yards up the middle easy peasy.

So here's how I see it. Gore made two great plays by himself this game. One is the little pass where Gore kind of squirts through the middle of the offensive line. The other is when he drags a defender 6 yards. All of the other big gains were due to terrific blocking by the offensive line.

The many times when Gore ran for little gain or a loss can be attributed mostly to either him not having a good field of vision, being too tentative in one-on-one situations, or lacking his old burst. I know that people are going to argue that Gore never really had great vision and ability to break to the open space, but if that's the case we're then left with a power back who no longer has power. At that point what good is he in the NFL?

Moran Norris is repsonsible for 3 or 4 poor runs by himself due to his failure to block. VD is responsible for one. Also Iupatid did not have a good game blocking. This game he seemed to have a tough time pulling and being able to block on the move.