Share All sharing options for: Michael Crabtree Non-Touchdown Touchdown In The Back Of The End Zone

One of the more "controversial" plays of the 49ers-Bengals game came with 6:40 left in the third quarter. The 49ers faced a second and goal at the ten yard line. The 49ers ran a fake toss to the right, Alex Smith rolled to his left, and after looking for an open man, Smith fired a pass high into the back of the end zone. Due to a defender draped on Michael Crabtree and another coming across, Crabtree leapt probably to the limits of his abilities and hauled in the pass for what appeared to be a touchdown.

Unfortunately as the camera showed Crabtree leaping into the air, in the background you could see the referee throwing off his hat. This is the official indication that a player stepped out of bounds and was the first player to catch the ball. Once the play ended, the ref threw his flag and Crabtree was called for an illegal touch. When a player steps out of bounds, he can not then be the first player to touch a pass.

There has also been some discussion as to whether the 49ers could actually challenge whether Crabtree stepped out of bounds. It was my understanding penalties are not challengeable, but when it's something relatively black and white like foot in or foot out, is that then allowed to be challenged? I still can't figure out the rule so if anybody can find a link with details, please post it. 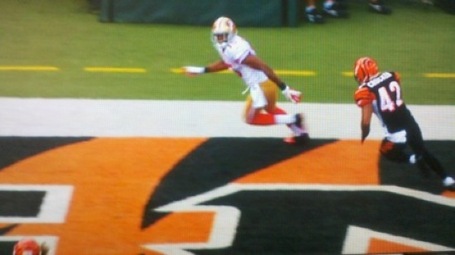 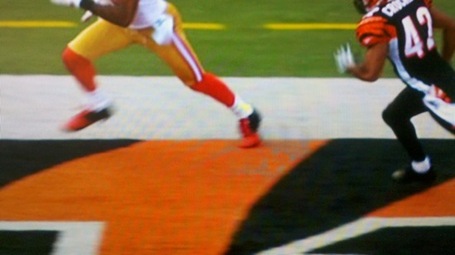 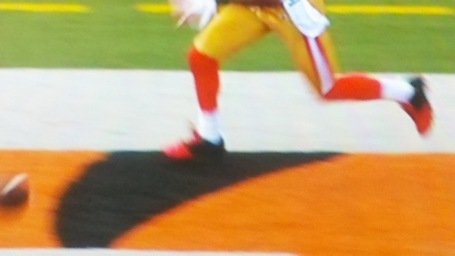 That last picture is the closest to appearing out of bounds. I couldn't come up with video of the play but on the video replay from which I grabbed this screenshot, a less fuzzy version appeared in bounds. While we do have the benefit of slowing down the play, the referee who threw the flag was right there and appeared to completely whiff on the call.

Michael Crabtree had his own thoughts on the play:

Whatever the case, it was so close to being an absolutely phenomenal play. A well-placed pass and a fantastic catch. Sometimes things just don't break your way. Such is life.