After the first two games, Davis only had 7 receptions for 65 yards and averaged less than 10 yards per reception. Last season, he averaged 16.3 yards per catch, which was the highest it had been in his career, and that was with Jimmy Raye's offense. With Jim Harbaugh, a man who loves his tight ends, we expected more involvement from Davis.

Sunday against the Bengals, he got his wish, though he was the only 49er to have more than 25 receiving yards. The 49ers still have not figured out to best utilize all of their weapons, but this is a good start. You have to like that the coaching staff said they needed to get V. Davis more involved, and then actually executed it on game day. It's refreshing to say the least.

There were three plays in particular that stood out to me, and after the jump I'll delve into them (with screenshots!).

It's a run-heavy formation, but they do not use a play fake here. Davis starts off lined up off right tackle and motions to the left off tackle. Davis runs a wheel route here, but at first glance it looks like he is just taking off to the flat. He has safety Chris Crocker (not that Chris Crocker) defending him man-to-man, and he assumes this as well. He tries to jump the route and as he does that Vernon Davis turns up-field down the sideline. All Alex Smith has to do is loft the ball to him and Davis gains 22 yards on the play. 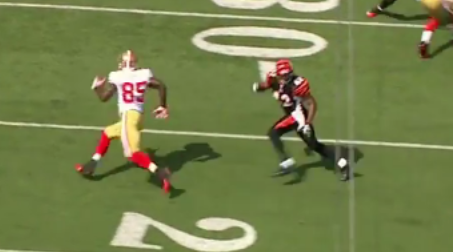 As you can see here, Crocker jumps the route in the flat and it's far too late for him to turn his hips and keep up with Davis as he turns up-field. I'd love to see them use this play more often. I'd be interested to know if this was an option route where if Davis sees the defender jump the route to the flat he is supposed to run the wheel route. 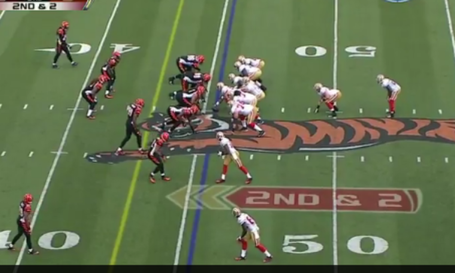 Davis lines up off of the right tackle here. I can't be sure, but I think I heard Smith yell "kill, kill, kill" at the line of scrimmage. Davis then motions right and lines up at wide receiver at the top of the screenshot. If a quarterback says "kill" at the line of scrimmage, it usually means he wants out of the original play call because of something he sees in the defense. I'd be willing to bet the original play call was a run, but Smith audibled to a prearranged pass play because of the defensive alignment he saw. 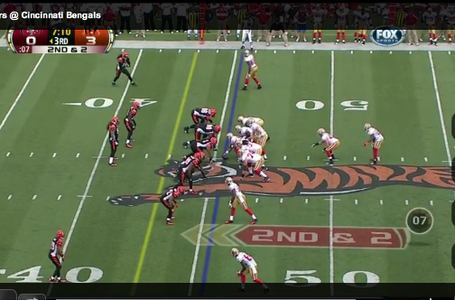 After the audible, Davis has one-on-one coverage against free safety Reggie Nelson with no coverage coming over the top. The strong safety has two receivers on his side of the field to worry about. Davis runs a go route and is able to get a step on Nelson. Smith throws a perfectly placed ball to Davis for a 39-yard gain. Three years ago he doesn't make that over-the-shoulder catch. This play showed great recognition and execution by the 49ers offense. 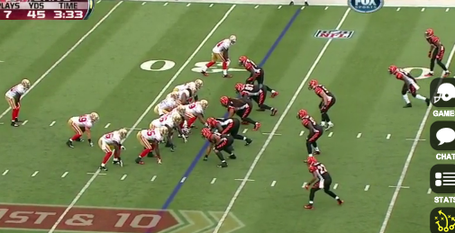 On this play the 49ers took advantage of the Bengals aggressively playing the run. It's a run heavy formation, with two tight ends lined up off tackle and fullback Bruce Miller also lined up to the right of Frank Gore. The formation screams "we are running to the right." Smith play-fakes to Gore and all of the action on the play goes right, except for one player...Vernon Davis. After blocking a linebacker, he releases to the flat on the left side and has nobody within ten yards of him. All Smith has to do is loft the ball in his area and Davis does the rest. He makes a guy miss and gains 20 yards on the catch and run.