Scouting The Seahawks: The Run Game

Share All sharing options for: Scouting The Seahawks: The Run Game

Earlier this week I took a look at Tarvaris Jackson. Now it's time to take a look at the Seahawks' running game. They have three solid backs in Marshawn Lynch, Justin Forsett and Leon Washington. Lynch is their big bruising back, while Forsett and Washington are small and quick.

Like the 49ers, the Seahawks offensive line was up and down (mostly down) during the preseason. They especially had trouble with pass protection. Sounding familiar yet? I took a look at the tape from the Seahawks' third preseason game against the Denver Broncos and that is pretty much what I saw. The offensive line just did not get it done, giving up five sacks and limiting the run game to a paltry 3.1 yards per carry.

After the jump, we break down several running plays.

Tight end starts lines up off left tackle and motions to the right side of the line. The fullback lead blocks to the right. It's a run off the right tackle all the way. The Seahawks don't do much to disguise their intentions here. The Broncos read it all the way and Forsett can't get to the outside. There is no gain on the play.

The next two plays are passes, none of which gain a first down.

2nd and 10: Couldn't catch the formation. The Seahawks TV people really screwed me over.

This is a run between the guard and center to the left side of the line. It's a pretty straightforward run play. Nobody is pulling to make a block. It's just a vanilla "push your guy back, don't get beat" play. Forsett gains four yards.

3rd and 6. The Broncos commit an encroachment penalty to make it 3rd and 1.

The Seahawks come out with a heavy run formation. The play is designed to be a stretch run to the left. The blocking isn't great, as the offensive line allows penetration by the Broncos, but Thomas Clayton (yes, that Thomas Clayton) is able to bounce it outside to gain a first down. Again, a pretty vanilla play. 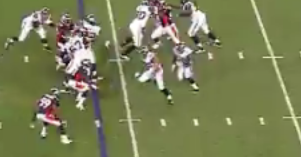 It's a run up the middle by Leon Washington. Zach Miller is lined up next to the right tackle, and they do something interesting with him. They have him pull to the left back to the middle of the line to be the lead blocker for Washington. Unfortunately, he can't make the block to stop the linebacker filling the gap and Washington is stopped for no gain. Still, an interesting play.

There are two WR's lined up the left. They run Leon Washington on another stretch run to the left side. The offensive line gets flat out beaten on this play. They allow penetration immediately from two defenders and Leon Washington has nowhere to go for a four-yard loss. 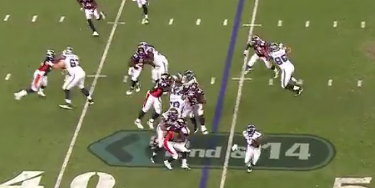 Finally, a formation that doesn't scream "we are running this way" and a decently clear screenshot (sorry). Leon Washington is again the back for the Seahawks. They have Mike Williams lined up to the left and two wide receivers to the right. They run a stretch off of the left tackle. Mike Williams makes a great block on the outside and the offensive line gets a good push. Washington is able to use his speed to get to the outside for a 10-yard gain.

The Seahawks ran the ball 19 times against the Broncos and gained only 58 yards. That's good for 3.1 yards a carry. Their first team offense managed only three points, courtesy of Jeff Reed. Part of the reason they didn't run much was probably the score of the game. They were trailing 17 -3 going into the fourth quarter.

They had a tough time running the ball on 1st and 10, at least from what I saw. It should be noted that they were probably playing things very vanilla, but I still saw their offensive line losing one-on-one matchups too frequently.

Having said that, I do expect the 49ers to be able to contain Seattle's run game, even with Marshawn Lynch healthy for week one. I would look for the Seahawks to try a decent amount of swing passes and screens to their running backs if they can't get the run game going, especially to Justin Forsett and Leon Washington. If those guys get into space, they can make plays. It is worth mentioning that the 49ers have struggled defending screen passes in the past. Hopefully with new starters and a new coaching staff that won't be the case Sunday.