There really is no shying away from what was the biggest play of the game. There were plenty of big performers throughout the afternoon, but Vernon Davis' touchdown catch with nine seconds left in regulation was THE play of the game. After a season filled with ups and downs, Vernon Davis had the biggest up of his career. A few days after talking about how frustrated he was with the playbook at the beginning of the season, Vernon Davis seized the spotlight on a huge stage.

I don't know how much NFL Films will want to air the third quarter of the 49ers-Saints game, but if they have to to get to the final four minutes of regulation, I would imagine they will make the sacrifice. That insane close was capped by Vernon Davis hauling in a pass that was highly reminiscent of The Catch II. The Catch III might not settle in, but it was still an epic catch. Alex Smith fired in a bullet to Vernon Davis who took a pop from Roman Harper and held onto the ball. The play was even more eerily reminiscent of The Catch II as Vernon emerged crying and was hugged by Jim Harbaugh.

Head after the jump for some video and analysis.

This was not quite Steve Young stumbling backwards and firing into Terrell Owens as he was cracked by a pair of defenders. This was not Joe Montana rolling right and throwing it where only Dwight Clark could make an impossible catch. Instead, it was Alex Smith firing in a pass on a play Coach Harbaugh later said was called Vernon Post. According to Coach Harbaugh, the play was a pass to Vernon Davis or throw it away and kick the field goal.

Vernon struggled a bit at times with his hands late in the season, but they were as sure as could be on Saturday. He hauled in a pass that Smith had to fire as hard as he could. The pass had to come out of Alex's hands very quickly and he got rid of it just quickly enough.

However, amidst all the hooplah of Smith to Davis, there is one player who played a key role without ever touching the ball. Backup tight end Justin Peelle ran a shorter route in front and to the left of Vernon Davis (looking at the screen). That route actually froze a linebacker just enough to make the difference. Sam Lam pointed this out on Twitter and I had a chance to review the play so here are some pictures from the play. 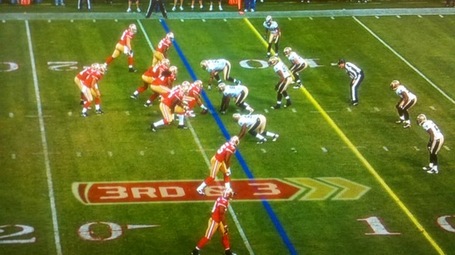 Here's the formation with Peelle on the far left and Vernon Davis just to Peelle's right up top. 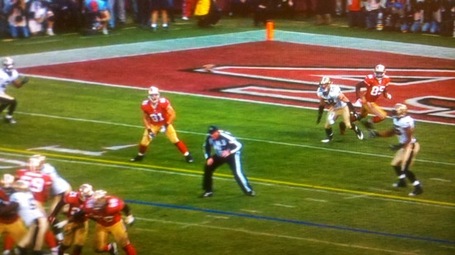 As you can see, Peelle was absolutely wide open. Smith could've fired the ball in for the first down and used the last timeout to stop the clock with about ten seconds left. That's enough time for one more try before the field goal attempt, but who knows how that would've played out. The key though is that No. 58, Scott Shanle, is frozen for just a split second before the pass to Davis. 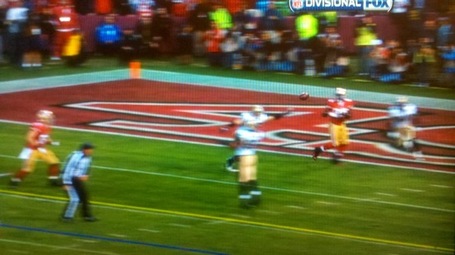 Alex fires the pass and the ball is too far past Shanle for the tip (sorry for the blurry picture). Roman Harper is coming in behind Davis but he won't get there in time to get a hand on the ball. He had to just go for the big hit, but Vernon hung onto the ball.

We spent much of the week concerned about Delanie Walker, but Peelle was a sufficient threat that it might have cost the Saints the game. OK, maybe not entirely, but he was an important part of Vernon-Post, which could join Sprint Right Option (The Catch) in the annals of 49ers lore.