49ers Vs. Saints: Justin Smith Is A Monster

Share All sharing options for: 49ers Vs. Saints: Justin Smith Is A Monster

I don't know how many times it needs to be said, but if there is any doubt about how awesome Justin Smith is as a defensive player, I don't know what else I have to do to sell you. There can always be arguments for who should be Defensive Player of the Year and I believe all the ballots are in before the postseason. However, if there were any straggling ballots, Saturday's game might have made voting for Justin Smith a little bit easier.

If a person just looks at the score and some of the basic statistics, the 49ers defense would appear to have struggled immensely. They gave up 472 yards of total offense and a fairly ugly final two Saints drives. And yet, if you watched the game, I don't think it is nearly as clear-cut as that.

The 49ers defense had its low moments, but I would contend they stepped up enough to more than make up for a few blown plays. There was indeed some overpursuit by the secondary. There were times Drew Brees had a little too much time to complete his passes. At times, Jimmy Graham seemed to have his way with the 49ers linebackers and secondary.

And yet, even still, the 49ers defense found ways to make plays. We can't overlook the Saints scoring drives, but we also can't overlook plays like Justin Smith driving Jermon Bushrod back into Drew Brees, which I believe resulted in an incomplete pass. Smith had three tackles and one sack in the game, and yet that does nothing to explain just how important he was in getting pressure (five hits) on Drew Brees. Justin Smith was one of Coach Harbaugh's "Mighty Men" all season long and we got to enjoy more example of that on Saturday. Head after the jump to view the physicality. 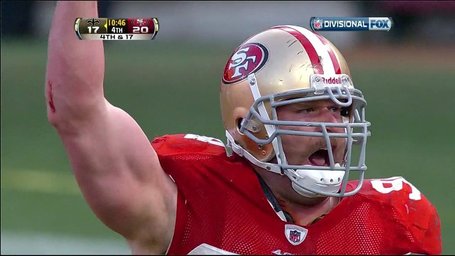 Speaking of that blood on Justin Smith's arm:

Justin Smith ruined my shirt w/ a blood stain after the game when i hugged him.Not his blood.He kicked ass yesterday!

Everything about Justin Smith is epically awesome. What else is there possibly to be said about him? I mean, seriously?