49ers Vs. Giants, NFC Championship Game Weather Report: It Could Get Ugly

Share All sharing options for: 49ers Vs. Giants, NFC Championship Game Weather Report: It Could Get Ugly

This past Saturday, the weather was about as perfect as it could be for the 49ers-Saints game. There was very little wind, the sky was completely clear and we had temperatures in the imd-60s. A day later the weather dropped into the low 50s and it has been cold (for SF) since. As we head towards Sunday's 49ers-Giants NFC Championship Game, we could be looking at some drastically different weather. 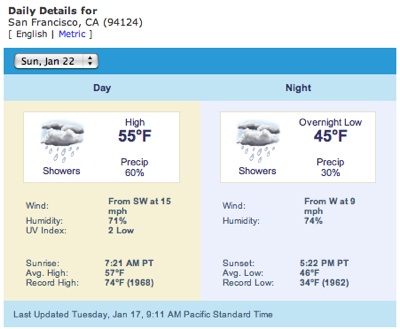 Showers and 15 mph wins are nothing to sneeze at, but it is possible the weather could get worse by Sunday. Tre9er tweeted out a Bay Area weather advisory that calls for possible heavy rain and locally strong and gusty winds at times. If any part of San Francisco is going to get hit heavy with this weather system, Candlestick Park is high on the list. They warn of potentially significant weather changes, so we'll keep an eye out to see whether it gets better or worse.

If the weather is windy, rainy and generally nasty, one has to imagine there is a sizable impact on the Giants passing game. Eli has proven to be a very solid quarterback so it will be interesting to see how he performs in particularly adverse conditions. He's played in some nasty conditions during his time in the NFL, but this could get pretty bad. With a particular slick environment, it will be interesting to see if we have a continuation of the divisional round fumble issues that cropped up in the NFC.

Any thoughts on the overall impact for both teams?