49ers Vs. Giants: What Are Your Viewing Plans?

Share All sharing options for: 49ers Vs. Giants: What Are Your Viewing Plans?

The 49ers and Giants get going in less than 48 hours, which means everybody needs to figure out their viewing plans. I'm down in Las Vegas for the weekend and will likely be watching the game somewhere at the Mandalay Bay. Viewing plans remain TBD. There's a chance I end up watching most of the Patriots-Ravens game at the Sports Book and then watch the 49ers game upstairs in my hotel room. I'm not sure I need to be around some of the obnoxious folks that will be going crazy in the Sports Book.

What are people planning for Sunday's game? Anything new or something similar to last week? If you are planning a viewing party at your home, I got an email recently from some folks connected with Bus Stop in San Francisco with a great drink idea. They came up with something called "Big Red" for the game. It is available at Bus Stop, but they provided the recipe if you want to make it at home. I've also posted a picture of the drink after the jump.

Combine ingredients in a shaker over ice.
Strain and serve on the rocks. 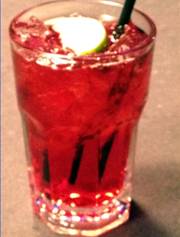