I'll call your Tebow and raise you a Kaepernick.

The San Francisco 49ers return from their east coast road trip with a dominant 34-0 victory over the New York Jets.

"I was going to say we got our butt kicked, but really, we got our ass kicked," said Jets head coach Red Ryan. "There's no two ways, ins or outs about it."

The Jets, now 2-2, were outplayed, outcoached, and out-Tebow'd.

49ers backup quarterback Colin Kaepernick had tasted regular season action before but was utilized on Sunday more than any other game in his NFL career. The "WildKaep" formation was unleashed early and often. In the first quarter, Kaepernick, on a zone read option, ran for a 17-yard gain. On the same drive, he threw a bomb downfield to Randy Moss. Though the pass was dropped, it forced the Jets defense to stay honest and respect the deep ball.

Then, early in the second quarter, the 49ers were at the Jets' 7-yard line. Kaepernick received the snap out of a shotgun formation and ran the ball in for a touchdown. It was the first score of the game and the first of Kaepernick's career.

After the play, Moss retrieved the ball from the ground and gave it to Kaepernick - a memento to mark the special occasion.

Jets backup quarterback Tim Tebow, acquired in the offseason to play a similar role, did not fare as well. Tebow finished the day with two carries for no yards. He also completed a 9-yard pass to tight end Dedrick Epps, but the ball was fumbled and recovered by the 49ers.

How does Kaepernick feel about the comparison to his Jets counterpart?

"I want to be me. That's all I'm worried about," said Kaepernick. "I want to go out there and play like myself."

The 49ers' offensive line played arguably their best game of the season as they ground and pounded the Jets into submission. Nine different players contributed to the running game (including two endarounds by receivers Ted Ginn and Kyle Williams), and each gained at least 5 yards on the ground.

San Francisco finished the day with 245 total rushing yards and three rushing touchdowns. Kaepernick, on a run in the closing minutes of the game, would have scored a fourth touchdown. Instead, he opted to slide onto the ground at the 3-yard line so the 49ers could enter the victory formation and secure the win.

"It's amazing," said tight end Vernon Davis. "If we can get everybody involved, I think we'll have a greater chance of winning games. We're trying to get all our playmakers involved."

The Jets laid a big, fat goose egg on the scoreboard as they were shut out in their home stadium for the first time since 1989. It was their third largest deficit ever in a home shutout loss.

The Jets were held to 145 total offensive yards the entire day.

"It was a great team effort. Our defense played extremely sound," said linebacker Patrick Willis. "There were a couple of plays that we wished we could get back, but for the most part, I think we did what we needed to do to have a successful day on defense."

Willis was thrilled about the prospects of a shutout and made sure the second-string defense finished the job.

"I told Ricky [Jean-Francois], I told Cully [Chris Culliver], I told Ian [Williams]...I was like, ‘Ay, ya'll keep that zero up there. That goose egg looks good.' " 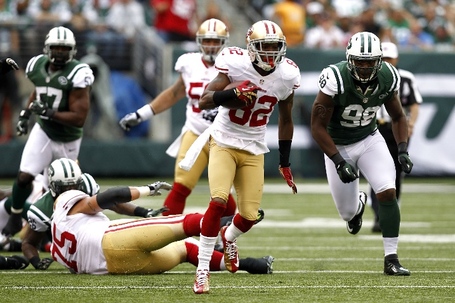 Mario Manningham is probably the 49ers' most multidimensional receiver. Halfway through the second quarter, Mario Manningham led the team in receiving and rushing yards. From screen passes to endarounds, Jim Harbaugh and Greg Roman are finding creative ways to implement him in every facet of the offense.

Manningham also strikes me as being the team's most instinctual receiver besides, perhaps, Michael Crabtree. To borrow the sentiment of fellow front page writer James Brady, it just seems like Manningham knows what to do with the ball in his hands. He's not the fastest or most agile receiver on the team, but he's got great vision and awareness.

Watching Manningham play, you get the sense that he's just itching to break loose for a big gain. He's probably the closest thing the 49ers have to a player like Percy Harvin (I'm sure you remember him), and I completely expect him to continue being San Francisco's ‘chameleon' the rest of the season. 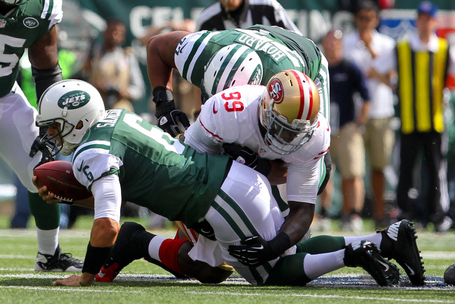 After failing to record a single sack against Minnesota, the 49ers defense dropped Mark Sanchez for three - two of which came from Aldon Smith. Smith was breathing down Sanchez' neck all day and technically had a third sack that was negated by a defensive holding penalty on Tarell Brown.

He came incredibly close on two other occasions that I can recall. In the third quarter, when the Jets' offense was on their own 4-yard line, Smith almost forced a safety. Then, in the fourth quarter, Smith got his fingertips on Sanchez' cleats to force an incomplete pass.

Despite the fact that Smith played almost exclusively on third downs last season, he recorded 14 total sacks - one sack short of breaking the all-time rookie record held by Jevon Kearse. This is Smith's first year as a full-time starter, and with 4.5 sacks through the first quarter of the season, he's off to a great start. 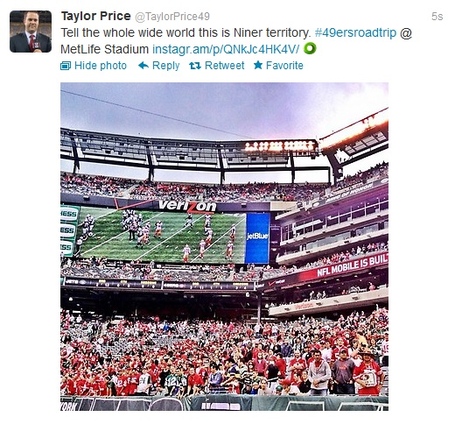 Not only did the San Francisco 49ers dominate on the field, they dominated in the stands as well. The Niners Faithful showed up in droves to support their team despite the game being played on the opposite end of the country.

I wasn't the only one who noticed.

"It looked like we were home today," said Frank Gore. "The fans following us - I'm proud of them, and I know they're proud of us. We just wanna keep working and keep winning for them."

By the fourth quarter, most of the green jerseys had gone home while the Faithful remained to savor the taste of victory.

"That's some major love. I was so ecstatic," said Aldon Smith, "You see all of our fans, and everybody else is gone. I feel like we took over their stadium."

"Giving back in Ohio" 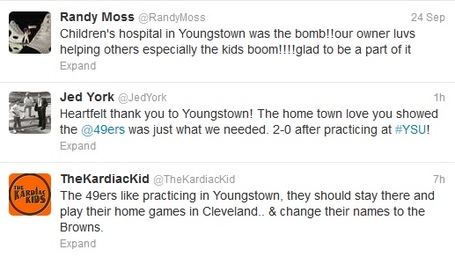 The 49ers are undefeated in games played after staying in Youngstown, Ohio.

Okay, maybe that isn't such a mind-blowing statistic as it's only happened twice - once last year and again this year - but there's no disputing the benefit of the between-away games stopover. It eliminates an extra trip back home, buffers a bit of that dreaded jetlag, and promotes some quality team bonding.

The 49ers made the most of their road trip this year. On Monday, they had an opportunity to meet legendary Cleveland Browns running back Jim Brown. Both players and coaches sat down with the Hall of Famer for lunch and got a chance to pick his brain.

"It was an honor. It was enlightening," said Coach Harbaugh. "I thought I learned some good things from talking to Mr. Brown. My dad has especially been a fan of Jim Brown's. They've met on several occasions, and this was my first opportunity to meet Jim Brown, and I really enjoyed our visit with him."

Later that afternoon, the 49ers attended charity events in the surrounding area including a visit to the Akron Children's Hospital in Boardman. The team spent time with various children who, in many cases, suffer from debilitating disorders or diseases. Following a demoralizing loss against the Minnesota Vikings the day prior, Randy Moss and his teammates found something to smile about. 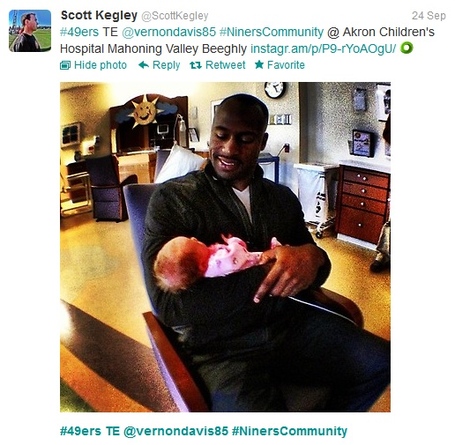 "It's good for the heart and good for the soul to give back any way that you can," said Moss. "I think it's great for the mind to really be able to come to see these kids, see their parents when they're feeling down and out, and put a smile on their face."

The visit was sure to put things in perspective for the 49ers. While they fight for first downs on the football field, the youngsters of Akron Children's Hospital fight for life behind closed doors.

"That's what life is about - happiness and seeing other people happy," said Moss. "For us to come over to this children's hospital, it was a blessing for us to be here."

The 49ers need not worry about hotel arrangements for a while as the next three games will be played at Candlestick Park. Next Sunday, San Francisco's stout run defense will be tested mightily as they host the explosive C.J. Spiller and the Buffalo Bills.

Harbaugh's words of wisdom are largely the same: stay modest.

"We'll take this win, and move on with humble hearts back to San Francisco, and get ready for the Bills."