We break down the news that Frank Gore visited the x-ray room after the 49ers 13-6 victory over the Seattle Seahawks.

The San Francisco 49ers emerged from a brutally fought game with a 13-6 win over the Seattle Seahawks. This was as physical as it gets, and it is safe to say the team will enjoy some time off to recover for next week's MNF showdown with the Arizona Cardinals.

One player who was seen wincing a bit late in the game was Frank Gore. Gore's last play came with about eight minutes left, after which Kendall Hunter spelled him the rest of the way with five rushes over a drive and a half. 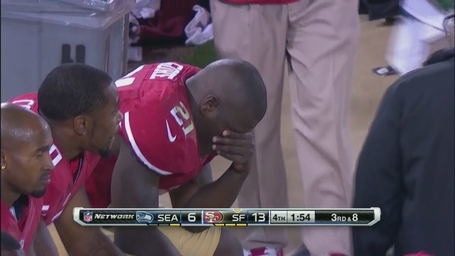 After NFL Network speculation that it was a back injury, Matt Maiocco got confirmation from Frank Gore that he bruised his ribs, but should be OK. Given how important Gore proved he is to making this offense go, eleven days until the next game will hopefully do some good things for his bruised ribs. Kendall Hunter did some solid work in relief, but I think we all would prefer a healthy Gore.