Share All sharing options for: The Booth Review – 49ers vs. Rams: “Candlestick stalemate"

Who would have thought that the NFC West-leading San Francisco 49ers would be tested so mightily by the last place St. Louis Rams? It was one of many trends that were broken on Sunday in a heavyweight bout that ultimately led to a no-contest, 24-24.

It was also pretty damn ugly.

Tim Ryan hit the nail on the head when he said two things can happen to a team over their bye week - loose screws can be tightened or they can fall off. For the 49ers, who were 12 days removed from action, the wheels were practically rolling off the wagon. Early on, the team looked out of sync, out of rhythm, and out of gas.

Coming into Sunday, the 49ers were the hardest team to score against in the league, surrendering an average of just 12.9 points a game. They gave up 14 points in the first quarter.

"We can't have starts like that, especially if we want to be in the top of the division," said cornerback Tarell Brown. "We understand that we slipped out of one today. [We] did a good job of coming back and fighting against adversity, but we know we can't play like that again."

In the first half of the season, the 49ers were fortunate enough to have stayed mostly healthy. On Sunday, they suffered two injuries - one to left guard Mike Iupati, and another to quarterback Alex Smith. Smith, on the run, received a vicious blow to the back of the helmet by Rams linebacker Jo-Lonn Dunbar. After capping off the drive with a touchdown pass to receiver Michael Crabtree, Smith was taken to the locker room to be treated for what we later learned to be a concussion. Fooch's note: Harbaugh later stated the concussion occurred on the ensuing 4th down sneak. 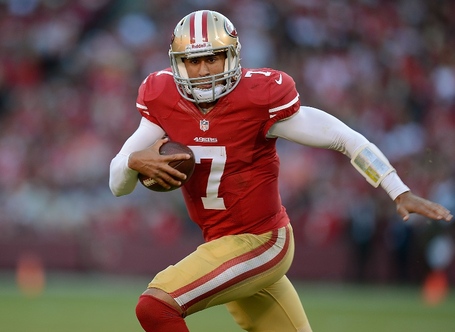 CAPTION: SAN FRANCISCO, CA - NOVEMBER 11: Colin Kaepernick #7 of the San Francisco 49ers runs around right end for seven yards and scores a touchdown against the St. Louis Rams in the fourth quarter of an NFL football game at Candlestick Park on November 11, 2012 in San Francisco, California. The game ended after sudden death overtime in a 24-24 tie. (Photo by Thearon W. Henderson/Getty Images)

"I thought I did pretty well," said Kaepernick, after the game. "Obviously, there is a lot of room for improvement and a lot of things I would like to do differently. I just went out there and tried to do what I could do to help this team."

After a slow start, Kaepernick lit a fire in the fourth quarter with a 7-yard touchdown run. Then, on the following kickoff return, Rams return man Isaiah Pead fumbled the ball at the 28-yard line. Darcel McBath recovered the fumble and returned it to the Rams' 20-yard line. One play later, Frank Gore was in the end zone to put the 49ers ahead 21-17.

The Rams responded with an 80-yard scoring drive with a touchdown reception by Austin Pettis before David Akers tied up the score to send the game into overtime.

Oh boy. Where to start?

The Rams won the coin toss and elected to receive. On the very first play of the drive, Sam Bradford threw a bomb to Danny Amendola for 80 yards. Jaw, floor...game, over. But wait, a yellow flag! The play was called back as the Rams were running an illegal formation.

St. Louis stalled and would punt the ball away, giving the 49ers an opportunity to end the game. After driving to the Rams' 23-yard line, the 49ers set up for a field goal. 41 yards? Pfft. Surely, victory was just a kick away. But wait, wide left! Akers misses.

On the next drive, the Rams would make it to San Francisco's 35-yard line to set up for - yet another - potentially game-winning field goal. This time, the ball went through the uprights. Hand, remote...game, over. But wait, a yellow flag! The score was negated due to a delay of game penalty. On the Rams' second attempt, this time from 58 yards away, Greg Zuerlein would miss.

The last play of the game would be a Sam Bradford pass to Brandon Gibson to the middle of the field. As the game clock counted down to zero, Jeff Fisher stood on the sideline unsure of whether or not he should remove his headset. And that was it. The first tied game since the Philadelphia Eagles and Cincinnati Bengals in 2009, and it was every bit as awkward and anticlimactic. 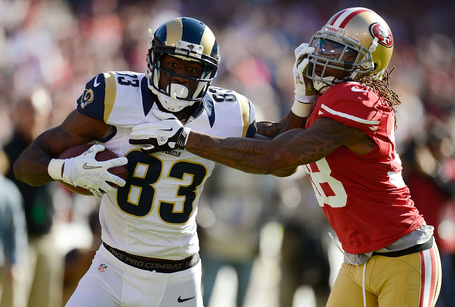 CAPTION: SAN FRANCISCO, CA - NOVEMBER 11: Brian Quick #83 of the St. Louis Rams pushes off of Dashon Goldson #38 of the San Francisco 49ers and goes into the endzone for a thirty-six yard touchdown play in the first quarter of their NFL football game at Candlestick Park on November 11, 2012 in San Francisco, California. (Photo by Thearon W. Henderson/Getty Images)

"Danny Amendola with the catch!"

"Danny Amendola for the first down!"

"Danny Amendola with the reception!"

It was the Danny Amendola show all day, and you can thank San Francisco's secondary for that. Amendola had five catches of 10 yards or more, not including the 80-yard reception in overtime that was negated by a penalty. He finished the day with 11 receptions for 102 receiving yards. In retrospect, that could have been a wildly successful drinking game. Darn...

Additionally, quarterback Sam Bradford passed for 275 yards and 2 touchdowns against San Francisco. It was Bradford's third-best game of the season for passing yardage. He also registered a QBR score of 82.0 - his season-best. 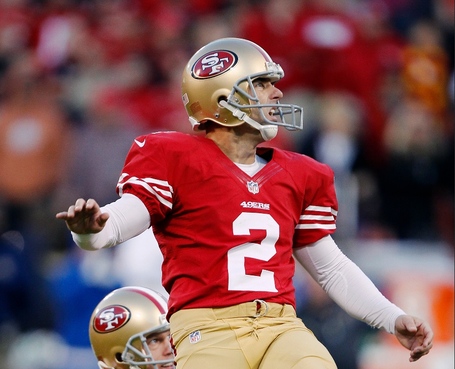 Call it the curse of the 63-yard field goal.

Since tying the NFL record for the longest field goal against the Green Bay Packers in Week 1, David Akers just hasn't been the same. It's hard to believe that, at one point, I was calling him "Golden Leg" Akers. Perhaps I'll assign that distinction to Andy Lee instead...

Akers has missed a league-worst six field goals this year (among kickers with at least 10 field goal attempts). In overtime, he had an opportunity to win the game for the 49ers after the Rams' first drive failed to yield any points. Akers missed from 41 yards away.

It wasn't his worst game this season statistically (he made just one out of three attempts against the New York Giants in Week 6), but it was perhaps the most heartbreaking. Akers successfully made a 33-yard attempt earlier in the game, and he drove it right down the middle. On the potential game-winner in overtime, the trajectory was bad from the start before sailing wide left.

Through the first eight games of the season, the 49ers only ever utilized backup quarterback Colin Kaepernick on trick plays, designed quarterback runs, and during garbage time. So when Alex Smith left the game due to a concussion, I was fascinated to see how he would handle a live-fire scenario.

In short? He performed quite admirably.

Kaepernick finished the day completing 11 passes from 17 attempts (65% completion rate) for 117 yards. In the fourth quarter, he made some key completions to Mario Manningham, Randy Moss, and Vernon Davis for big chunks of yardage before running the ball in himself for a touchdown score.

But Kaep wasn't perfect. He needs to get better with his downfield accuracy, sensing defenders in the pocket, and being a bit more decisive, among other things. But those kinds of mistakes are expected from a second-year player seeing his first significant regular season action.

What Kaep showed me on Sunday is that he may very well be the 49ers' quarterback of the future. For now? He's a more-than-capable backup, and I'm okay with that, because I believe Alex Smith, at 100%, gives the 49ers their best chance to win games. Before Smith left the game in the second quarter, he had completed 7 passes from 8 attempts for 72 yards and a touchdown.

Leave the quarterback controversy in Philadelphia.

Smith's status for Monday night's matchup against the Chicago Bears is still unknown, but if he'll be sitting out, Kaepernick will have another opportunity to prove his mettle against the NFL's most opportunistic defensive unit. And as I mentioned earlier, Kaepernick may not be the only backup quarterback to make the start as Cutler will also be questionable. If Cutler is unable to play, backup Jason Campbell will step in. That means Monday night's primetime matchup may very well feature two second-string gunslingers. 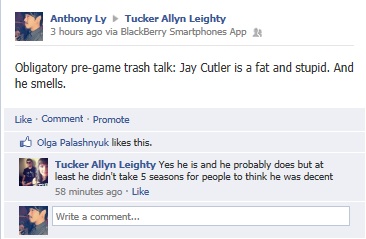